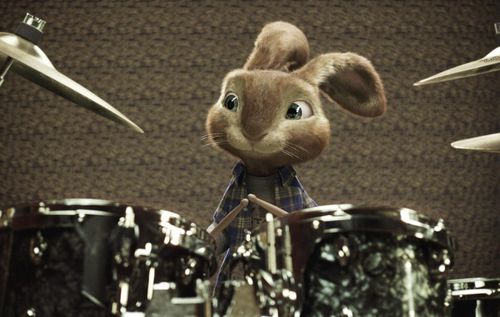 I’m sure Christians are used to seeing a grand perversion of Christmas at this point, but are they ready to see Easter fully stripped of its religious meaning? “Hop” Santa-fies the holiday to fit standard kid film fixings, turning up the color, unleashing adorable CG-animated characters, and offering impressively dated pop culture references, making a mild matinee ruckus that doesn’t feature much in the way of creative invention or comedic might. However, candyholics and fans of David Hasselhoff will be delighted.

Facing a future as the world famous Easter Bunny, young E.B. (voiced by Russell Brand) isn’t ready for the responsibility, ditching his candy manufacturing life on Easter Island for the bright lights of Hollywood, where the young rabbit hopes to become a star drummer. Fred O’Hare (James Marsden) is a twentysomething slacker who runs into E.B. late one night, taking the talking creature in, though unable to initially comprehend the magic of the moment. Bonding over their shared history of disapproving fathers, E.B. and Fred form a few plans, looking to make the furry drummer a star on a David Hasselhoff talent show, while the man-boy finds his interest leaning toward a career in the Easter arts. 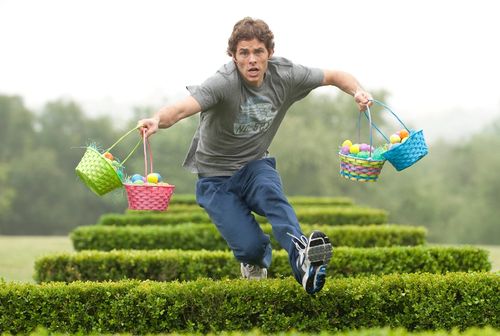 “Hop” isn’t an offensive picture, just one content to be perfectly middling. It’s an animated comedy that merges CG-animation with live action actors, doing so with a surprising technical prowess, with the picture guided by the same crew that produced “Despicable Me” last year. It’s a brightly colored, slightly daffy comedy that seeks to provide cartoon jokes while reinventing Easter as a holiday solely consisting of candy and egg dominance, even taking the action into a massive Wonkaesque sweets factory, where little yellow chicks (including the villainous Carlos, voiced by Hank Azaria) fashion chocolate and marshmallow treats all day, preparing glorious baskets for children everywhere. And how are these baskets of goodies delivered? By magical sleigh, of course, pulled by a swarm of flying chicks. This is still Easter, right?

It’s a film of vivid animated details, but little substance, with the script needlessly laboring over dueling tales of E.B. and Fred making something out of themselves and Carlos scheming to take over the holiday. Instead of dreaming up enthused silly business, director Tim Hill (“Alvin and the Chipmunks”) gets bogged down in the details, laboring to find relevance with the cringe-worthy Hasselhoff business, while instructing Marsden to act as though his feet were on fire. “Hop” is broad, but it didn’t have to be, especially with a supporting cast that includes a vocal turn from Hugh Laurie (as E.B.’s dad), while the wily Brand assumes center stage. The star bunny is a charming creation, gifted a certain verbal lift by the poppy Brit comedian, but E.B. never comes alive as an iconic lead character, scripted a hero role without actually possessing any valiant qualities. He’s a slob, destructive, paranoid (the “Pink Berets” royal guard of military bunnies is on the hunt for the runaway rabbit), and defecates jellybeans -- see, not exactly a charmer. 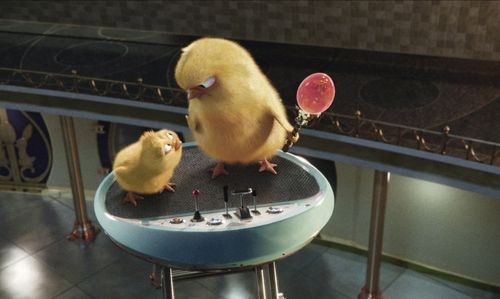 “Hop” plays loose with logic (even for a family film) and wheezes to a conclusion. While I’m sure younger viewers will delight in the candy buffet fantasy, “Hop” doesn’t try hard enough to become something enchanting and uproarious. A few laughs here and there, but most of the feature is pretty lazy when it comes to the monkey business of a rock drumming holiday bunny who, again, poops candy and wears flannel. 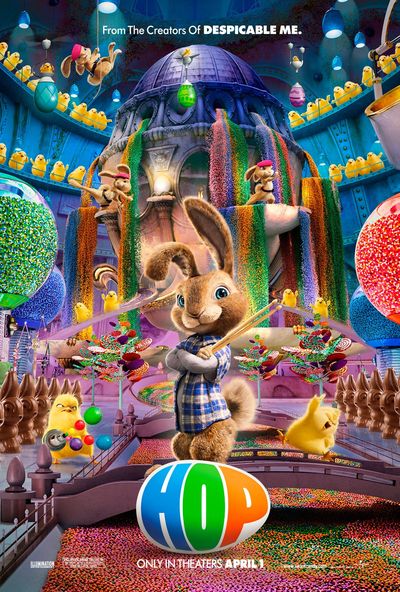