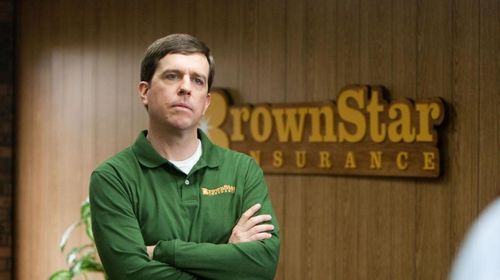 I’ll freely admit that I have a sensitivity to movies set in the Midwest, a place that I called home for the majority of my life. To most Hollywood productions, the Midwest is an alien landscape for hopelessly naïve folk going about their naïve business while the coasts take care of the culture and style for America. That’s not the Midwest I know. I shouldn’t take “Cedar Rapids” seriously as an incisive take on “flyover” country ethics, but the least this tepid comedy could do is provide a vibrant sense of humor. Instead, it’s a riff-heavy, wildly formulaic modern comedy that uses stereotypes and improvisations in a gentle, but tedious manner to bring the laughs.

A diligent insurance salesman in small town Wisconsin, Tim Lippe (Ed Helms) is offered the opportunity of a lifetime when his boss orders him to attend an important conference in Cedar Rapids to secure a valued industry honor. Having never left his town before, Tim is a little tweaked by the challenge, fearful to leave his lover, and former grade school teacher (Sigourney Weaver), behind. Once arrived, Tim is overwhelmed by his colleagues, including sensible Ronald (Isiah Whitlock, Jr.), blowhard Dean (John C. Reilly), and sure thing Joan (Anne Heche). Initially unable to enjoy himself, Tim grows to celebrate the gathering with drink, drugs, and sex, coming out of his shell at a critical professional juncture. 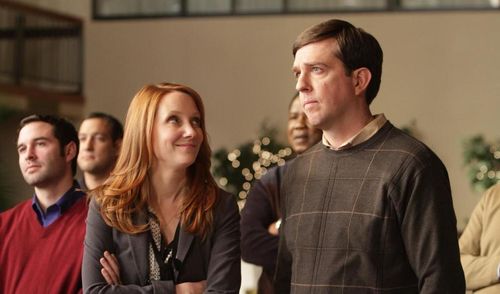 “Cedar Rapids” isn’t an ugly picture. There are too many gifted professionals both in front and behind the camera for the film to degenerate into a mean-spirited enterprise. Instead, the film plays softball, delighting in Tim’s childlike wonder as he prepares for a trip to the “big city” (the film was actually shot in Michigan), armed with travelers checks strapped underneath his clothes and nurturing general paranoia about the business of strangers. The contrasts and ironies are sturdily arranged by director Miguel Arteta (“Youth in Revolt”), who enjoys watching Tim squirm as he ventures out of his rural comfort zone, plunging the overwhelmed insurance ace into a relentless party zone filled with an assortment of comedians doing a mediocre job transforming into Midwestern business folk.

Brandishing broad accents and outdated clothes (a must for any Midwestern tale), the ensemble comes to play, using the script as a springboard for improvisations and weird little inside jokes that aren’t terribly funny (Whitlock, Jr., a former cast member of “The Wire,” makes two in-character references to the show). Admittedly, Reilly’s manic energy as partyhound Dean is impressive and plays directly to the actor’s gifts as a demented boob. Heche also shows appeal as Tim’s convention conquest, while being the lone actor capable of providing a faint sense of dramatic complication without derailing the whole film. The supporting cast also includes Kurtwood Smith, Alia Shawkat (as the hotel hooker), Stephen Root, and Rob Corddry, arming the picture with some heavy street cred in the comedy department. Too bad they’re saddled with flaccid screenwriting that does surprisingly little with the lively cast, encouraging the tossing of tepid one-liners to make an impression. 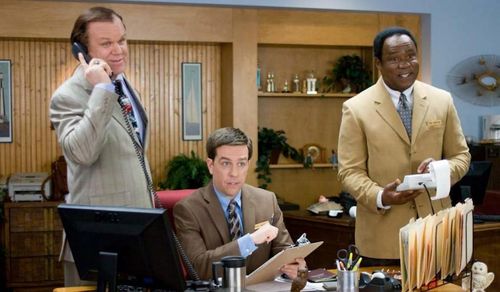 As for Helms, Tim isn’t much of a departure, as “Cedar Rapids” comes dangerously close to recreating his smash hit, “The Hangover.” The character’s sincerity is disarming, especially when Tim talks lovingly of the insurance industry in the middle of a city known for incredible flooding, but the rest of the performance is familiar, especially when chemical abuse and violent encounters begin to take hold of Tim’s long weekend.

If “Cedar Rapids” remained in a farcical state, perhaps it might’ve achieved a rewarding tone of mushrooming madness. Instead, the film seeks out a heart, as Tim begins to take his future into his own hands after witnessing how the big city insurance game is truly run. The sentiment is sweet, but awkward, especially when rubbed up against scenes of Tim smoking meth and getting into fistfights. Arteta doesn’t balance the broad with the genuine easily, leaving “Cedar Rapids” a largely laugh-free, erratic picture. 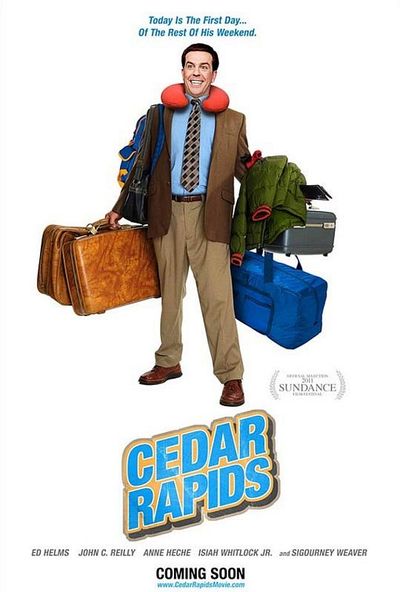