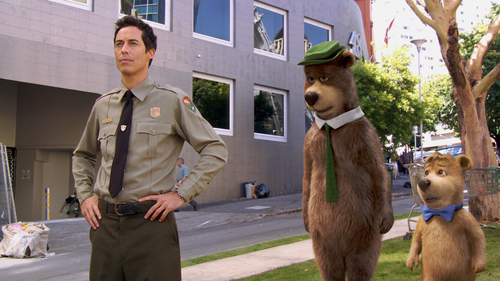 I wouldn’t classify “Yogi Bear” as a particularly superior movie, but considering the potential for disaster a property like this holds in today’s matinee marketplace, the finished film is far more palatable than expected. In fact, it’s actually pretty darn funny in small portions, tiny enough to fit inside the average pic-a-nic basket.

Deep in the heart of Jellystone National Park, a talking bear and his diminutive sidekick reside. Life for Yogi (voiced by Dan Aykroyd) and Boo-Boo (voiced by Justin Timberlake) is a daily struggle of larceny, spending their time formulating plans to separate park visitors from their delicious lunches. Hoping to keep the bear duo in line is Ranger Smith (Tom Cavanagh), a frazzled park employee also dealing with the numbskullery of his underling, Ranger Jones (T. J. Miller). When villainous Mayor Brown (Andrew Daly) threatens to close Jellystone and sell the land to developers, it’s up to Smith and the bears to find a way to radically increase park attendance, finding needed support from Rachel (Anna Faris), a nature documentarian the weary ranger takes an immediate shine to. 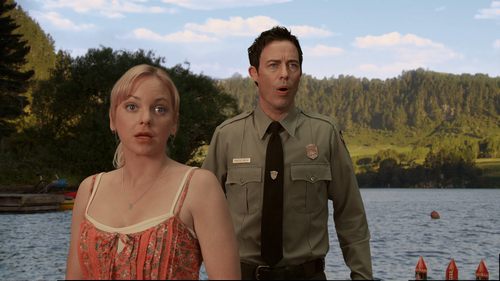 A legend in the animated realm, Yogi Bear has been entertaining audiences since his debut in 1958, even headlining his own animated feature film in 1964. To keep up with the times, Yogi has been scrubbed down with computer tools, entering the CG-animated battlefield with this new picture, gifted a new rounded appearance and celebrity voicing to keep the kids interested in the ravenous antics of a 52-year-old tie-wearing bear.

Mercifully, the screenplay and director Eric Brevig (“Journey to the Center of the Earth 3D”) respect the slapstick roots of the material, erecting a broad family comedy that keeps the bears hustling for laughs for the duration of the film’s ideal 75-minute run time. Not that the jokes connect routinely, but the liveliness of the picture is charming, as Yogi engages in mischief all over the park, looking to score a meal while dodging Ranger Smith’s pointed attention. This being 2011, references to flatulence and urination are made, but the picture keeps away from gross-out overkill, preferring the art of the woodland pratfall to the mysteries of the gastrointestinal system. A small victory, but one I will happily celebrate. 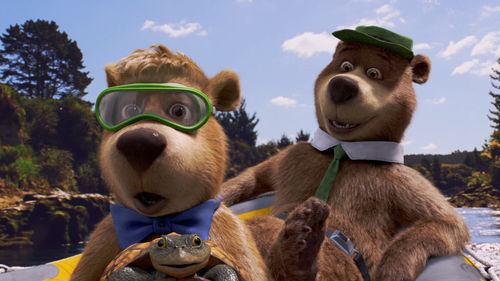 As the titular troublemaker, Aykroyd finds the appropriate Kramden spirit for Yogi, giving the role an entertaining spin of his own, breathlessly sustaining the character’s fever for stolen junk food (forget deforestation, Yogi’s real battle might soon be diabetes). Aykroyd’s amusing and committed, along with Timberlake, who brings acceptable chirp as Yogi’s pal/son/roommate/whatever Boo-Boo.

The human side of the film is less inspiring, with Cavanagh doing his best impression of Wonder Bread as Ranger Smith, and Miller confusing the tone of the picture by playing Ranger Jones as though mentally challenged, not simply dumb. It’s painful to watch at times. Blessedly, Faris is here to show the boys how jokes should be sold, seizing more than a few laughs as the slightly daffy filmmaker. She’s the movie’s MVP. Also hilarious is Daly, having a ball whooping it up as the evil politician -- a man with a diabolical plan to sell the park to the highest bidder, yet flummoxed by the complexities of a limo window. The 5.1 DTS-HD sound mix is expectedly jubilant with sound effects, supplying welcome directional activity for Yogi’s antics, with strong atmospheric support for Jellystone adventures, which range from simple strolls to most frantic slapstick encounters – there’s especially intense activity during a climatic rafting emergency. Dialogue is stable and crisp, offered more circular room to keep the comedy fresh, though the recreation of cavernous interiors is woefully artificial. Scoring is thin but pronounced, while soundtrack cuts offer a more vigorous workout. Low-end is hearty for the larger action set-pieces, providing a sturdy rumble. French, Spanish, and Portuguese tracks are also available. 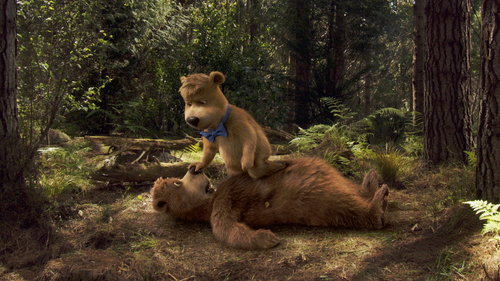 “Stand-In Shenanigans” (2:31) talks to Jimmy and Frazier, the two lucky actors who were chosen to play Yogi and Boo-Boo on set to help the production with scale before CGI efforts were applied.

“T.J. Miller Audition” (3:04) presents the video Miller sent in to secure the role of Ranger Jones, only the twist here is found with his finicky scene partner: a real bear.

“Voicing Yogi & Boo-Boo” (4:14) spotlights efforts from Dan Aykroyd and Justin Timberlake, who offered their own special spin on these iconic characters.

“Baskit Naber 2000” (2:00) inspects the merging of live action and CGI with the film’s slapstick flying contraption.

“Jellystone Park Jewel: Littering” (1:29) is a faux PSA with Ranger Jones, who extols the virtues of proper trash placement.

“Vote for Mayor Brown” (1:13) is a political commercial for the film’s villain.

“Sickness was Love” (2:22) is an intentionally low-fi music video from Ranger Smith, who sings about his feelings for Rachael.

“Tourism” (1:19) is a commercial for Jellystone Park featuring an awkward Ranger Smith and a host of camper testimonials.

“The Rapids” (3:14) covers the technical effort required to blend actors into a stunt-heavy sequence set on raging waters.

“Everyone Wants to be Yogi” (2:27) explores the love for the titular character from the cast, who recall their childhood affection for the bear.

“Building Jellystone Park” (3:22) investigates the production effort to recreate a cartoon forest in the middle of New Zealand. Cast and crew interviews show off the various set design details.

“Yogi Bear Mash-Up” (3:37) returns to the cast and crew, who basically explain the obvious, pointing out the similarities between the cartoon and the movie.

“Are You Smarter than the Average Bear?” is a game of picnic table concentration.

“Rabid Rider” (3:07) is a Looney Tunes short featuring the antics of the Road Runner and Wile E. Coyote. 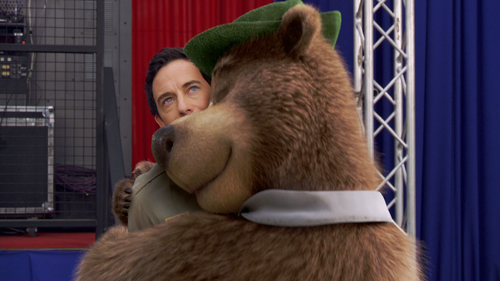 Political betrayals and the protection of endangered species pass for plot points in “Yogi Bear,” and while the conservation message is welcome, it’s hardly convincing. Still, I’ll take a few clichés over the sight of Yogi seductively shaking his rear to “Baby Got Back” in front of Ranger Smith and Rachel. I could’ve lived a long, happy life without seeing that. A handful of comedic miscalculations aside, the picture isn’t the disaster it should’ve been, bringing Yogi to a new, younger audience able to ignore the uninspired screenwriting and focus intently on the pie facials and flopping bear collisions. 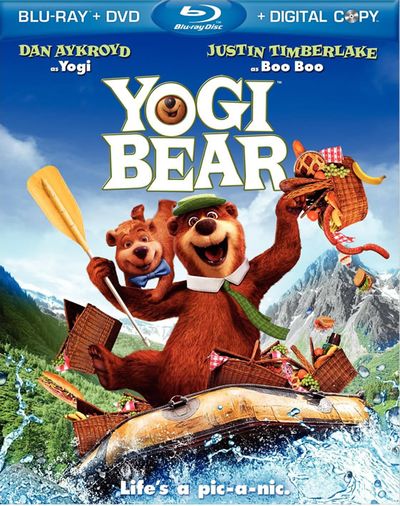