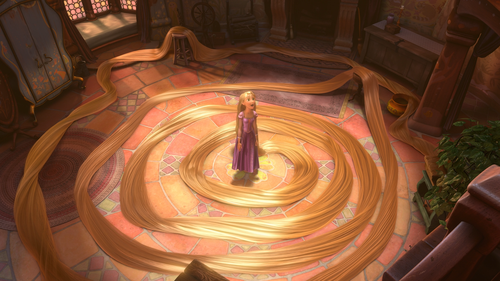 The CG-animated “Tangled” is perhaps Disney’s most calculated effort since 1997’s “Hercules,” often caught begging for love from every demographic. It’s a gorgeously mounted motion picture with impeccable artistic flair, but there’s something rattling around the engine of this film that doesn’t sit right, a desperation that grows more insistent as the movie motors along. Disney magic gives the feature a satisfying lift, but the ride is rocky, caught between the lights of Broadway and the battering ram comedy tempo of a Looney Tunes production.

Stolen from her royal parents as an infant, Rapunzel (voiced by Mandy Moore) has been raised by the villainous Mother Gothel (Donna Murphy), who needs the child’s magical mile-long locks to maintain her youthful appearance. Housed inside a tower, Rapunzel has been taught to fear the world, watching the kingdom grow from her windows, passing time with arts and crafts and palling around with her pet chameleon. Flynn Rider (Zachary Levi) is a vain professional thief who accidentally comes across Rapunzel’s hideaway while on the run from the criminal partners he betrayed and the horse he offended. Agreeing to escort a curious Rapunzel through a land she’s not familiar with, Flynn comes to understand the young girl’s value to Gothel and the limits of his own frozen heart, finding there’s more to the innocent adventurer than just lengthy hair. 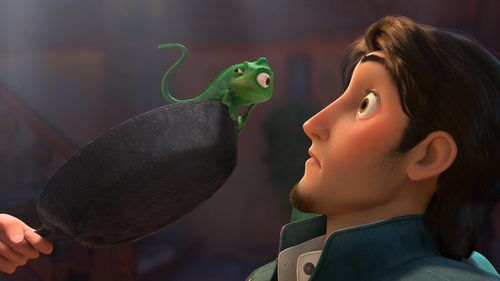 Following 2009’s “The Princess and the Frog” with another tale of storybook royalty, “Tangled” endeavors to hip up the old woes of Rapunzel, turning the fairy tale into an action/musical/farce concoction that plays to every corner of the room. Not that the broad sweep of appeal arranged by directors Byron Howard and Nathan Greno is distasteful, it’s just grabby, with “Tangled” pulled awkwardly between two wildly disparate tonalities, encouraging an unsettled ambiance as the production hovers restlessly over laughs, drama, and songs. The schizophrenia is not a deal-breaker, but it brings about a few cringe-worthy moments as the action tornadoes about.

One half of the film is devoted to song, with Disney stalwart Alan Menken brought into the fold to lend the film a Broadway polish, scrounging up a handful of tunes that prepare the interior life of the characters into a musical feast. Moore (the pop princess with a brittle vocal range) and Murphy (the theatrical pro smacking home runs) trade tunes as “Tangled” captures a classic Disney mood, with song and dance hitting a jubilant, communicative nerve that recalls the storybook yearn of “Beauty and the Beast.” The numbers are memorable, if not entirely hummable, yet they’re a fine return to form after the divisive zydeco strains of “Frog.” 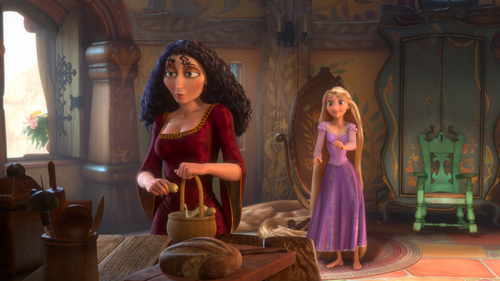 The other half of “Tangled” shakes the funny bone, with the character of Flynn acting as the film’s ambassador of comedy. Competently throated by Levi, the incessant sarcastic position of Flynn makes for a hero that one could happily see captured and removed from the film altogether. “Tangled” goes very broad with Flynn, giving him a Wile E. Coyote aura that’s tough to enjoy when the rest of the feature elects for a more traditionally regal stance. The screenplay’s irreverence is masterful for a film of more uninhibited energy, yet “Tangled” doesn’t juggle the madcap escapades with enough conviction, careening between scrapes and singing indecisively.

While a focal point never quite arrives for “Tangled,” the elegant craftsmanship of the feature is indisputable. Though CG-animated, the picture waltzes like classic animation, with expressive characters, elegant movement, and painterly backgrounds combining to give the picture a special sway. A film highlight is a sky lantern ceremony, where Rapunzel is finally offered a look at the glowing, floating visual that’s consumed her daydreams for most of her life. It’s a somber event turned into animation wonderment, helping “Tangled” achieve an emotional resonance it doesn’t otherwise earn. The opulence extends to lush forests, water antics, and a supporting cast of burly brawlers, who fall under the lost princess’s blonde spell, each one encouraged to live their dream. Each one imaged with tremendous detail and articulation. 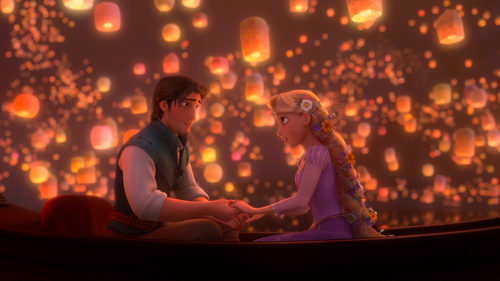 The AVC encoded image (1.78:1 aspect ratio) presentation is working with a sumptuously animated motion picture, leaving the viewing experience quite bold in every way. Colors are bountiful here, popping right off the screen, coated with a golden fairy tale glow, while moving to more cartoon hues, with Rapunzel’s light purple dress and Flynn’s blue outfit displaying urgent visual personality. Character designs are well cared for, with a lovely read of hair textures and movement, though it’s interesting to see most of the animated details are left to the backgrounds and objects, while the humans retain a smoothness to emphasize the fantasy of the story. Black levels maintain suitable information, making cave and evening encounters expressive, while overall clarity supports the gorgeous lighting found in the film, with Rapunzel’s glowing hair moments stunning in HD.

Frantic chases, musical numbers, and verbal fastballs fill the 7.1 DTS-HD sound mix, leaving the listening event bright and substantial. Dialogue is well portioned around the mix, with frontal action for the primary expositional interactions, while group efforts feel out the surrounds, creating a comfortable community experience. Voices are crisp and weighty. Directionals excitingly keep track of slapstick antics and pursuit activity, keeping the track immersive when the adventure heats up. Low-end is encouraged through larger acts of destruction. Scoring is pronounced, though blended well with the rest of the aural particulars, while the songs sound lush and inviting, revealing emotional purpose and dramatics with charming clarity. It’s an anxious mix with all types of animated activity, but the cinematic traffic remains in ideal condition. DVS, French, and Spanish tracks are also included. 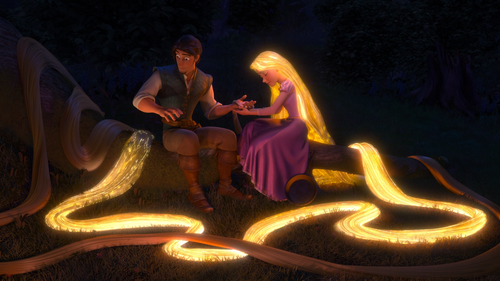 “Deleted Scenes” (12:36) are three unfinished encounters that find Rapunzel and Flynn discovering the brutish charms of the Jaunty Moose pub (changed for the final picture), enjoying some bonding time in the back of a caravan, and encountering a fortune telling monkey. They are viewed with introductions from directors Nathan Greno and Byron Howard.

“Original Storybook Openings” (7:59) are two deleted attempts to introduce the story with a more Disneyesque fairy tale spin, presented here in their unfinished state. They are viewed with introductions from directors Nathan Greno and Byron Howard.

“50th Animated Feature Countdown” (2:03) is a fun reel of Disney animated accomplishments, working through time from “Snow White” to “Tangled.” All you Disneyphiles should consider this an unofficial guessing game.

“Extended Songs” provide elongated life to “When Will My Life Begin” (3:35) and “Mother Knows Best” (4:17). The scenes are unfinished and are viewed with introductions from directors Nathan Greno and Byron Howard.

“Untangled: The Making of a Fairy Tale” (12:28) is a bouncy featurette hosted by Mandy Moore and Zachary Levi, who take viewers through the extended history of the project, dating back to the 1940s. Interviews with cast and crew itemize the effort to contemporize the story, shape the characters (Flynn’s design required input from female Disney employees), and tackle intense animated challenges (long hair being a primary frustration). 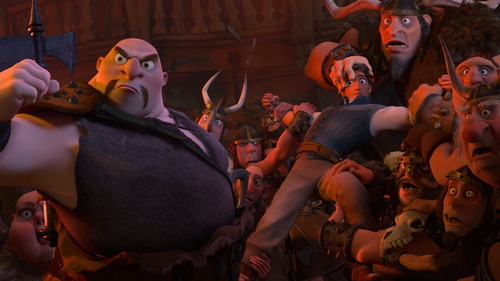 “Tangled” doesn’t challenge Disney storytelling procedures in the least, but it has its charms, perhaps best viewed with the sound turned all the way down, offering the sumptuous, jubilant animation what it truly deserves: silence. 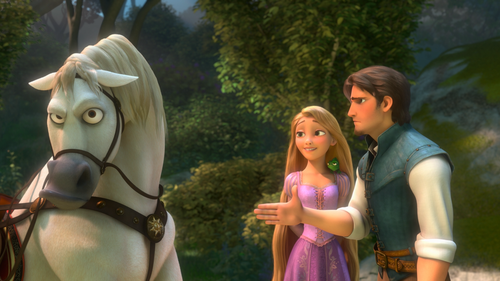 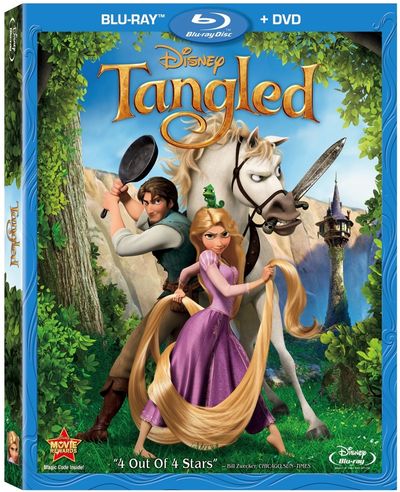