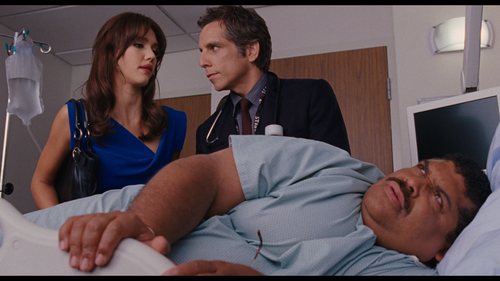 When heart problems force him to consider the next in line to lead the Byrnes Family, Jack (Robert De Niro) is reluctant to make his hapless son-in-law, Greg (Ben Stiller), the “Godfocker.” Raising twins with wife Pam (Teri Polo), Greg is having trouble juggling the demands of home life and his work as a nurse, a problem exacerbated by the forward attitude of pharmaceutical rep, Andi Garcia (Jessica Alba). Hoping to guide his family his own way, Greg finds his efforts thwarted by Jack’s parental vision, his own growing paranoia, and the reappearance of Kevin (Owen Wilson), who’s back to stealthily seduce Pam. While hopeful for the new generation of Fockers as they apply to a prestigious private school, Jack can’t help but insinuate himself in Greg’s life, creating tension as the flustered nurse falls in and out of wacky adventures and misunderstandings. 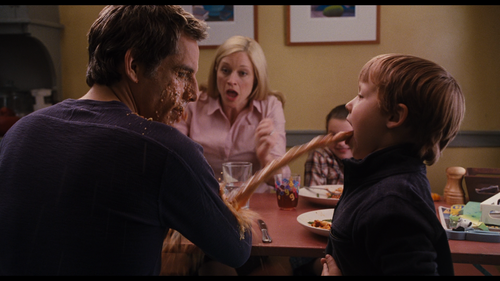 2000’s “Meet the Parents” (yes, it was that long ago) was a solid 45 minute idea that’s somehow been stretched into three feature films. Originally a zany vehicle for De Niro to play his bruiser image for laughs, the Focker saga has found greater inspiration in the staging of gross-out incidents, more consumed with delivering literal gags than comedic ones. “Little Fockers” keeps the tradition alive with puke, fart, and erection encounters, placing tremendous emphasis on simplistic jokes that pander rabidly to the lowest common denominator. It was passable merriment in “Meet the Parents,” mildly irritating in “Meet the Fockers,” but it’s become downright repugnant for “Little Fockers.”

Though the directing credit is awarded to Paul Weitz (“About a Boy,” “American Dreamz”), there’s little sense of artistic guidance here. Weitz is trapped in pure sitcom mode, arranging the mishaps and humiliations with all the excitement of a man sweating to please his demanding producers. Whatever life was available in the series before is long gone for “Little Fockers,” which is about as uninspired as a second sequel can be. Jack and Greg still passive-aggressively locking horns? Check. Kevin still a romantic rival? Check. Comedic mileage still pulled out of the iffy Focker name? Check. Writing on the level of a rejected “Three’s Company” script? Check. Throw in Deepak Chopra and Harvey Keitel cameos, a pill-blasted Jessica Alba stripping down to her underwear and hurling herself into a muddy hole, and some heart attack jokes (oh, the hilarity), and “Little Fockers” is a parade of randomness searching for a reason to be. 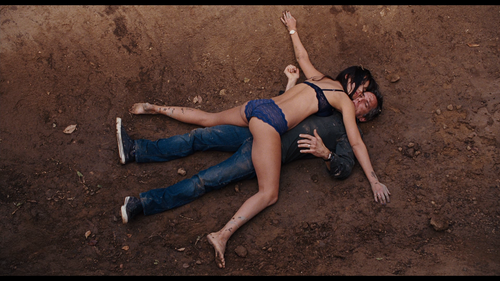 The cast looks bored out of their minds, downshifted into paycheck speed with acting that only requires grimaces and bug-eyed reactions. Granted, a script that includes a moment where Greg is forced to inject adrenaline into Jack’s penis to quell an overly medicated erection wouldn’t inspire professional confidence in any actor, but the sleepy eyes of sequelitis are rampant among the cast, who go with the flow knowing this malarkey already worked twice before. Only Alba generates smiles in the film, playing up the revolting spunk of a desperate sales representative -- she’s all knuckle bumps and creepy nicknames, and 1000 times more alert than the rest of the ensemble. “Little Fockers” needed more of her energy.

If you happen to be renting the picture to watch Barbara Streisand and Dustin Hoffman reprise their roles as Greg’s sexually active parents, I’ll rip the band-aid off now: they’re barely in the feature. “Little Fockers” doesn’t make room to play around with the big Fockers, pushing the screen legends to the background, leaving more time for Greg to get his face barfed upon. Yay. Even more insulting is how the actors barely share any scenes together, as Hoffman was added into the film at the last minute, having skipped principal photography for reasons I now understand. Giving Roz a sex education talk show and sending Bernie to “Spain” only ruins the magic of the pairing, forcing Weitz to scramble to maintain their chemistry without the actual participation of the actors. 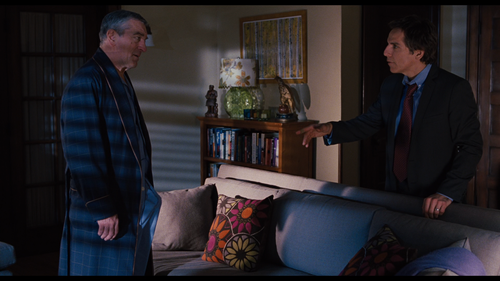 The VC-1 encoded image (1.85:1 aspect ratio) presentation enjoys a remarkable sense of clarity, which brings out all the icky and domestic details of the frame, with the more frantic slapstick events handed a superb HD translation. Even better, it’s now incredibly easy to spot where the film’s reshoots were inserted into the feature, with wigs and make-up changes quite obvious. Colors are in excellent shape, making a dynamic impression for this frivolous motion picture. Blues are especially potent, jumping off costumes and eyes with disarming power. Skintones waver a bit from scene to scene, with pert pink hues missing on occasion. Shadow detail secures frame information, making sense out of the darker interiors and evening sequences.

The 5.1 DTS-HD sound mix is an active, supportive aural effort, providing an engaging experience with a nice grasp of atmospherics, ranging from family gatherings to elementary school visits. The more charged comedic encounters are instilled with useable directional movement (the squishy and crunchy particulars are all accounted for), while filled out some to kick up the low-end. Dialogue is never clouded or stepped on by the scoring, feeling out the surrounds in small doses when all the characters converge inside a single room. Soundtrack cuts are hearty, making a nice impression. DVS, Spanish, and French tracks are also available. 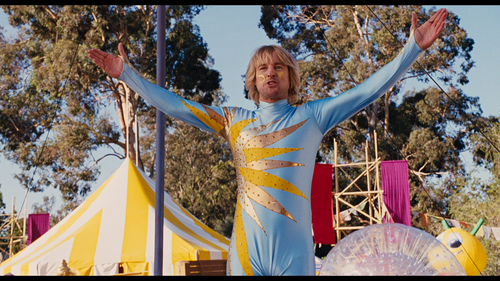 “Alternate Opening” (3:36) offers a dreamscape horror show for Greg, caught marrying his worst nightmare while Pam and Kevin stand by and watch.

“Alternate Ending” (3:15) brings about some closure for Alba’s character, while reinforcing Greg’s discomfort with Kevin’s attention toward Pam.

“Deleted Scenes” (14:19) expands roles played by Harvey Keitel and Kevin Hart, further explores Pam-centric tension between Greg and Kevin, builds Laura Dern’s part as a love interest/stalker for Kevin, offers some post-coital giggling between Bernie and Roz, and observes the strain between Jack and Bernie during a hospital visit.

“Gag Reel” (7:02) highlights a routine collection of mix-em-ups, displaying the giggle fits and clumsiness of the cast.

“The Making of a Godfocker” (15:04) is a highly promotional featurette, more concerned with reinforcing the “fun” the cast and crew had while making the film than exploring a substantial portion of its creations. Cast and crew interviews are animated (most conducted on-set), but the flow is often disrupted by numerous film clips.

“Bob and Ben” (4:37) reflects on the working relationship between De Niro and Stiller, who recall the origins of their roles and their personal friendship during the film’s junket.

“Ben and Owen” (5:29) turns attention to Stiller and Wilson, again tracing personal and professional history, while recalling some of their greatest triumphs and cinematic failures.

“Bout Time” (4:02) isolates the climatic fight sequence between Jack and Greg, chatting up the considerable stunt and comedy effort.

“The Focker Foot Locker” (1:40) collects and burns through every utterance of the name “Focker” found throughout the franchise.

And a Theatrical Trailer is not included. 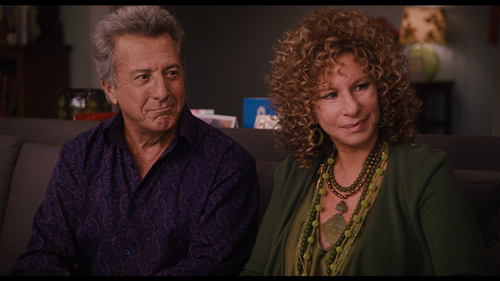 “Little Fockers” is utterly lazy and unfunny, cooked up to cash in on a wheezy franchise built out of cheap thrills. What’s missing here is a sense of family, especially after three pictures, rewarding the viewer with a full sense of domestic unity from an acquainted bunch of actors. Instead, there’s another round of insipid gags performed by a revolving door troupe more interested in the zeros on their paycheck than the quality of their cinematic output. 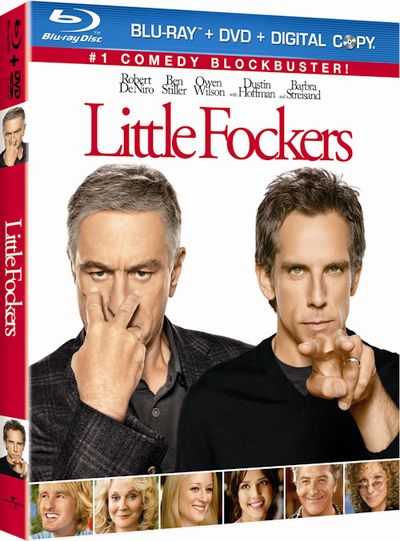