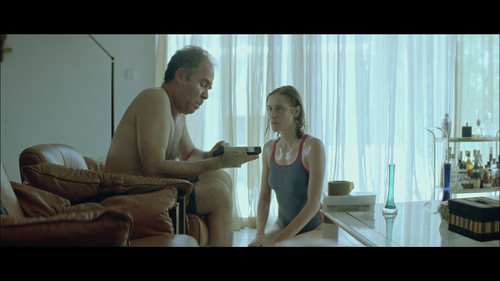 “Dogtooth” recalls the wondrous heyday of the Dogme 95 film movement, once spearheaded by Lars von Trier. Though enjoying some degree of polish, “Dogtooth” nevertheless approaches the concept of dehumanization with a gritty, free-flowing tone, permitting the film a genuine sense of surprise. It’s a grotesque illustration of inhumanity and feral instinct, but “Dogtooth” is an absolutely hypnotic motion picture, attaining a nauseating sense of self-destruction in a thrillingly art-house manner that’s been absent from the screen for far too long.

Somewhere in the middle of nowhere lives Father (Christos Stergioglou) and Mother (Michelle Valley), who reside on a fenced-in property with their children, Son (Christos Passalis), Younger Daughter (Mary Tsoni), and Older Daughter (Aggelki Papoulia). For reasons not immediately clear, Father has shut off the kids (who look to be in their mid-20s) from the real world, infantilizing them by extending their innocence, keeping them insular in a home where a “zombie” is a little yellow flower, airplanes have the potential to fall from the sky and become toys, and cats are demons to be feared. The fantasyland also requires a strict sexual schedule to keep Son in line, necessitating the services of a hooker named Christina (Anna Kalaitzidou). Living peacefully in this toxic reality, the family dynamic is soon disrupted when Older Daughter begins to crack under the strain, believing her maturity is at hand (an event signaled by the loss of a dogtooth). 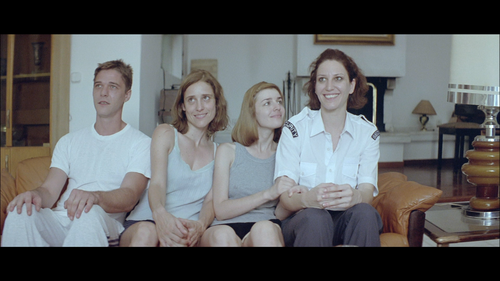 It’s rather astonishing to see how seamlessly director Yorgos Lanthimos keeps “Dogtooth” in line. What could’ve easily been insufferable performance art is instead alive with dense thespian nuances and enthralling passages of pure behavior. While I’m sure the film can be absorbed as some form of political allegory, it’s more magnetic as a study of psychological disease and perhaps the ultimate statement of parental control.

With sequences of abrupt violence and graphic sexual interactions, Lanthimos keeps “Dogtooth” bubbling, never losing the picture to a simple path of provocation. Instead, the picture slowly draws the viewer into this hellish place of misinformation, watching as the three “kids” work through their day playing dangerous games of endurance, finding their natural curiosity thwarted by their parents, and remaining fearful of any new addition to their tightly controlled environment. The performances here are exceptional, capturing a flurry of mental activity within the siblings that’s constantly being pruned by Father. These are brave actors, and their commitment to an unraveled sense of self provides “Dogtooth” with a difficult reality it wouldn’t otherwise have.

Also exemplary is the cinematography by Thimios Bakatatakis, which sets a striking anamorphic mood for the picture, often isolating acts of sexual manipulation and aggression with inventive framing, maintaining the observational urge of the film and its inherent horror. 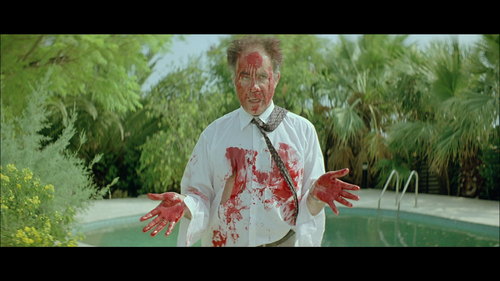 The AVC encoded image (2.35:1 aspect ratio) presentation on “Dogtooth” fully captures the film’s visual intent, with an evocative transfer that retains the picture’s immediacy and violence. Though not a lush feature to begin with, colors seem properly charged when specialized moments arrive, with blood reds and aqua blues popping out some, while the film’s sun-kissed yellow look is effortlessly communicated. Skintones are natural, while shadow detail is supportive, delivering a hefty grain presence when evening encounters arrive. Clarity is excellent, with all the macabre particulars served well here, with wounds and askew sexual content particularly vivid. There’s minor print damage throughout the presentation as well. 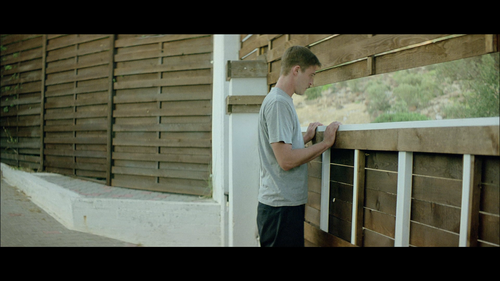 “Interview with Director Yorgos Lanthimos” (12:57) is a darkly lit, English-language conversation with the filmmaker, who walks through the inspiration for the screenplay and the performance challenges. Talk of happy accidents during filming and divisive audience reaction makes this chat something of a mini-commentary, well worth a look.

“Deleted Scenes” (5:27) contain a musical moment of expression from Father, a performance of “Fly Me to the Moon” from the children, and Older Daughter’s bathroom tribute to “Flashdance.”

A Photo Gallery with 15 stills is offered. 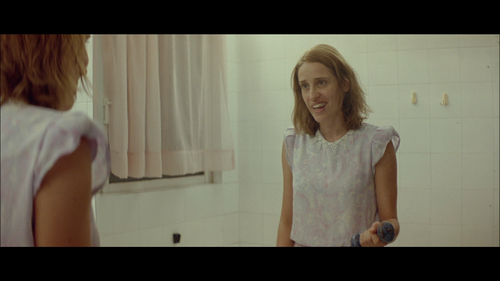 Christina is the spoiler in this household, introducing carnal gamesmanship and outside cinematic influence to the naive group, which helps to weaken Father’s power. “Dogtooth” soon moves into increasingly frightening revelations and acts of independence to tighten the unease, but the stranglehold of the direction remains assured. “Dogtooth” isn’t the easiest picture to describe, which is a positive attribute. It’s something to be experience, letting the insanity settle in the pit of your stomach, conjuring fear of what lies ahead. 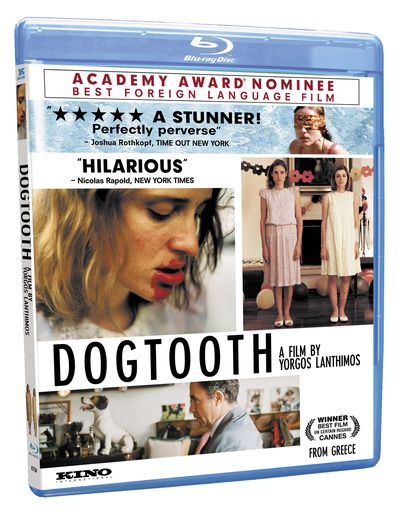