Presumably made to please Australian kiddies during matinee hours, “BMX Bandits” has grown to become a considerable cult hit in a few film geek circles, made famous for its attention to hot wheels and for employing Nicole Kidman at her fuzziest, here in her very first feature film role. While it’s best approached as an irresistible time capsule, the picture remains a consistently engaging adventure film, with colorful bikes and a bright cast eager to maintain a high-flying spirit of citywide Sydney pursuit.

P.J. (Angelo D’Angelo) and Goose (James Lugton) are a pair of wisecracking BMX riders who accidentally smash their bikes into a row of shopping carts, corralled by frustrated store employee (and BMX daydreamer), Judy (Nicole Kidman). Eager to land new rides, the trio set out to make money, only to stumble across a case filled with powerful walkie-talkies. Selling the radios all over town for big bucks, the gang comes to realize they’ve crossed into dangerous territory when a pair of goons, Whitey (David Argue) and Moustache (John Ley), show up to reclaim their property for criminal mastermind, The Boss (Bryan Marshall). Now on the run, P.J., Goose, and Judy tear off into the city, hoping to evade capture using their youthful cleverness and the sheer pedal power of their brand new bikes.

Directed by Ozploitation legend Brian Trenchard-Smith (“Stunt Rock,” “Turkey Shoot”), “BMX Bandits” is a harmless offering of trend-snatching fluff, kept alive through sharp performances, stunning locations, and the inherent coolness of badass BMX stunt action. Trenchard-Smith doesn’t hide his intentions in the least, happily serving up the slapstick and near misses as our teen heroes look to evade trouble at every turn. The picture is breezy, action-packed, and rich with Aussie humor, keeping to a simple routine of rolling shenanigans that never bores, thanks to a directional effort concentrated on the necessities of B-movie entertainment.

Trenchard-Smith doesn’t need much in the way of a budget to create exciting cinema. Just hand the man explosives, an anamorphic lens, and a game cast, and he’ll whip up something appealing, preferably with a saucy Aussie wink.

Unexpectedly, hardcore BMX action doesn’t actually enter the picture until the second half, with much of the early going devoted to bonding scenes with the three main characters and an extended chase sequence set inside a cemetery. That’s all well and good, with a few satisfactorily staged suspense moments, but the real draw here are the bikes. It’s that sensation of youthful agility that makes “BMX Bandits” such a charmer, with Trenchard-Smith giving viewers an admirable run of tricks and stunts (most goosed with lightning synth stings), while also using his locations masterfully, following the gang as they ride through malls and spin around beaches, even making use of local water slides to creatively ditch the baddies. The picture has a winning momentum and a welcome juvenile authority, while offering insanely clear cinematography from John Seale to provide maximum naturalistic eye candy. Most directors would likely dread the “BMX Bandits” filmmaking assignment, but Trenchard-Smith takes the challenge seriously, making a mild cartoon with absolute care, clearly relishing his time arranging bouncy bike action and broad comedy.

As for Kidman, it’s awfully strange to see the superstar smack dab in the middle of her adolescence, before her maturation into serious work. Before her access to hair straighteners. She remains a feisty, commanding screen presence, contributing some heft in the acting department along with her young co-stars. Working with a script that treasures one-liners and primary colored urgency, the cast brings charisma and a swell sense of timing to the picture, with Lugton stealing scenes as the sarcastic Goose. Curiosity about Kidman’s work here will undoubtedly draw viewers, but the ensemble proves to be a potent weapon in the director’s arsenal, giving the picture startling personality before it’s back on the chase, pedaling around the sheer splendor of Sydney.

The AVC encoded image (2.35:1 aspect ratio) presentation looks magnificent for a 28-year-old cult film. With minimal print damage, “BMX Bandits” almost appears brand new, boasting a crisp and clear viewing experience that breathes fresh home video life into a VHS and basic cable staple. Colors are dazzling, with competent separation that manages the various hues to full effect. Blues (sky shots are gorgeous) and reds are pushed superbly, summoning an evocative sense of Sydney and the world of the teenage bike rider. Costumes and helmets jump right off the screen, while the new clarity also reveals the true gender of Kidman’s bike double (a total dude). Shadow detail lacks the same muscle, with murky evening sequences failing to sustain visual information. Again, for a fringe title, this disc looks striking in the all the right ways, communicating the lighthearted nature of the material and its bold, graphic look.

The 2.0 DTS-HD sound mix isn’t quite the aural event hoped for, yet the track sustains the 1983 theatrical intensity of the picture. Directionals are subdued, though the pleasing power of the ride sequences still remain, with scoring cues holding to a steady rhythm, never intruding on the action. Large stunt set-pieces bring some low-end activity, but it’s a thin effort, more concentrated on dialogue exchanges and atmospherics, which sound healthy. Outdoor adventures retain their environmental activity, and soundtrack cuts are crisp and supportive. Exposition and comedy is never obscured, and when the antics take on a larger group effort, the excitement and crowds elements are warmly articulated.

The feature-length audio commentary with director Brian Trenchard-Smith is a weird mix of praise and disappointment from the filmmaker, who’s honest about his editorial mistakes, though not soured on the film in the least. Plowing through the picture sharing his tricks and objectives, Trenchard-Smith is a confident commentator (joined in the last act by his son), gamely dissecting “BMX Bandits,” revealing what he brought to the film and pinpointing the efforts of the stunt crew. Perhaps the most engaging topic is an exploration of the awesome locations, with Trenchard-Smith practically acting as a representative from the Australian Tourist Board, making a convincing case for relocation. Some play-by-play is present, but the majority of the conversation is focused and revealing.

“BMX Buddies” (38:16) does an impressive job condensing the “BMX Bandits” experience down to featurette length. Cast and crew interviews are refreshingly candid and amazed, reflecting upon a low-budget film that managed to stand the test of time. Talk of development and shooting brings out a special light in the interviewees, who fondly recall the filming experience, with Trenchard-Smith and co-star Lugton supplying the most candid memories. Obviously, Kidman isn’t here to discuss her work, and it’s refreshing to see the mini-doc confront her negative statements about the picture, examining her need to be taken seriously as an actress, even at a young age. Talk of international release, rating controversy, and Quentin Tarantino love fill out the run time, making for a thoroughly entertaining sit.

“Nicole Kidman on ‘Young Talent Time’” (2:33) is a 1983 clip from an Australian kiddie program, showcasing the 16-year-old star awkwardly selling her film.

I find it hard to dislike a film that opens with a bank robbery executed by men in pig masks and concludes with a triumphant foam fight straight out of a silent film. All “BMX Bandits” aims to do is please, and the production accomplishes its goal effortlessly, providing a refreshing sense of artistic concentration and a retro blast of childhood innocence, when the whole world was something to roll on through, ideally on the coolest two wheels money could buy. 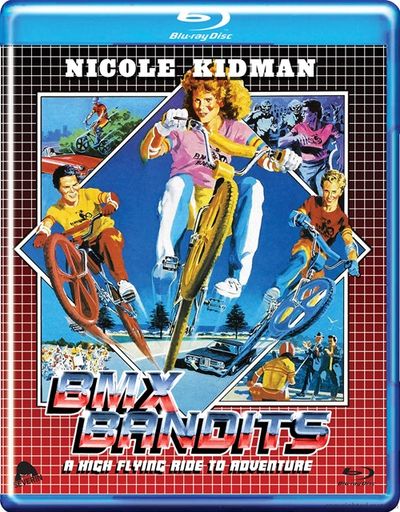