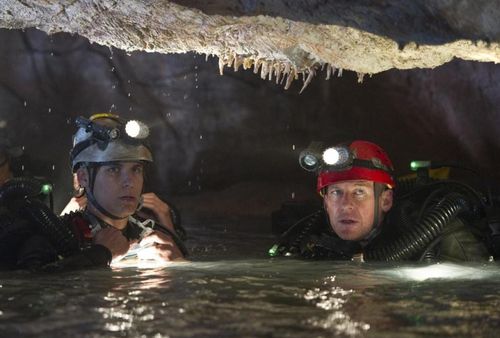 One would think that a simple spelunking disaster scenario would be enough to fill the running time of “Sanctum.” After all, the inherent danger of caves and raging waters is a compelling cinematic obstacle course on its own, supplying vital chills and spills needed to mount a successful thriller. “Sanctum” isn’t satisfied with the visceral basics, instead looking to engage the audience through dramatic cliché, leaving a nifty premise to wither while lifeless actors spout rotten dialogue and an unimaginative director stages substandard action set pieces. While teeming with promise and the marquee value of James Cameron as an executive producer, “Sanctum” is a deathly dull, criminally obvious feature film. In 3D. But of course.

Looking to conquer one of the last unmolested areas in the world, expert spelunker Frank (Richard Roxburgh, “Moulin Rouge”) and his team have lowered themselves down into a massive cave located in Papua New Guinea, looking to help thrill-seeking playboy Carl (Ioan Gruffudd, “Fantastic Four”) make his exploratory mark. Facing difficulty with rebellious son Josh (Rhys Wakefield), Frank prepares for a major dive that will take him to spaces unseen by humankind. When a typhoon breaks out above ground, the rushing waters manage to trap the group in the bowels of the cave, leaving Frank in a precarious position, forced to come up with a plan that will allow them to escape a treacherous area they are unfamiliar with. Fighting incompetence and disaster at every turn, Frank and Josh learn to bond again as they struggle for survival.

The marketing for “Sanctum” trumpets the fingerprints of Cameron to help siphon off the magic dust left behind by his 3D behemoth, “Avatar.” It’s a clever way to entice moviegoers into theaters, but let’s face the reality here: Cameron had little to do with “Sanctum,” which is primarily an Australian thriller that found a particularly influential fairy godmother. However, after witnessing the heartbreaking mediocrity of “Avatar,” perhaps Cameron was more involved here than I suspect. 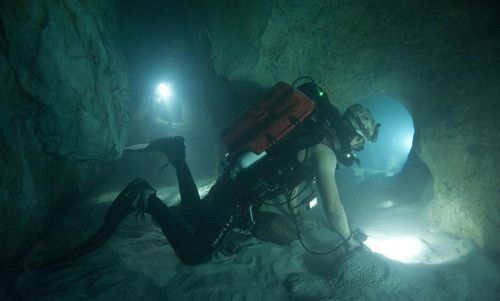 Credit should rightfully go to screenwriters John Garvin and Andrew Wright, who allegedly endured his own real-life cave escape scenario, which served as inspiration for the script. Peeling away the reality of the moment, the writers serve up an unappealing series of trite conflicts for Josh and John, pounding in a bickering father/son subplot to humanize these cardboard characters. Cruelly, the pair only deploys the most hackneyed verbal exchanges around, even reaching for poetic profundity with a Coleridge quote to class up the joint. There’s no raw appeal as the dire reality sets in, with each character assigned their own minor arc and protracted dismissal. The writing isn’t stimulating or concise, making room for distasteful misogyny (the female characters are all reckless idiots) and grunted exposition that attempts to tangle something that should be played as crisply as possible.

And to pour salt in the wound, the picture opens with a needless flash-forward, revealing the survivors of the cave event before the adventure has even begun. The purpose of the major spoiler is never revealed.

The primary sin of “Sanctum” is that there’s no reason to care about these struggling spelunkers. They’re all one-note and obnoxious, making their eventual demise a relief, not waterlogged tragedy. Director Alister Grierson botches the dramatic firepower, keeping the group in a constant state of irritation: a realistic feeling, sure, but one that’s infuriatingly repetitive, emerging from tedious actors working against the elements and an extraordinary amount of iffy looping (making the performances all the more artificial). The performances are stale, but they’re written that way, simplified into routine hysterics to remind viewers that caves are serious business. 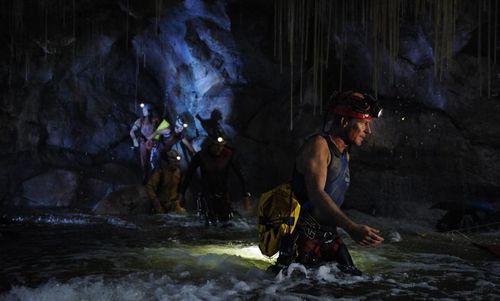 “Sanctum” would’ve been far more effective if the characters kept quiet and allowed the visuals to do all the talking. Grierson has an amazing playground to work with here, with limitless potential for claustrophobic antics of snug cave exploration, along with underwater terrors as oxygen and light sources are slowly depleted. And there’s this whole addition of 3D, which is intended to provide a glorious sense of environment and scope to the modestly budgeted picture, but mostly registers as hokey, rarely finding a scintillating purpose or robust depth of field. There’s a lot of visual activity here, but no excitement. Instead, the director feebly stages the numbing confrontations and physical exertion, making the whole effort feel like a glorified basic cable movie.

Unfortunately, there are no demons or aliens to greet the survivors at the bottom of the cave, though I fail to see the harm of such a wild addition. Some insanity might’ve jolted this exceedingly uninspired picture awake, giving Grierson more to do than arrange flavorless arguments and humdrum action. In 3D. But of course. 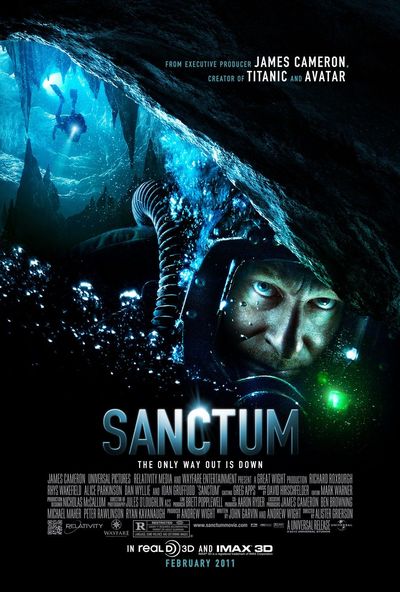