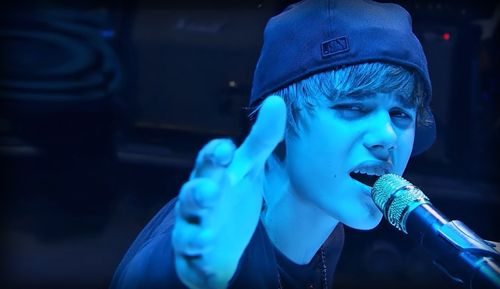 Stepping in the substantial cinematic footsteps of titans Miley Cyrus and the Jonas Brothers, pop starlet Justin Bieber assumes command of her own big screen 3D concert film. Actually, “Never Say Never” more of a sweet sixteen birthday celebration for the adolescent singer, showcasing Bieber commemorating her ascent into adulthood, surrounded by screaming hordes of blushing tween girls ready to pledge their everlasting allegiance to the Beeb, at least until something hotter comes along. Somehow, I doubt that’s ever going to happen.

Born inside a Buddhist monastery in Lhasa, Tibet, Bieber displayed greatness fresh out of the womb, impressing doctors and grizzled holy men with a heavenly ability to sing herself to sleep at night, often using selections from Motorhead’s “Ace of Spades” album. Shipped off to the hostile port city of Duluth, Minnesota (the Darfur of the Midwest) at the age of four, young Bieber took up a passion for percussion and guitar, soon assembling a proficient one-woman band, with her adoptive Native American parents marveling at the child’s musical aptitude, tolerance for heavy leather straps, and ability to manipulate her vestigial tail to clutch a tambourine. Bieber was hailed a miracle musician at the innocent age of 14, only lacking enviable national exposure required to take this feathery-banged baby girl to the bright lights of the music industry.

Enter the copyright-chewing battleground of YouTube. Using the popular video site and meme temple to post clips of her controversial performances at local fairs, book burnings, and gay marriage rallies, Bieber was thunderstruck to find that literally hundreds of people had examined her amateur gigs, with more astute viewers hailing the performer as the next Eden Wood. Enter Usher’s personal assistant’s assistant’s gardener’s mailman’s roofer, who spotted a video for Bieber’s song “My Wi-Fi is No Lie” while searching for softcore porn clips featuring Kay Parker. In a moment of blinding haste, the decision was made to sign the teen to a multi-thousand-dollar record contract, assuring Bieber that she would become a national sensation strictly on her own terms, as long as she was backed by 75 dubious handlers who stood to profit wildly from her success. And the rest, as they say, is history. Or maybe just 2009-10. “Never Say Never” is the grand culmination of Bieber’s musical ambition and tireless dedication to Islam, with director Adam Green (“Hatchet II,” “Frozen”) mixing performance footage from the star’s legendary gig at Tulsa’s Criterion Collection Arena with backstage antics and intimate home movies. The clips display Bieber at the earliest stages of her brilliance, showing how she entertained friends and family with homemade instruments, including a bagpipe made from paper towel rolls and an unused colostomy bag. Neat. The personal snapshots are amazing, highlighting not only a raw musical talent, but also Bieber’s natural charisma and killer Paula Poundstone impression. “Wait Wait…Don’t Tell Me!” is now officially ruined for me.

It’s a straightforward picture of idol worship, yet “Never Say Never” contains more than its share of electric, inspiring moments. Belting out hits such as “Baby,” “U Smile,“ and “Don’t Call Me No (Holocaust Denier),” the superstar works the stage with a confident bounce (thank you Sketchers Shape-Ups!) and knowing smirk, owning the spotlight with her golden voice and Lucinda Dickey-inspired dance moves. Move over Miley, eat balls Demi, there’s a new girl on the scene ready to wet pants everywhere. She can fill arenas and crash search engines, but she doesn’t even have her driver’s license yet! Gulp.

Watching the fans work themselves into an epic lesbonic fit of brace-face ecstasy is wholly amusing to watch, as is a cameo by Bieber’s best girlfriend, Jaden Smith (daughter of “Robocop” star Kurtwood Smith and Jenna von Oy). The twosome duet on the Ibiza dance sensation “Egyptian Looters,” bringing down the house with their lightning rhymes and effortless vaudeville-like banter, only interrupted by a small stoppage that finds a clearly unnerved Bieber abruptly sprinting off the stage in a storm of streaming tears. The press notes inform me that this was an unplanned “menstrual moment,” ultimately kept in the film to maintain unyielding realism. Thank you, Adam Green, for having the courage to show Bieber at her most vulnerable and, frankly, relatable. When it comes to unexpected female troubles, we’ve all been there, let me tell you. 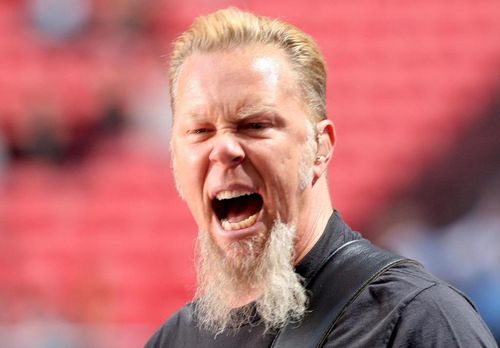 “Never Say Never” climaxes with a remarkable number that finds Cirque du Soleil performers, James Hetfield, and Leonard Cohen performing a tribute to 9/11 in dazzling “TRON: Legacy” illuminated suits, set to a cover of Queen’s “Fat Bottomed Girls” performed in Pig Latin. I’m not exactly sure what that was all about, but I know it was brilliant. I’m sure of it. In fact, everything about “Never Say Never” is pure genius, from the essential 3D surcharge (you’ll end up thanking the studio) to the complimentary hot towels passed around the theater after the film’s conclusion, allowing viewers to wipe down their own seat as a courtesy to the next rush of moviegoers.

The theme of “Never Say Never” is the pursuit of dreams, and how talented folk shouldn’t give up on their gifts, despite haters and hardship. Justin Bieber never gave up on her dream, proving that with talent, drive, and 75 dubious handlers who stand to profit wildly from success, anyone can be a star. You just have to follow your heart. Or something like that. 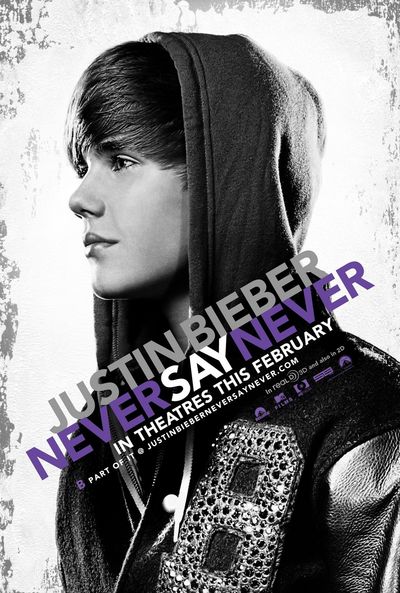 What the hell kind of review is this?

Holy shit this is funny stuff. I wish the film was really like this.

I honestly can't tell if the "Britany" comment is someone getting in on the goof or not. I've read it three times and I can't tell. If it is, and reviews got posters and blurbs like the actual films, then I demand you make it the tagline for this review.

gawdam u suck ass. justin is more man then youll eva B jerk.

this is Y everyone hates critics. yall suck ass.

i bet u justin is laughing at this review while laying on a pile of $$$.

Moron. You must be so jealous of Beiber's good looks and money. He's twice the man you are. HES NO GIRL, ASS.

Cringingly mean, and I'd prefer a real review, but still not untrue. And all of these immature comments prove it. Bieber is not a man, he's a boy whose supposedly great singing voice will crack with puberty and who was manufactured into fame because he is young, that's a marketable novelty act and his name rhymes with "fever". He's now famous because he's famous. To put out a movie about someone who fell ass-backwards into success at 14 with the message that if you work hard you can eventually achieve your dreams is an insult to people who actually have worked hard their entire lives to achieve success. It doesn't matter how rich he is.

i bet justin could kick ur ass hater

Justin Bieber fans are what is wrong with the world. As you can tell, none of them have any sense of what it means to use correct spelling and grammar. But people like "Brittany" are certainly reputable sources of wisdom, so I suppose I shouldn't be one to judge.