Film Review - Just Go with It 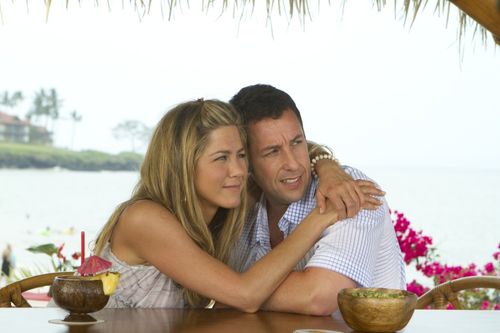 One could look at “Just Go with It” as a semi-remake of the 1969 comedy “The Cactus Flower” (itself adapted from an Abe Burrows play) or as a chance for Adam Sandler to take a paid Hawaiian vacation for a few months, mingling with pals and flirting with his gorgeous co-stars. It’s a relief to report that some of the old Sandler magic is back for this farcical romantic comedy, but his aim remains crooked, leaving the film eager to please but not always consumed with providing first-rate goofballery.

Plastic surgeon Danny (Adam Sandler) has a long history of lying to women, using a wedding ring to seduce sensitive ladies, much to the disgust of his single-mom office manager, Katherine (Jennifer Aniston). When his ring ploy ropes in bombshell Palmer (Brooklyn Decker), Danny is horrified when he’s called out on his deception by a woman he’s madly in lust with. Looking to cover for his transgression, Danny begins telling larger lies to enchant Palmer, using Katherine, her children (who have their own demands), and buddy Eddie (Nick Swardson) to help sell the mounting fibs. Bribing the gang with a trip to Hawaii, the vacation takes an unexpected turn for Danny when he senses a connection to Katherine he’s never quite considered before. 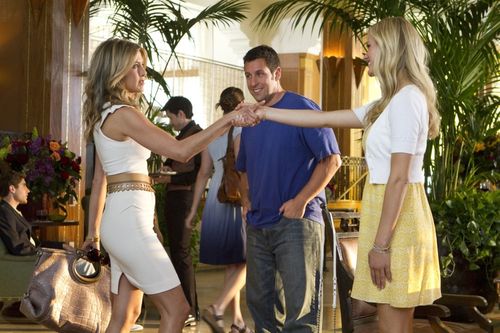 After last summer’s ruinous “Grown Ups,” I figured it was over for Adam Sandler’s spark. A father, filthy rich, and loaded with comedian friends, Sandler doesn’t have the hunger he once enjoyed, instead relying on formulaic, painfully lazy comedies to appease his fanbase. “Just Go with It” isn’t a return to slouchy form, but brings back Sandler’s once thrilling penchant for oddity, having great fun with the absurdity of Danny’s plastic surgery interactions -- Rachel Dratch pops up as a woman with a wild eye brow, while Kevin Nealon appears as a patient addicted to extreme Botox (resembling a “Dick Tracy” villain). It’s these little scraps of absurdity that have always made Sandler romps engaging, establishing standard plots of love and redemption, only to smear the lines of taste with ridiculous asides. “Just Go with It” almost revives that divinely doofy tenor.

The slack Sandler dominates much of the funny bone here, with a sleepy parade of one-liners and flaccid improvisations spoiling the jovial spirit, along with an overestimation of charm from Swardson, who stridently hams it up when Eddie is asked to embody a broad Austrian caricature to balance out the deception on the Hawaiian getaway. He’s awful and indicative of Dennis Dugan’s permissive direction. This being his sixth Sandler film (he’s also helming the next one, “Jack and Jill”), I understand Dugan’s role as the company man, hired solely to keep the camera in focus. However, there’s character business and punchlines that are clearly dead weight, with the entire film in need of extensive pruning. Dugan isn’t an inspired, concerned filmmaker, afraid to challenge the star and his occasionally lame ideas for comedy.

While they don’t always have the best funny business to juggle, Sandler and Aniston make for an appealing pair, at least when the tiresome riffing challenges die down. The actress keeps up just fine with her co-star, sustaining Katherine’s mommy charms and convincingly exasperated reaction to the lies. Aniston and Sandler enjoy engaging chemistry, which comes in handy for the film’s big move to earnestness for the final act. Also terrific fun is Nicole Kidman, here playing Katherine’s old college rival who happens to be vacationing with her dippy husband (Dave Matthews) on the same island. Skilled at comic frustration and exaggerated arrogance, Kidman lands most of the picture’s larger laughs, making her scenes the highlights of the film. 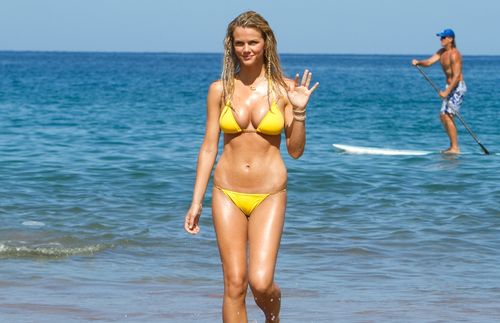 As for Decker, well, the swimsuit model wasn’t hired for her extensive Shakespearean training. She’s not much of an actress, but she’s a fine fixation for the required ogling, a role that Aniston also comes to enjoy as the slo-mo bikini shots are ordered up by Dugan.

Tearing around a tropical playground, landing the occasional laugh via bizarre behavior, and “Just Go with It” provides a breezy sense of familiar Sandler escapism. It’s entertaining enough, but there’s little to recommend beyond Kidman’s inspired manic behavior and Aniston’s likability. Still, after “Grown Ups,” it’s nice to enjoy anything about an Adam Sandler film again. 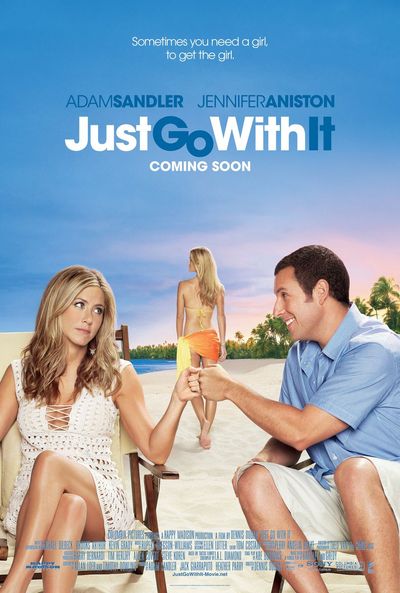