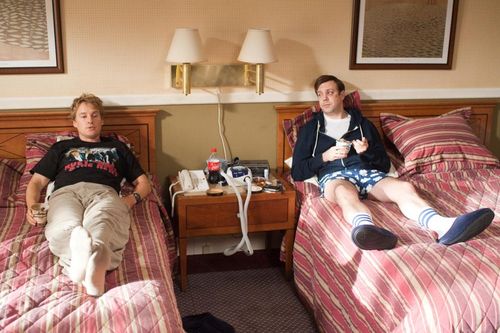 I used to believe the 1998 smash, “There’s Something About Mary,” was the best thing that could’ve happened to the filmmaking duo, Peter and Bobby Farrelly. I now realize I was wrong. The boys have been chasing that success for over a decade, deploying the once enchantingly comfy Farrelly Formula time and again, looking for that elusive box office champion that could restore luster to their tarnished brand name. “Hall Pass” is quite possibly their least organic offering to date, coldly calculating shock value and emotional connection to piece together yet another feature film that’ll make the audience shift from uncomfortable laughter to tender appreciation.

As two married schlubs with sex constantly on the brain, Rick (Owen Wilson) and Fred (Jason Sudeikis) are faced with fading unions, losing wives Maggie (Jenna Fischer) and Grace (Christina Applegate) to the demands of motherhood and age. When their childish antics finally step over the line, the ladies decide to give the guys a “hall pass,” allowing them one week to act like ravenous single men without fear of judgment or reprisal. Confronted with their wildest dream come true, Rick and Fred embark on a weeklong series of misadventures, desperate to find willing women, but mostly encouraging trouble, making them reconsider what’s truly important in their lives. 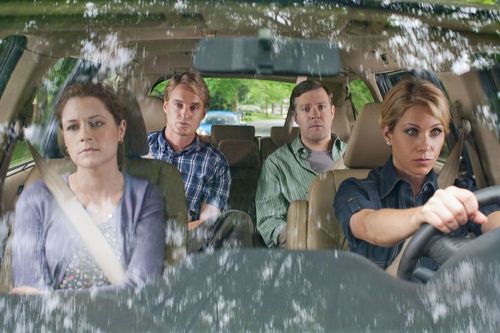 On paper, the merging of the Farrellys and a boisterous sex comedy likely registered as a can’t-miss proposition. After all, the duo has strutted down this road before, leaving them highly skilled in the art of the guffaw with an emotional chaser. Unfortunately, “Hall Pass” is a robotic effort, guided by the brothers in an insincere manner that suggests career panic over true comedic bravery. It’s a gross-out enterprise that’s largely miscast, overly schticky, and morally disoriented, assuming it’s dishing up universal truths on the routine of marriage when it actually feels like a tepid basic cable sitcom, down to the hideously bright cinematography from Matthew Leonetti.

The screenplay offers the Farrellys a playground of opportunity, supplying a plot that follows two idiots as they descend into the wasteland of the single scene, populated with untouchable young things, feisty cougars, and fellow geezers looking to score easy sex. Expecting something charmingly deranged from the directors, “Hall Pass” instead plays it all with crushing familiarity, capturing Rick and Fred as they devour pot brownies, strike out with rancid pick-up lines, and come face to face with male nudity. I wasn’t expecting a semi-sequel to “The King’s Speech,” but surely the Farrellys could be more imaginative than having one of Fred’s conquests spray diarrhea all over his bathroom or include a shot in which a close friend enjoys a bowel movement on a sand trap. And don’t even ask about the oral sex term “fake chow,” which seems pulled from a particularly lame Google search adventure. 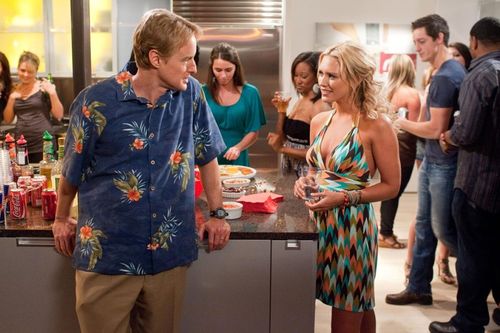 “Hall Pass” is uninspired, but it’s not without laughs. In fact, when the picture settles down to survey the leads navigating the single scene as old men, the Farrellys land a few silly punches, with Wilson and Sudeikis effectively registering comic frustration as married men incapable of growing up. The infantile behavior works in small fragments, but it’s often pushed aside for the shock value bits, many of which feel old hat to a filmmaking team that once drizzled semen on Ben Stiller’s ear. “Hall Pass” pushes too hard to stun, making its excesses irksome, smothering the clear potential of the premise.

In keeping with the Farrelly Formula, the screenplay eventually demands the audience feel for these characters, softening Rick and Fred while giving their spouses their own hall pass subplot, as the ladies face temptation with minor league baseball professionals. The directors adore their warmth, but there’s no place for it here, creating blunt edges as “Hall Pass” jerks from fecal jokes to refreshed declarations of love. The effort is worthless, futilely attempting to nurture a conscience from the wreckage of a dirty movie, perhaps proving the Farrelly Brother moviemaking template is now officially beyond repair. 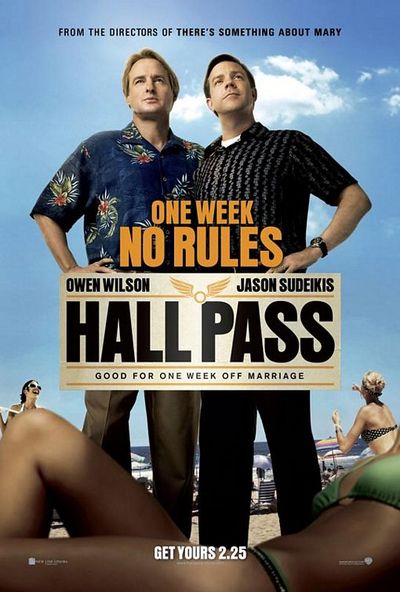