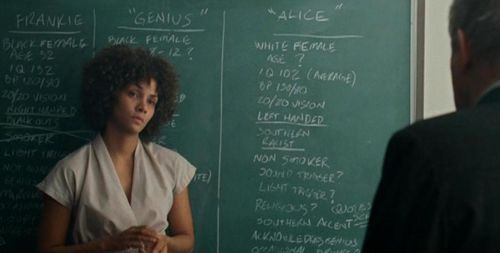 “Frankie & Alice” is a turbulent psychological examination that urges viewers to feel bad for the fractured protagonist and her myriad of personalities. I spent much of the movie feeling bad for the film’s potential audience, forced to endure this shamelessly Oscar-baiting motion picture, which proudly spotlights a strident, exaggerated lead performance from Halle Berry. It’s a feature so eager for statues it practically provides a pen and a reading light to help with any potential award ballot situation that might arise after watching it.

A scruffy stripper doing her best to survive in 1973, Frankie (Halle Berry) has recently become aware of her erratic behavior, which is beginning to destroy her life. After a particularly violent outburst, Frankie is committed to a mental hospital, placed into the care of the aloof Dr. Oz (Stellan Skarsgard). As the two begin their treatment, Dr. Oz comes to identify multiple personalities within his patient, with a white racist woman and a frightened little girl clamoring for attention at all the wrong moments. Hoping to help Frankie control her inner turmoil, Dr. Oz looks to challenge her trauma, taking the shattered woman back to her teen years, where tragedy forever splintered her mind. 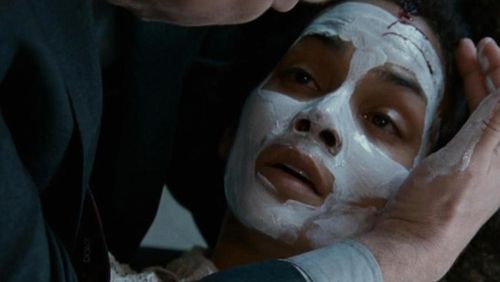 There’s only one reason why “Frankie & Alice” even exists: to deify Halle Berry. It’s not a particularly original story, investigating multiple personality disorder in a highly melodramatic fashion that robs the film of cinematic courage, preferring the gloss of hysteria and thespian showmanship to a more sophisticated peek into a frightening loss of mental control. Frankie is treated as a caricature, a big-haired, flailing open wound who needs a special touch to tame, massaging the film into a hackneyed situation of medical analysis, as Dr. Oz clears his own empty life to deduce his patient’s obstruction.

In stronger directorial hands, the material (credited to six writers) might’ve sniffed out a more absorbing, soulfully persuasive flow of realism and aggravation. Instead, we get “White Noise” helmer Geoffrey Sax, who provides a pedestrian filmmaking effort, refusing to step in Berry’s way as she abuses her multiple characters. “Frankie & Alice” has a certain visual draw, as Sax endeavors to provide hallucinatory transitions between the personalities, but the majority of the feature sits patently, waiting for the star to embark on her marathon of madness. The picture’s flat permissive approach denies the material of the heated sense of tragedy it searches for, killing any sort of sympathy for Frankie. 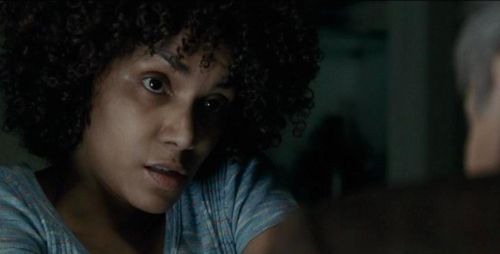 Watching Halle Berry tackle the various stages of her character should be a transformative experience. Sadly, most of it registers as unintentional comedy, with Berry providing the camera with every last tic and tremble she’s got in her thespian arsenal. It’s an unsatisfactory performance with a role well above Berry’s skill level, requiring her to liberate three individual personalities while accurately depicting the tumultuous interior of a woman who’s buried her past deep within. Instead of intricacy, Berry offers wildly affected behaviors and baby voices, calling attention not to the suffering at hand, but her own effort of showboating. Playing broadly with props and costumes, Berry becomes a cartoon, not a heartbreaking case study. The performance is a failure. Unfortunately, so is the movie. 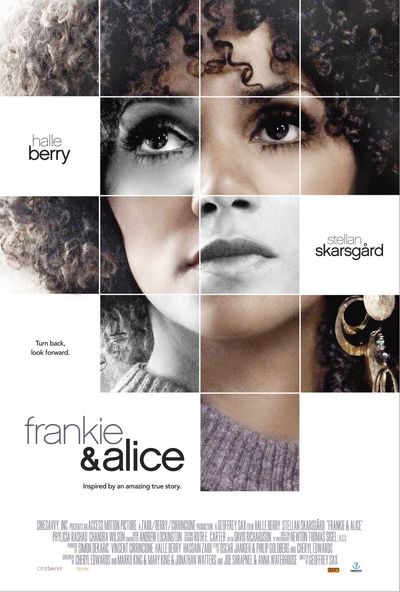 Really? I think she got a Golden Globes nom for this (or maybe Critics Choice? I forget).