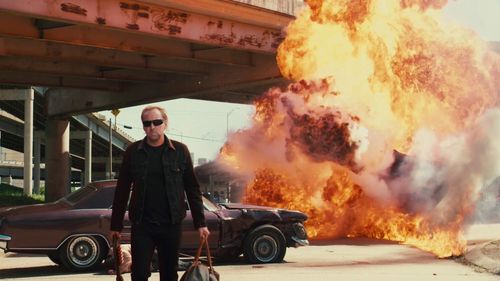 Movies that pursue a campy tone always walk a thin line of execution. Play the absurdity just right, and there’s a mess of good times to be had. Play silliness too aggressively, and the insincerity burns, making the jesting intolerable. “Drive Angry” belly flops into the latter category, pitching its winky tone to the rafters, making certain everyone in the audience is aware that the filmmaker is in on the joke. For a picture that aims to please, “Drive Angry” is far more proficient at summoning aggravation.

Having escaped from Hell to retrieve his infant granddaughter, Milton (Nicolas Cage) is on the trail of satanic cult leader Jonah King (Billy Burke), who’s kidnapped the baby in preparation for a critical sacrificial event. Along the way, Milton meets up with lost soul Piper (Amber Heard), a feisty young woman in jean shorts with nothing to lose. Together, the duo race across the American southlands in pursuit of Jonah, while The Accountant (William Fichtner), an agent of Satan, looks to return Milton to his rightful place south of Heaven. 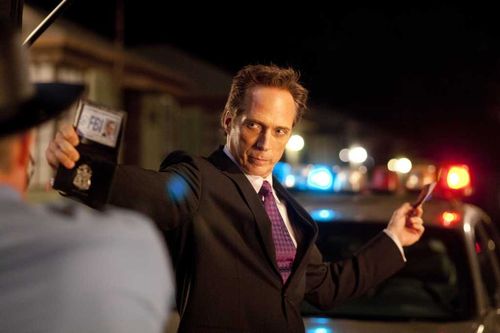 “Drive Angry” is a failure on several levels, cringingly guided by director Patrick Lussier. As a comedy, the picture is an impossibly broad creation that makes a cartoon out of the southern-fried battle between Jonah and Milton, forgoing boldness to mold a violent farce (along the lines of the wretched “Crank” and “Shoot ‘Em Up”), where bloodshed is turned into fingerpaint for Lussier to smear across his frame. The actors are in on the joke, wildly overplaying their roles to a point of confusion, with Fichtner in a particularly ravenous mood, not content to merely chew scenery, but tear it down, chop it up, and snort away. The same goes for Burke, who resembles a cross between Billy Bob Thornton and a popular South Beach hairstylist. And this pointy-fingernailed, blood-licking fellow, my dear readers, is supposed to be the villain.

Lussier attempts to go hog wild with the picture, hitting ridiculous highs with Milton as he mows down his enemies, at one point defending his life while mid-coitus with a randy barmaid (the women of the film are inexplicably attracted to the hostile character). There’s car porn, naked ladies, bad wigs, numerous goons with guns, and enough explosions to officially declare Louisiana a war zone, but there’s no B-movie joy to the film, no delicious appreciation for the grindhouse spirit Lussier is straining to express. It’s just a mess of crummy ideas slapped together into a semi-coherent feature film, with Cage patiently waiting out the picture before he’s on to the next job. It’s rare to find an actor who’s actively getting worse as the years roll by. However, Cage is going full Brando and there’s nobody to stop him. 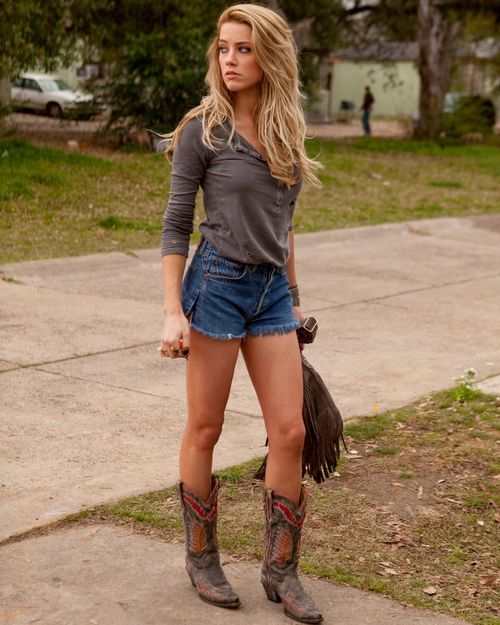 Action-wise, “Drive Angry” employs major CGI to goose the excitement, eschewing practical invention to fiddle with computers, resulting in mediocre special effects and shoddy greenscreen work. Here’s a feature that looks to play down and dirty, yet remains content to point and click its moments of chaos, creating a plastic artificiality that cancels out the coarse hell-raising attitude of the film. There’s a 3D aspect as well, which proves to be quite ineffective as Lussier fails to amplify the visuals, only picking a few cheap moments to explore the extra dimension. The 3D is simply a gimmick to sell tickets, much like Lussier’s last picture, “My Bloody Valentine.”

“Drive Angry” enjoys detonating everything in its path, pandering to the geek crowds (co-star Tom Atkins is introduced wearing a T-shirt that lists popular movie spoilers), and observing actors perform without any discernible direction. The “it’s so bad it’s good” argument can only account for a tiny portion of the film. After that, it’s all just genuinely bad. 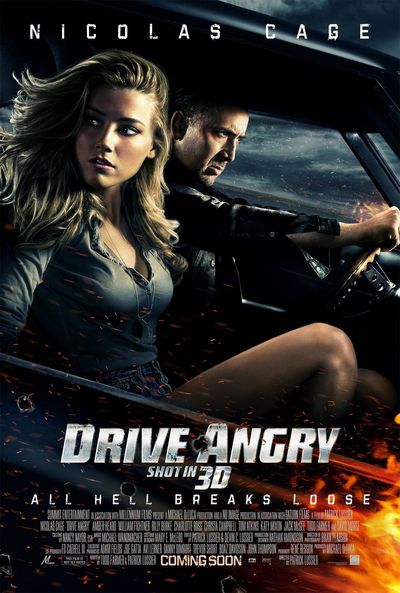