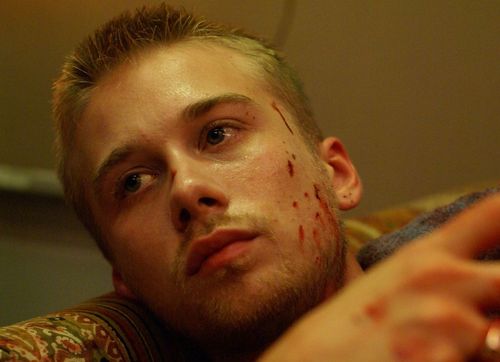 “Brotherhood” is more of a slick directorial exercise than a substantial feature film. Packed with shaky-cam tension, screaming performances, and near-comical turns of plot, the picture doesn’t make much of an impression past a few visceral flashes of conflict, with the majority of the film a frustrating sit that seems to drag on far longer than its 70-minute-long running time.

As part of their fraternity initiation, Adam (Trevor Morgan) and Kevin (Lou Taylor Pucci) are forced to rob convenience stores at gunpoint, with senior brother Frank (Jon Foster) orchestrating an elaborate prank to test the dedication of the pledges. When the hoax goes wrong, Kevin is left with a bullet in his shoulder, dragged back to the frat house as Frank frantically figures out how to cover his own behind before any attempts at medical assistance are made. As the night wears on, matters deteriorate as Adam fights to save his fellow pledge, the store clerk (Arlen Escarpeta) who shot Kevin is kidnapped and held in the frat basement, and true outside medical expertise is sidelined by drunken buffoonery from a nearby sorority.

It’s almost brave of co-writer/director Will Canon to stage a film where there’s nobody to root for. A feature populated with frat boy stereotypes and morons, “Brotherhood” gives off the impression it wants the viewer to feel for Adam’s frustration and convenient sense of decency, but there’s no proof in the filmmaking, which offers the screen a series of reprehensible characters committing reprehensible acts while the camera operator covers the action with a wearisome visual quake.

I’m all for disgusting individuals doing dirty business, yet “Brotherhood” doesn’t have a tingly originality about it that supports a refreshing visit to the dark side. The frat guys are cartoon creations who thrive on abuse, living to humiliate women and guzzle gallons of booze (a few are racist as well). The antics are straight out of “Revenge of the Nerds,” confusing the seemingly serious tone of the piece, eschewing darkly comic touches to tinker broadly with escalating anxiety, spurred on by a series of accidents that stymie the brothers and their efforts to wiggle free of the situation without incurring blame. Once Kevin is shot, it’s a bleak night of concern for all involved, only the pledge bleeding profusely on the IKEA couch is the last thing on everyone’s mind.

It’s a shame there’s no entry point to “Brotherhood,” since it’s clear Canon is a gifted architect of doom. The shocks are successful, only ruined by overly excited performances, but the timing is right, with each reveal piling comfortably on the previous one, creating a snowballing nightmare for the bros. Again, the camerawork is an anchor, reducing tension to irritatingly spastic movements. Canon didn’t need the hackneyed artifice to conjure tension, with the majority of effective scenes in the film regulated to moments of internalized desperation. I’d rather see these characters feel the burn of their worst nightmare than have it cheaply manufactured by the camera.

“Brotherhood” is short, but it somehow manages to run out of steam in the end -- perhaps the material might’ve been better served as a raging short film than a feature. It’s an unsatisfying picture, but there’s promise here from Canon, who could develop into an appealing filmmaker with a more rigorous narrative challenge. 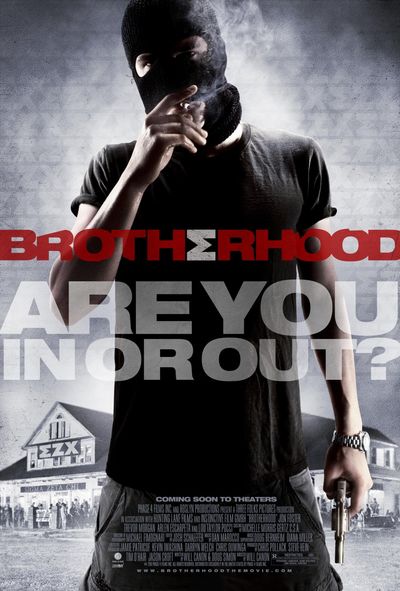