Star Michael Matthias wants to be Vin Diesel in the worst way. With his pumped-up exterior, shaved head, and unconvincing way with the English language, Matthias is a J.V. screen brute looking for his chance at big time stardom. “The Bleeding” (shot in 2008) won’t turn the hulk into a major action star. In fact, it might kill his leading man career altogether. A slapdash mess of genres with zero storytelling capability, “The Bleeding” looks to coast on red-hot vampire trends. Instead, the film bites, and not in a satisfyingly monstrous manner.

Distraught after losing his brother in Afghanistan, Shaun Black (Michael Matthias) is ready to wage war on the vampire nation over the slaughter of his family. Learning of his lineage as a “slayer,” Black seeks out advice from Father Roy (Michael Madsen), an eccentric priest who also craves an opportunity to end the bloodsucker plague. Armed with blessed weapons and sheer balls, Black searches for the whereabouts of Cain (Vinnie Jones), a vampire leader barricaded inside an abandoned factory that’s been converted into an exclusive nightclub, tempting young women with promises of dance floor ecstasy.

“The Bleeding” was directed by Charlie Picerni and, shockingly, this isn’t his first feature film. In fact, Picerni is a longtime stuntman with an extensive list of acting and directing credits, leaving the general disarray of this picture inexplicable. Picerni exhibits no control over his own film, veering wildly from scene to scene, with waves of nutty exposition crammed into the picture via Black’s chunky voiceover. Attempting to reignite the age-old battle between the bold and the bat, the filmmaker instead creates a 72-minute-long (there’s 10 minutes of opening and closing credits to pad out the movie) question mark, teeming with familiar faces, muscle car lust, explosions, and exposed fangs. “The Bleeding” is a debacle, and not one that provides a schlocky rush of amusement.

Matthias (who co-produces) is the star of the show here, galloping around like a silverback gorilla, desperate to come across butch while spitting out inane dialogue from screenwriter Lance Lane. Built and broody, Matthias has the carriage for such a Z-grade distraction, but hardly the clenched-fist skill, coming off unprepared for the challenges of monosyllabic screen performance. To counterbalance the void, Picerni calls in a few favors, bringing in Madsen and Armand Assante to elevate the acting a notch, while cameos from rapper DMX and “reality” television star Kat Von D (as Cain’s vamp bride) offer the film needed peculiarity. Anything to distract from the convoluted plot or characters labeled “Johnny the Perv” is fine by me.

UFC fixture Rachelle Leah also joins the party, only her role is restricted to general hesitation and numerous reactions of bewilderment. It’s the one performance I could fully relate to.

The anamorphic widescreen (2.35:1 aspect ratio) presentation captures the sleazy, low-rent appearance of the film accurately. With shifting color schemes and lighting blasts, the image keeps to simplistic visual terms without overt contrast issues, communicating the textures of the over-saturated cinematography comfortably. Black levels are on the muddy side, making low-light encounters a bit difficult to decode.

The 5.1 Dolby Digital sound mix is a harsh listening experience, with dialogue and scoring often competing for attention, leaving a few of the lines washed away by the noise. Soundtrack cuts are evocative for crowd scenes, containing a hallow feel for a big party room. Action beats find directional activity, but often feel overly aggressive without the welcome separation that creates true energy.

“Cast Interviews” (4:49) speak to the actors on-set as they scramble to find interesting things to share about the filmmaking experience. Seeing the production in motion is intriguing, but the featurette is primarily a brief blast of promotion, with Assante referring to the film as “a futuristic western.” Yeesh.

“Make-up & Effects” (4:56) isolates the practical effect effort, with glimpses of blood, body parts, and ghoulish creatures provided. The best moment is reserved for Kat Von D, who freaks out at the thought of being fitted for squibs.

“Stunts” (5:00) explores how a few of the more intense crashes and smashes were achieved, talking to cast and crew while BTS footage highlights the mayhem in motion.

The last act of the film is a showdown scenario that unleashes a torrent of violence, as Black looks to take out Cain and his gang during an extended car chase. There are bullets, explosions, and glowing swords, yet, oddly, nothing interesting occurs onscreen. “The Bleeding” is obviously derivative and artistically bankrupt, but for a film that offers a television tattoo artist in a supporting role, pairs DMX and Matthias in scenes of crucial exposition (keep the subtitle button within reach), and dresses king vampire Cain in full 1970’s pimp wear? Surely this nonsense could’ve been more fun to watch. 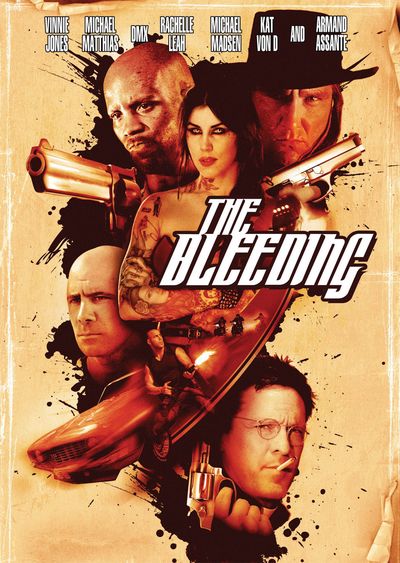 It is the worst movie ever made. Director Picerni sucks ass!