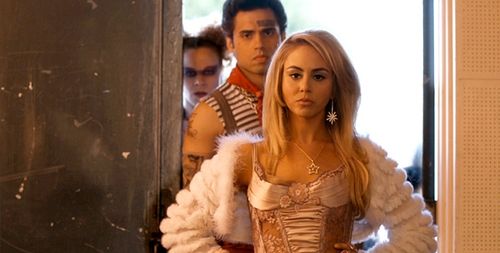 To answer the obvious question right away: No, “Repo Chick” is not a sequel to the 1984 cult hit “Repo Man,” despite the reunion of writer/director Alex Cox to the realm of “Repo” titles. Instead of a return to past glory, Cox attempts something wild with his small budget and newfound taste for greenscreen, erecting a subversive satire/romp that stretches roughly 15 minutes of marvelous cinematic ideas over 90 punishing minutes of screentime. I’ve never missed Emilio Estevez more.

In the near future, banks have seized control of the land, leaving repossession the only job left on the planet. For spoiled socialite Pixxi (Jaclyn Jonet), a repo gig is her only opportunity to return to the good graces of her family, who’ve abruptly disinherited her, leaving the bubbly blonde in the care of company man Arizona Gray (Miguel Sandoval). Showing a gift for the art of repo, Pixxi is soon fixated on a considerable reward offered for the retrieval of a lost train, taking to the streets of L.A. on the hunt for clues. Instead of acquiring easy cash, Pixxi comes into contact with a terrorist group looking to rid the world of golf courses, armed with an ecological message and a nest of Russian bombs. 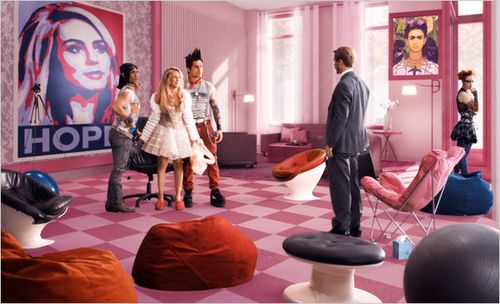 To its credit, “Repo Chick” has a highly unusual visual scheme. Shot entirely on greenscreen stages, Cox pastes the eager actors into a shiny world of miniatures, toys, and animation, creating a specialized unreality to backdrop the absurd screenplay. The concept is stimulating, allowing the filmmaker to mount the strenuous particulars of the story with minimal toil, reducing the need for an epic budget by turning everything into a cartoon of sorts, facilitating the broader strokes of imagination. While the execution is bit dodgy from shot to shot, the visual ambition keeps “Repo Chick” alive for the opening act. Once the novelty wears off, the film immediately wears thin.

Cooking up a world of financial ruin, government corruption, and celebutante worship, Cox has plenty on his mind with “Repo Chick.” Trouble is, it all vomits out at once, creating a tedious film of lukewarm satire and garish colors, spun with palpable confusion from the cast (which also includes Rosanna Arquette and “Sid and Nancy” star Chloe Webb, who hasn’t been in a movie since 1998). Cox goes after the state of the union armed with a marshmallow gun, struggling to stay topical while dreaming up ways to exploit the Barbie greenscreen aesthetic he’s created. It’s an explosion of Kubrickian madness, but there’s no sense of rhythm to the farce, which lunges from scene to scene without generating any laughs or knowing nods. 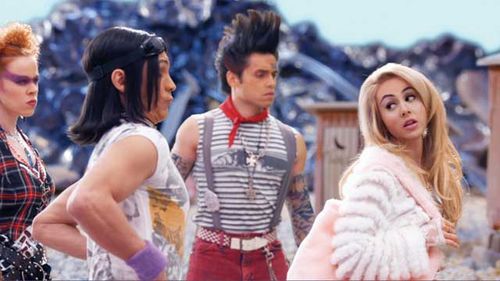 “Repo Chick” aims to reach a chaotic peak of destiny, where our pop tart heroine strives to save the day from a myriad of “villains,” using what passes for smarts and some help from her pals. By this point in the picture, the heroic jolt has rubbed off. I wish I could report how thrilling and refreshing the feature is, especially with such distinctive visual ambition. However, Cox is wearing his crash helmet backwards, leaving “Repo Chick” an aimless, unsatisfying mess that reaches for a cheeky mood of anarchy, only to achieve complete disinterest by the end credits. 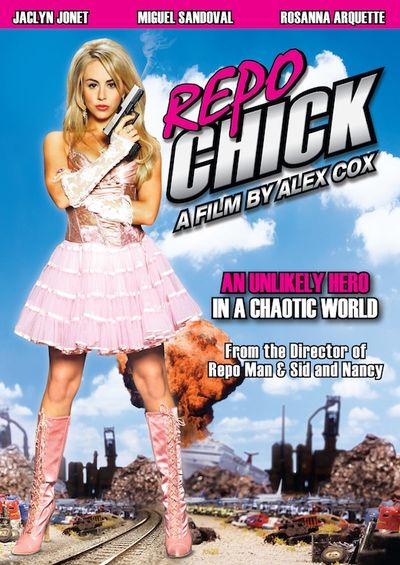