It’s unsettling to think the man responsible for “Meatballs,” “Stripes,” “Ghostbusters,” and “Kindergarten Cop” has spent the last decade churning out misfires such as “Evolution” and “My Super Ex-Girlfriend.” Ivan Reitman’s comedy mojo is evidently gone. Further confirmation of career death comes in the form of “No Strings Attached,” a sloppy, insipid chick/dick flick intended to blur the line between raunchy and romance. At 64 years of age, I’m not sure what Reitman’s doing fixating on the genital action of twentysomethings, but if there was ever a reason to root against the upcoming (maybe) “Ghostbusters 3,” this movie proves the filmmaker is out of creative gas.

Intertwined in each other’s lives over the years, Emma (Natalie Portman) and Adam (Ashton Kutcher) have spent the last decade avoiding a relationship, despite obvious physical attraction. Now with both in L.A., the time has come for these two to make with the sex, and while thrilled with the opportunity, Adam is stunned to learn that’s all Emma wants: a relationship free of commitment and filled with carnal delights. As the twosome proceeds to get down and dirty, Adam quickly moves to break the deal, falling in love with his partner, while Emma, hardened to the ways of the heart, refuses Adam, pushing him away, despite her hidden desire for companionship. 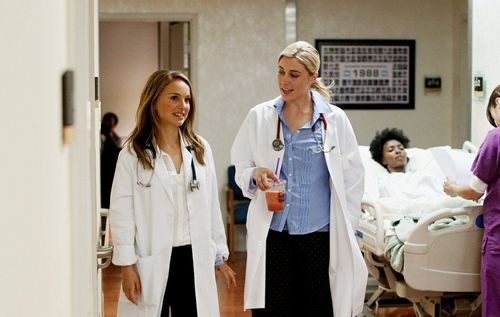 “No Strings Attached” is a shallow, slapdash film that longs to be something meaningful, as any romantic comedy aims to do. Absent here is a gentle quality typically employed to keep viewers in a state of swoon, bringing two attractive actors together to make kissy faces, banter mildly, and then break-up-to-make-up. “No Strings Attached” plays more crudely to make a quick impression, with the screenplay by Elizabeth Meriwether (huffing Nancy Pimental fumes) looking to shock value to sustain the merriment. Instead of googly eyes and crucial emotional development, we get a rain of F-words from actors who can’t handle the salt, an opening reference to digital penetration (right at that first bite of popcorn), and an extended scene of Emma and her gal pals (Greta Gerwig and Mindy Kaling) groaning graphically about their menstrual cycles (Adam captures the moment with a “Period” mix CD).

Meriwether looks to design her own ballsy, fist-bump comedy, removing the gooey center to depict two healthy adults living in the pantsless moment, spending their days texting and sexing, keeping feelings out of the equation. Unfortunately, the script doesn’t push the envelope, following through on the intriguing promise of frigidity, quickly succumbing to hackneyed nonsense that highlights Emma warming up to the idea of love the moment she loses Adam for good. There are no surprises here, just unnecessary abrasion and a protracted Screenwriting 101 structure, executed by Reitman in the most apathetic manner imaginable. The director barely pushes the plot along, instead entrusting the comedic tenor of the film to unfunny people (Portman, Kutcher, Ludacris, Lake Bell, Jake Johnson, and Olivia Thirlby) who whiff improvisations left and right, while somehow coaxing Kevin Kline into a humiliating role as Adam’s former sitcom star dad, firmly stuck in a mid-life crisis that has the tanned man dating his son’s former girlfriend. 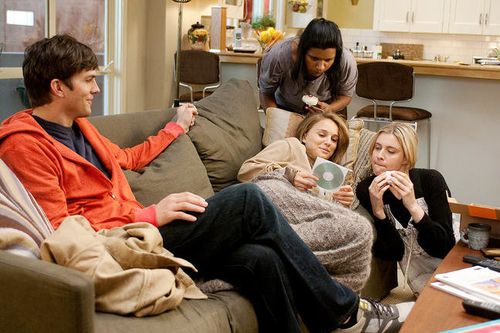 Things grow so dire in the comedy department, Reitman brings out “SNL” star Abby Elliot to do her Drew Barrymore impression for the camera. Why? I have no idea. That irritating lack of concentration defines the viewing experience.

Focus does manage to return to Adam and Emma again, but their love is baffling stuff. The characters have nothing in common besides mutual attraction; Meriwether doesn’t bother to layer in a quaking connection between the pair, keeping the passions bloodless and uneventful until the plot needs them to be soul mates. “No Strings Attached” is a romantic comedy without the romance or comedy, keeping the pairing strictly about surface details and clichéd conflict. All the bawdy behavior, sexual gamesmanship, and underwear modeling can’t disguise the fact that “No Strings Attached” concerns two rather unlikable people in an easily avoidable situation. This is where great direction assumes command. Here, we’re stuck with Ivan Reitman. 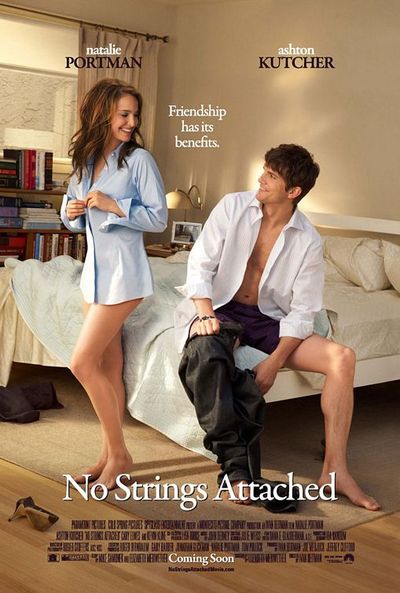 Few films in recent times have been such a disappointment. It works as an second-rate popcorn movie, but there was an opportunity to reach so much further.

Given Ashton Kutcher (it's easy to dismiss him as an actor but watch "The Butterfly Effect" before doing so) and Natalie Portman (do I need to argue that she can act?), there was a chance to make a profound statement about men, women and the relationships they form. Instead the writer and director seem to have opted for the low road of cheap, easy, and often nasty. Such a shame.