The strange, sad trail of Val Kilmer’s once thriving career leads to “The Traveler,” a no-budget Canadian shocker looking to supply some leftover goopy gore for the “Saw” crowds. It’s a completely idiotic, glacial, and poorly acted feature, but one doesn’t rent a Val Kilmer picture these days to watch the supporting cast flail about. One watches for Kilmer and his complete inability to disguise his boredom with acting now that he’s firmly ensconced in the DTV era of his filmography.

All activity has ceased inside a rural police station on Christmas Eve, with state troopers closing access to the town due to highway accidents. Into the quiet building comes Mr. Nobody (Val Kilmer), a beefy, long-haired fellow who’s arrived to confess a crime of murder. The cops don’t know what to make of the shadowy man with no fingerprints, placing him a cell for safekeeping. Of course, Nobody comes to be sizable trouble, mysteriously killing off the team one by one via supernatural invasion, while Detective Black (Dylan Neal) pieces the clues together, realizing the ghoul might be the one responsible for the unsolved murder of his young daughter.

“The Traveler” is caught between creaky budget suspense sequences and shrill gorezone theatrics that slop blood and organs all over the frame. It’s a weird combination of tones put forth by director Michael Oblowitz (“Hammerhead: Shark Frenzy”), who’s trying to make his minuscule finances dance with a few crude jolts to counteract the long slog of exposition that makes up most of the viewing experience.

You see, Mr. Nobody isn’t what he seems. Or perhaps he’s exactly what he seems. “The Traveler” looks to blur comprehension by playing with perception, as our villain may or may not a drifter Black once pulled in for questioning about his daughter’s murder, only to force his underlings into a torture session that left them all emotionally scarred and the bum in a coma. Nobody’s reign of terror plays into a biblical sense of retribution, with the droning killer sitting patiently in his cell whistling Mozart and reciting quotes while slipping into the feeble minds of the cops. If it sounds mildly interesting, I assure you it isn’t, as Oblowitz doesn’t have a cast experienced enough to accurately sell the mental ambush, while his fondness for bloody money shots quickly turns the film into a Troma production.

Most of the film is devoted to relentless bickering, trembling reactions of disbelief, and protracted shots of “suspense” as the officers slowly grow to comprehend Nobody’s sadistic intent. It’s impossible to get behind the sniveling lawmen here, especially when these boobs don’t even bother to handcuff Nobody for the opening 35 minutes of the film. Granted, logic isn’t a concern here, but a man walks into a police station announcing his orchestration of murder and they calmly escort him around the building for 1/3 of the movie? Maybe these cops deserve to die.

The anamorphic widescreen (2.35:1 aspect ratio) presentation deals with an extraordinary amount of low-light scenarios, leaving the film with nearly a monochromatic look. Thankfully, the black levels here are strong, buttressing the rest of the visuals satisfactorily without falling into muddy distractions. Colors are good when offered, with red registering well as the bloodbath kicks in. Skintones are accurate.

The 5.1 Dolby Digital sound mix is active for the most part, exploring the suspense of the film with a pleasing blend of scoring cues and sound effects, detailing the intricate steps of Nobody’s death rampage. Dialogue sounds a little tinny for comfort, without a hearty bottom to fill out the constant yelling matches. It can sound too shrill at times. Atmospherics are kind, with the film’s interest in steady rain skillfully employed in the surrounds.

Kilmer is the star of the show here and his dead-eyed performance succinctly sums up the picture’s general lack of effort. The actor doesn’t have much to do besides sit comfortably in a baggy jacket and recite insipid lines while staring into the camera. He’s coasting, but who could blame him? 15 years ago he was Batman and now he’s in the wilds of Canada surrounded by local actors forced to act menacing for the director of “Hammerhead: Shark Frenzy.” I’d be sad too. 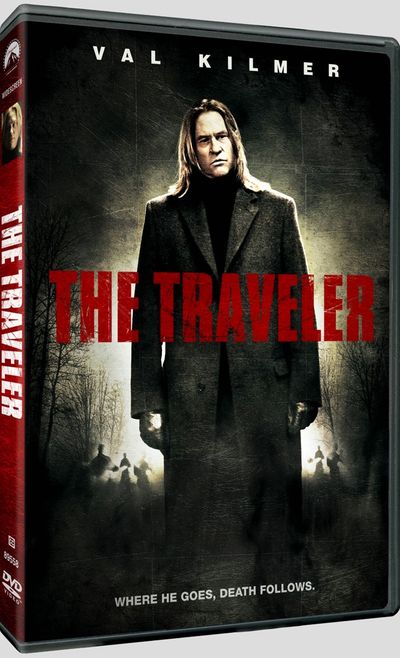