World-famous rapper, relentless huckster, video game brand name, actor of no discernable skill, and now motion picture screenwriter? Yes, Curtis “50 Cent” Jackson tries his hand at cinema mythmaking with the urban crime saga, “Gun.” Regurgitating the “Scarface” formula to such a degree that Brian De Palma should consider hiring some lawyers, Jackson looks to shape a new iconic crook for the masses, rolling moldy streetwise clichés and John Larroquette (of course) up into a limp thriller from the director of “Soul Plane.”

Rich (Curtis “50 Cent” Jackson) is a gun runner looking to graduate to major league arms dealing, working the streets of Detroit with an unusually potent cache of weapons. Angel (Val Kilmer) is a recent parolee and Rich’s former criminal compatriot, looking to rebuild his life to face his family again, returning to his old associate for a lucrative job as an enforcer. With frustrated cops (James Remar and Paul Calderon) on their trail looking to make a spectacular bust, Rich and Angel create a forceful presence in the underworld, leading them to impress their contact (AnnaLynne McCord), who holds the key to a major arms supplier (John Larroquette).

The frigid, snowbound streets of Detroit evocatively backdrop the dopey happenings of Jackson’s script for “Gun,” which is a tired run of brutes, bullets, and beats meant only to wow the most young and impressionable of demographics. Director Jessy Terrero glumly molds what barely passes here for tension, looking to investigate Angel’s red-eyed discomfort as he immediately gains Rich’s trust, keeping the mystery of the character’s loyalty rolling along for the majority of the film. And that’s pretty much it for genuine story in the 78-minute-long feature, which is primarily comprised of Jackson scripting himself hilariously gymnastic sex scenes, mumbly speeches, and cartoon shoot-outs, keeping Rich hard in more ways than one.

Looking to stay topical, Jackson repeatedly reminds the viewer about the tattered state of the economy, with the police force facing budget cutbacks and the gangsters justifying their despicable acts of depravity as “survival.” “Gun” attempts to cover its absurdity with a healthy shot of headline news, but the dialogue is far too stiff (Jackson’s firearm vernacular impresses, but doesn’t bond with the rest of the language) to take seriously, and there’s irritation with a story that seeks to glorify criminal behavior without even trying to introduce a downside. There’s no moral core here, just Jackson scowling, giggling (a weird affect used to create a memorable thug signature), and using his very own music on the soundtrack, including this feminist anthem:

I assume that’s the love theme.

Keeping “Gun” reasonably compelling is the supporting cast, with Remar adding convincing impatience as the downsized cop on Rich’s tail, and Kilmer brings something approaching emotional weight to a character carrying an intense psychological burden. At least they distract from Jackson’s monosyllabic line readings and flash-frozen reactions. That’s all I ask. As for Larroquette, I have no clue why he’s around. Showing up only for a few brief scenes, the Emmy-winning actor is merely here to look menacing and play the token Whitey. At the very least, the Six Degrees of Kevin Bacon game just became a lot more interesting.

The AVC encoded image (2.35:1 aspect ratio) presentation is a mixed bag at best, with the picture looking overly brightened at times. Grim interiors feel unnaturally illuminated, washing out needed color. Shadow detail is comfortable, with costumes and nightlife offering pure blacks, allowing for intended textures. Detail is acceptable for a low-budget movie such as this, with attention handed the chilly environments and dilapidated locations, though facial work is a bit confusing, as much of the cast allowed a grizzled appearance, while McCord has been digitally smoothed out, looking alien compared to the rest of the creased brutes. It’s a lousy, distracting development, especially with such a young actress of rumored attractiveness.

The DTS-HD 5.1 mix is a straightforward arrangement of boomy soundtrack beats and dialogue exchanges, blended suitably to give off the appropriate hip-hop criminal vibe. Exposition is mumbled by a few of the actors, but the track orders the information properly, keeping matters frontal for optimal digestion. Once gunplay enters the picture, the volume kicks up loudly, with directionals imparting a circular feel of action, with a welcome low-end response to compliment the absurd weaponry that enters the picture in the final act.

A Trailer is offered.

“Gun” explodes in the final showdown, pitting cops vs. crooks for the future of Detroit. Or maybe it was for the future of Detroit’s nicest warehouse. Who knows. All Jackson is motivated to do is giggle, hold cartoonishly large weapons, and leave things wide open for a sequel. It’s a simple recipe for DTV mediocrity. Thank heavens Jackson took the time to commit it to paper. 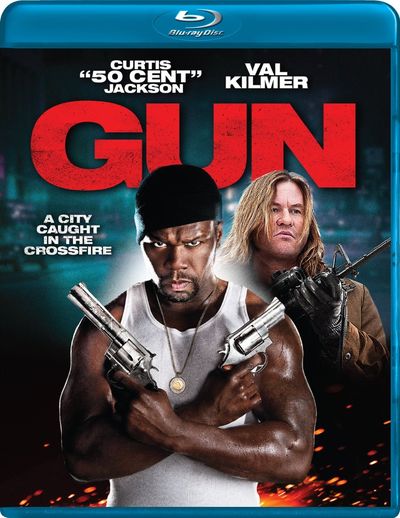 I liked this movie. 3/4 stars. It has a nice gangster feel, with great acting.