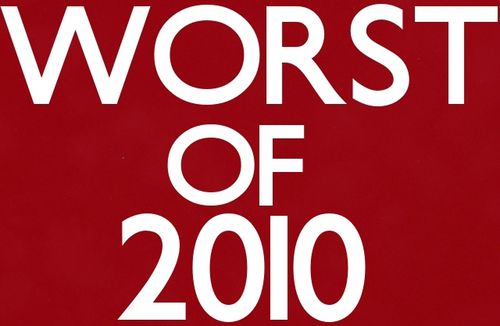 Plastic runaways, 100% medical accuracy, Kristen Bell x2, the strain of marriage, the wrath of Dick Chainy, Lawrence of My Labia, Edward Sullen, Schumacher’s revenge, and Nazi mice. These are the worst films of 2010.

Why Did I Get Married Too? (review)

It’s easy to pick on Tyler Perry and his pedestrian filmmaking efforts, but everything about this rancid sequel rubbed me the wrong way. Fighting off Perry’s cinematic sleeper hold is challenging enough, but “Married Too” boiled his brand of hysteria to a whole new level of toxicity, drilling into the senses with a script sculpted out of shrill arguments, piercing performances from abysmal actors, and a reprehensible disconnect from reality that brought the original 2007 picture a faint flicker of life. The film is like a triggered car alarm with the owner on vacation, hitting a routine of strident, infantile behavior that could be considered a terrorist act in some countries. Or should be. Perry has his fervent defenders, programmed to deflect any legitimate criticism of his filmmaking proficiency and suspicious dramatic intent, but even the faithful seemed fatigued with this stomach-churning drivel, introducing a first for me in 2010: Positive e-mail responses to a negative Tyler Perry review.

When in Rome (review)

The director of “Ghost Rider” went and made a romantic comedy with an irritating cast that includes Dax Shepard and Jon Heder. It doesn’t take a genius to recognize that’s not going to pan out. The revelation here was Kristen Bell, who didn’t offer anything in the way of leading lady charm or comedic confidence, making for an uninspired eye to an appallingly unfunny slapstick hurricane. With zero laughs or even the slightest flash of invention, “Rome” fell once again, this time under the watch of a bush-league filmmaker trying to make a painfully stiff blonde shine as a beacon of swoony silliness.

In case you forgot, Joel Schumacher still makes motion pictures. They don’t always find wide release, but the 71-year-old director manages to keep churning out product. “Twelve” was Schumacher’s attempt to tap back into the youth market that served him well in the 1980s, sketching out the mumbly madness of overprivileged teens as they explore chemical excess and sexual experimentation, and endure parental disinterest. Obnoxiously scripted and wretchedly performed, “Twelve” solidified Schumacher’s obsolescence as a filmmaker, while providing an exceptional reminder that even if the kids aren’t all right, who really cares?

Sex and the City 2 (review)

Diving headfirst into the deep end of absurdity, “Sex and the City 2” managed to turn a franchise already developing cartoon attributes into a full-bore Hanna-Barbera extravaganza, making a mockery of Middle East culture, laughing at economic woes, and ruining the pleasures of heterosexuality for at least two generations to come. A shockingly overlong (146 minutes) and overblown monstrosity, “Sex 2” amplified everything diseased about this insufferable franchise, using the sequel as a sort of victory lap for altering the face of modern feminism. The parade of ridiculous fashions, melodramatic baloney, and New York snobbery is one thing, but this sequel came off downright hateful, filling the intended audience with a profound feeling of ick, not the reassuring kiss of high-heeled escapism. It was haute couture hell.

The Nutcracker in 3D (review)

Tchaikovsky’s perennial holiday ballet has been adapted for film and television on many occasions, but few productions made the specific effort to rework the whimsical material into a bitter Nazi allegory. Thunderously distasteful, “Nutcracker” boldly carried on through a dreary wasteland of animal cruelty, sketchy special effects, arbitrary screenwriting, and unwelcome musical numbers, daring to supply dopey lyrics to a magnificent suite. Of course, a budget 3D conversion (the unofficial theme of the 2010 moviegoing year) only made matters more ghastly, adding the promise of a stinging headache to an otherwise excruciating, flabbergasting moviegoing experience.

An inane, nonsensical horror picture that somehow bribed its way into a theatrical release, “Chain Letter” is perhaps best remembered as the rare film that dared to do away with such luxuries as originality and an ending. Instead, this insipid slasher snoozer went about its business slaughtering teens and squirting blood, consistently reminding the audience of director Deon Taylor’s complete inability to stage basic suspense sequences or even tell a coherent story. Perhaps the picture’s intense idiocy was a blessing, leaving the viewer with something to mock instead of numbly accepting the depressing bad movie reality. Still, an ending might’ve helped.

Kristen Bell makes a second appearance on this list with another outrageously unfunny slapstick comedy from Disney. Again mistaking overkill mannerisms for comedy gold, Bell ran a capable cast (including Jamie Lee Curtis and Sigourney Weaver) into a wall of stupidity, while director Andy Fickman staged hoary comedic encounters even the most desperate CBS sitcom would reject. It was an absurdly lazy, grim picture. Perhaps Bell should stick to dramas.

This one’s straightforward: Jason Friedberg and Aaron Seltzer. The directors of “Date Movie,” “Epic Movie,” “Disaster Movie” and “Meet the Spartans” returned to mock the blockbuster bigness of the “Twilight” franchise. Consistent purveyors of putrid parodies, the boys couldn’t even muster comedy semi-wood with their latest razzing. If one considers how the vast opportunity to kick the omnipresent vampire saga in the rear end is squandered on puerile nonsense, it’s downright obscene. Making fun of “Twilight” should be easy. “Vampires Suck” made it look impossible.

While gifted a shot to document the rough ride of ‘70s girl rockers, The Runaways, the production instead pandered to the demands of Joan Jett and Cherie Currie, turning a fascinating story of a band on the rise into an empty machine of self-promotion for the two participants who stood to profit the most from the film. Skipping feral group interplay to stumble through a field of bio-pic clichés and hackneyed visuals, the picture seemed more consumed with rewriting history than addressing it. Matters were soured further by lead performances from Kristen Stewart and Dakota Fanning, who couldn’t muster the jagged edges and raw sexuality expected of them. Instead, the twosome dragged around like zombies, paying more tribute to useless surface details than the volatile whole. Teenage rebellion and music industry alarm never felt so lifeless and suspiciously incomplete. The cherry bomb detonated in their hands. 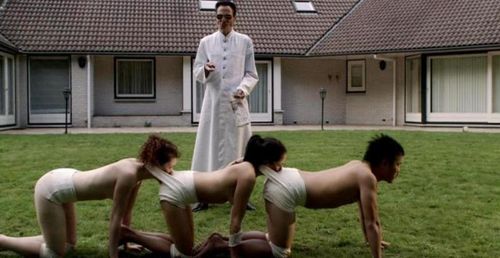 Cult favorite? Sinister horror happenings? Doomsday delight? How about a complete and utter bore. “The Human Centipede” looked to push the envelope in terms of shock value, summoning a tale of flesh-sewing medical terror that almost defies explanation. However, the execution of this cinematic Ambien pill left much to be desired, with large sections of the film devoted to the electrifying art of staring contests and muffled pleas. A macabre premise is left for dead as director Tom Six writhes around his Euro-cooled mood, trusting the mere sight of the titular creation is enough to build an entire feature around. Some genuine moments of surprise would’ve been nice, maybe actual suspense too. Instead, it’s an irritatingly stillborn effort, more effective as a pop culture punchline than an actual motion picture.