“The Fighter” doesn’t flourish as an original offering of filmmaking. It’s an underdog story of sporting glory, seen in hundreds of motion pictures throughout the years; it’s also a tale of brutes dreaming and failing each other in a harsh working class corner of Boston. Again, been there, done that. Where “The Fighter” retrieves inspiration is found deep within its heart, dissecting the lives of “Irish” Micky Ward and his brother Dickie Eklund with an aim for intimacy, more curious about human interaction in the heat of conflict than a routine staging of the comeback blues. It’s an agitated picture that, much like its real-world inspiration, has enormous spirit to overcome its dreary familiarity.

In Lowell, Massachusetts, Dickie Eklund (Christian Bale) is a legend. A former boxer who famously knocked down Sugar Ray Leonard, Dickie is a manic machine who adores two things: his pugilist brother Micky (Mark Wahlberg) and crack, a drug habit that’s reduced him to a wisp of a man. Facing a dire future after his latest fight goes horribly awry, Micky is confronted with the toxicity of his enormous family, including his mother and manager, Alice (Melissa Leo). Looking to make a change for himself, spurred on by the support of girlfriend Charlene (Amy Adams), Micky attempts to break away from his family’s control, an act that sends the boxer to victorious heights, but threatens to shun Dickie and crush his intense world of brotherly adoration. 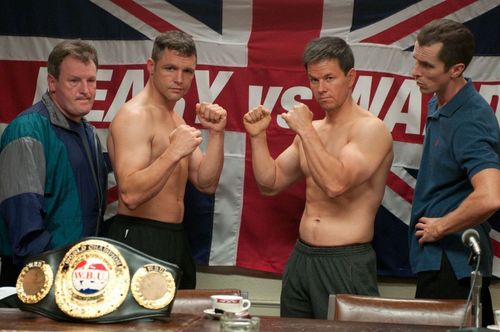 Faced with a script of proven clichés, director David O. Russell (“Three Kings,” “I Heart Huckabees”) pulls “The Fighter” from his gut, grabbing the grit of the city and the pain of the characters with both hands, reworking tired elements into something fresh and unexpectedly humorous. It’s a heroic submission of direction in the manner it brings everything to life, zeroing in on the veneer of familial harmony between the brothers to read further into these broken lives, breathing some needed oxygen into a tale otherwise bewitched by “Rocky” residue. The picture has a cracking pace, lively characters bloated with Boston bile, and a sense of neighborhood imprisonment, shaping an encrusted reality to balance out the Cinderella story.

While the boxing scenes maintain a punishing visceral feel of punches, showcasing a rich command of the sport’s body language, “The Fighter” is more of a character piece observing two brothers at war with themselves. Outgrowing his suffocating family, Micky is facing a new dawn for his career, away from the embedded perception of empowerment he’s received from those who stand to gain financially from his fighting. Reclaiming his skill with the help of clear-thinker Charlene, Micky steps into the unknown, turning his back on his brother, shattering the diseased routine of their lives. On the other side, Dickie is a mess, devoting his prime adult years to crack, which has rendered him an emaciated wreck clinging desperately to past glory. He’s all heart, but lost to drugs, leaving him in a frenzied state that poisons his brother’s shot at a lasting career.

The complex psychological interplay between the siblings is a believable yin yang of desperation, featuring two performances that rise to the occasion, each actor putting forth a specialized physicality that’s as expressive as any line of dialogue. Wahlberg admittedly receives the short end of the dramatic stick, as his screen time is devoted primarily to humiliation and speed bag concentration. Bale’s the barnstormer here, radically altering his appearance to fit into Dickie’s itchy skin. It’s a macabre thespian effort, with Bale’s sunken face a haunting image that’s difficult to shake. Portraying the dying light within Dickie, Bale delivers monumentally committed work, fleshing out a difficult role of earnest troublemaking. Russell adores the actor’s oddity, clearly more interested in Dickie’s madness than Micky’s rebirth. 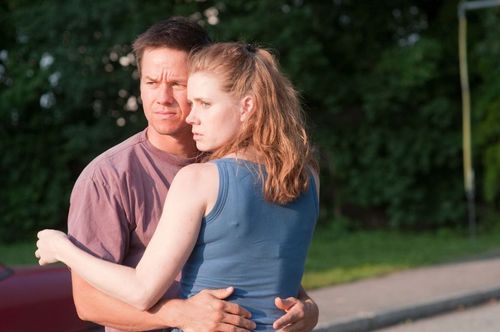 Also of note is Amy Adams’s performance as Charlene, who brings a startling sense of command to the nothing girlfriend role. Throughout the film, Russell finds plenty of knuckle-cracking Boston attitudes to exploit, most emanating from Micky’s cabal of gruff, stiff-banged sisters, yet Adams reaches a unique area of appreciation, deploying her best tough cookie impression while retaining her character’s feisty supportive nature. While the boys are allowed to chew scenery, Adams brings forth a raw, understated feeling of inspiration, enriching the creaky narrative mechanics.

“The Fighter” is enhanced by a killer soundtrack of propulsive songs, edited with a pure eye for pounding rhythms, and shot with an evocative sense of neighborhood politics and boxing authenticity. Control of the picture slips away from Russell at times, who’s so wrapped up in velocity that a few clumsy performances manage to slip by him, along with a smattering of cartoon antics as the story comes to a boil. I’ll chalk it up to enthusiasm, which is an understandable sin. Without that pronounced verve, “The Fighter” would be nothing but aggravating banality. 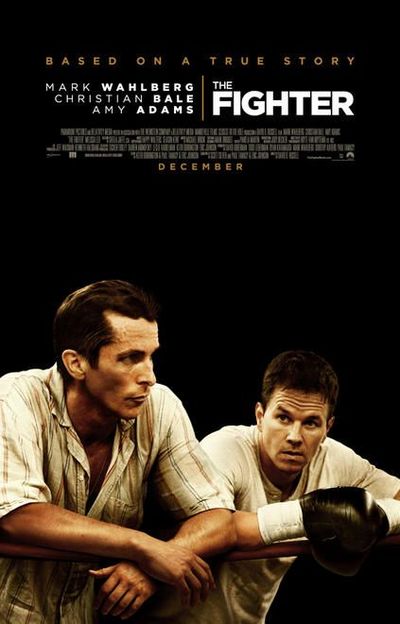 Argh! Lowell is NOT part of Boston. It's freaking 35 miles to the northwest, lodged hard up by New Hampshire on the Merrimack River. Remember Thoreau's bucolic "Two Weeks on the Concord and Merrimack Rivers?" Lowell is where those two rivers meet. Nowhere near Boston.