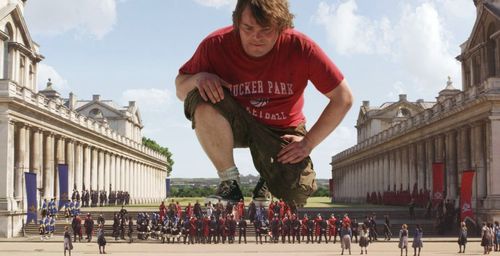 Perhaps I’m not up on my Jonathan Swift as well as I should be, but was there actually a scene in the novel, “Gulliver’s Travels,” where our titular hero, after spotting an inferno raging in the heart of the Lilliput kingdom, decides the only act of firefighting he’s capable of is to urinate all over the building and surrounding Lilliputians, creating a drippy, yellow mess? A climatic musical number where Gulliver leads the Lilliputians in a hopping rendition of Edwin Starr’s “War”? A scene where a Lilliputian soldier is accidentally plunged into Gulliver’s anal cavity after the giant is knocked to the ground?

I need to read this book again.

A slacker content with his life in the mailroom of a local newspaper, Lemuel Gulliver (Jack Black) is unwilling to break his routine, including a reluctance to ask editor Darcy (Amanda Peet) out on a date. When a change in management pushes Gulliver out of his comfort zone, the frightened doofus decides to plagiarize a few travel books to score a writing gig, thus impressing Darcy. Sent into the Bermuda Triangle to report on spooky happenings, Gulliver is sucked into a water vortex and shot to the land of Lilliput, where the residents are no bigger than the size of his hand. Branded a beast and locked away by foul security chief Edward (Chris O’Dowd), Gulliver finds a friend in Horatio (Jason Segel), a local branded a traitor for falling in love with Princess Mary (Emily Blunt), whom Edward is fiercely protective of, much to her annoyance. Soon winning over the Lilliputians with his sheer size and security skills, Gulliver becomes the focus of the kingdom, while Edward, jealous and suspicious of the visitor’s mounting lies, plans a robotic revenge. 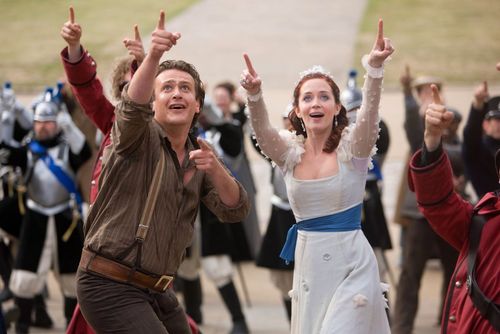 It’s not the crudeness that defines the unpleasant viewing experience of “Gulliver’s Travels,” but the sickening feeling that a major opportunity for a big-budget special effects adventure has been wasted on producers who didn’t even try to come up with a clever way to return Swift’s 1726 novel to the screen. Instead, the film is a Whitman’s Sampler of Blackisms, asking the gifted comedian to supply the least amount of effort (basically requiring the removal of clothes), while extensive CGI assumes command, providing a wonderland of small people engaging in small business. It’s tilt-shift eye-candy, but a feature film that’s wholly depressing to sit through.

It’s awful to find Jack Black relegated to playing a caricature of himself, rolling around the frame in full man-child mode, trying to sell new catchphrases as Gulliver charms the Lilliputians with his fraudulent stories of previous adventures (basically reworking plots from his favorite 20th Century Fox movies), enjoying the fruits of their speedy construction skills. There’s little challenge for Black here, and definitely no slyness to the writing that could wake up the proceedings, with the aforementioned ass plunge sight gag emblematic of the writing gifts on display here. Black’s sleepwalking, coasting on established charms, playing to the kids with mannerisms and vocal inflections we’ve all seen dozens of times before.

The pain intensifies with the rest of the ensemble, highlighting gifted comic actors like Segel, O’Dowd, Blunt (stealing scenes here), and Billy Connolly (As Lilliput’s king) floundering for funny, hung out to dry by director Rob Letterman (“Monsters vs. Aliens,” “Shark Tale”), who doesn’t have the bravery to color outside of these dreary lines. The filmmaker wastes a wonderful cast on nifty looking, but hollow theatrics, caught up in spectacle (enhanced marginally by a 3D conversion) when hearty laughs should’ve been top priority.

If the whole shebang wasn’t disheartening enough, “Gulliver’s Travels” actually has the audacity to condone plagiarism in the end, as our hero is showered with rewards for his lies. Not only is the film nearly laugh-free, but completely irresponsible as well. The ethical core of the feature is smaller than the Lilliputians. 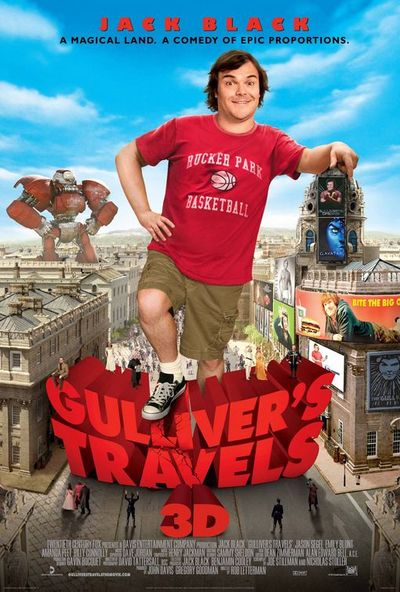 There actually is a scene in Swift's Gulliver's Travels where he urinates to put out a fire (though the other scenes are not there). However, I'm not defending this dreadful movie. I think reading the book would definitely give anybody more laughs than this drivel.