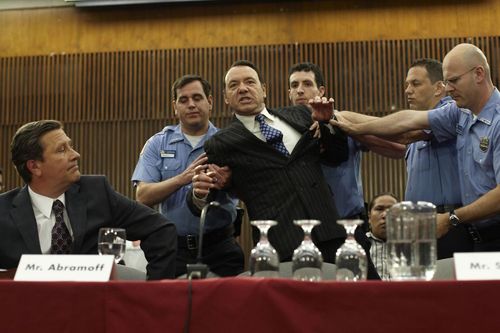 “Casino Jack” isn’t the life story of disgraced lobbyist Jack Abramoff, but merely the highlight reel of his final moments of supposed power. It’s just enough to offer filmmaker George Hickenlooper (who passed away in October) a few showy acts of desperation and bravado, stitching together a feature film about a man representative of Washington ills, but a figure not worth the screen investigation. Endeavoring to outwit the headlines, Hickenlooper attempts to turn Abramoff’s wonderland of lies into screen jazz, making a flashy, but void film in the process.

Climbing the ranks of Washington’s lobbyist community, Jack Abramoff (Kevin Spacey) wanted more for himself, looking for monetary opportunities outside of political relationships. With partner Michael Scanlon (Barry Pepper), Jack stumbles upon a dicey, but lucrative casino cruise opportunity run by thugs, needing a major infusion of cash to provide with the seed money. Stringing a Native American tribe along to extend their investment in his lobbying skills, Jack dove into a game of deception, using his panache and skill with people to open restaurants, plan schools, and charm the pants out of anyone who came into view. However, when a shady business partner (Jon Lovitz) lives up to his reputation, Jack and Michael are soon targeted for a takedown by authorities, threatening to end the life they basically stole for themselves under the approving eye of Washington. 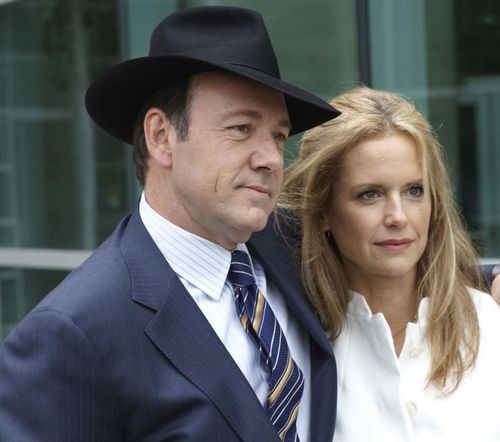 I’m sure Hickenlooper intended “Casino Jack” to achieve a higher purpose of history, retracing Abramoff footprints to pinpoint an ethical violation all but swept under the rug by the powers that be. Instead, the feature comes across as a Spacey vanity film, bestowing a juicy role of tremendous reptilian potential to an infamous overactor who dances through the picture, treating Abramoff like a one-man Broadway show.

Spacey’s enthusiasm is admirable, and his performance is technically sound and considered. However, it’s a dangerously camera-aware piece of acting that pulls consequence from the feature. We’re not watching a rehearsed man use his innate theatricality to achieve ungodly coin from naive souls. Instead, it’s the Kevin Spacey Show, showcasing the actor’s ability to showboat through Abramoff, tearing through the film at top volume, complimenting Hickenlooper’s finger-snap timing. The performance is tiring, never insightful, and despite Abramoff’s own imagination for movie quotes and celebrity impressions, Spacey never transforms into the role. The part is tailored to match Spacey’s favorite pastime: Playing Kevin Spacey. 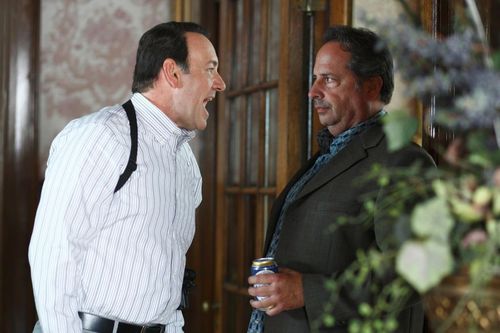 The established troubles are accounted for: scuffles with tribal leaders able to smell a rat, connections to crooked Representative Tom DeLay, and the various domestic betrayals on Scanlon’s behalf that led to legal interest in Abramoff’s sleazy activities. Hickenlooper labors to make it all dance, but the lethargy is undeniable, along with the acute disinterest in humanizing a scoundrel. “Casino Jack” puts on a fireworks display, but I doubt few will want to spend time watching the blinding colors and the deafening noise. 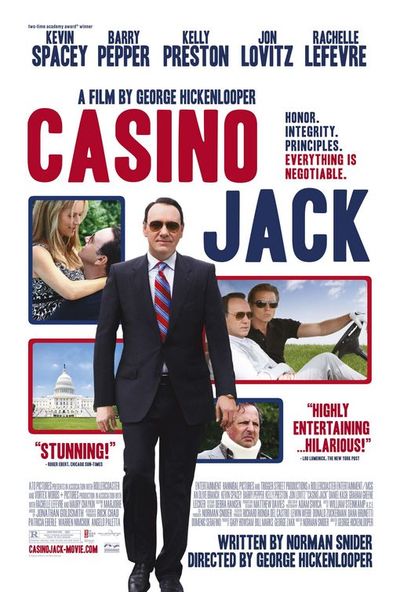