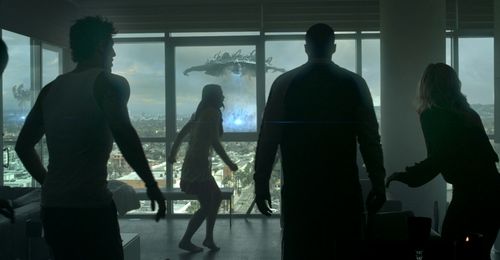 Alien invasion movies don’t need an excessive amount of encouragement to succeed. Sure, the finest features put in the time and effort to give audiences a rowdy ride of chills and spills, but as long as aliens furiously attack and some screamy humans are dutifully riled up, basic genre requirements are taken care of. “Skyline” seeks to prove that theory wrong, taking an enthusiastic premise of intergalactic war and reducing it to glimpses of chintzy CGI-laden chaos sandwiched between lengthy stretches of tedious, amateurish dramatic filler.

Arriving in Los Angeles to visit old friend/hip-hop partner Terry (Donald Faison), Jarrod (Eric Balfour) and girlfriend Elaine (Scottie Thompson) are immediately impressed with his swank high-rise digs. After a night of heavy partying, resulting in a job offer for photographer Jarrod and a pregnancy concern for Elaine, the group awakens the next morning facing a full-scale alien invasion. Armed with enormous ships and a fleet of smaller scouting machines, the invaders use a blue energy force to coax their victims out into the daylight. From the confines of the apartment, Jarrod and the gang watch in horror as the city is attacked, spending the next two days looking for a way to escape the building and head for safety. 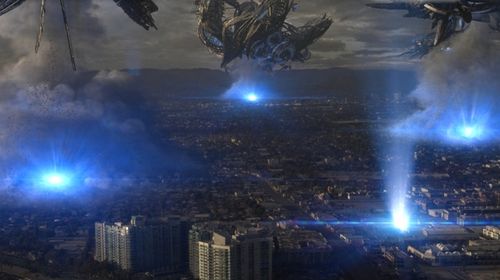 “Skyline” is a riff on the “Cloverfield” experience, only without the found footage approach and chained to a smaller budget to keep the money shots within reason. It’s basically the same premise: uncharismatic twentysomethings with insipid soap opera problems are faced with extraordinarily destructive extraterrestrial visitation, forced into escape attempts and survival mode while military forces assemble their pathetic efforts. Toss in ingredients pilfered from numerous alien invasion features of similar hysteria, and “Skyline” is one derivative motion picture.

The frightening twist here is found behind the camera, as “Skyline” marks the return of Greg and Colin Strause to the directorial arena, a few years after their disastrous turn at the helm of the “Aliens vs. Predator” franchise with the loathsome 2007 picture, “Requiem.” A major force in the special effects industry, the Brothers Strause decided to play to their strengths for a follow-up, shunning Hollywood to make a low-budget creature feature on their own, allowing them to slash costs and dictate tone without studio suits shadowing their every move. It’s a laudable idea, yet the siblings fail to make a compelling ruckus with this would-be franchise starter pistol.

Feebly scripted by Joshua Cordes and Liam O’Donnell, “Skyline” attempts to subvert expectations by keeping the action contained within the building, with alien activity monitored through windows or via telescope. While it cuts down on budgetary needs, it leaves much of the picture in the hands of the cast, and this is not the most inspiring ensemble to cheer on. Balfour’s a bland hero with no discernable range, while Faison simply looks confused with the whole endeavor. Female roles are dishearteningly chirpy and nonessential, creating an even greater divide between the digital highlights and the human lowlights, with the performances no better than similar efforts found in a backyard YouTube productions. The Brothers Strause have no sense of visual tension, trusting ineffective actors to communicate end-of-days panic. This group can barely spit out their lines clearly. 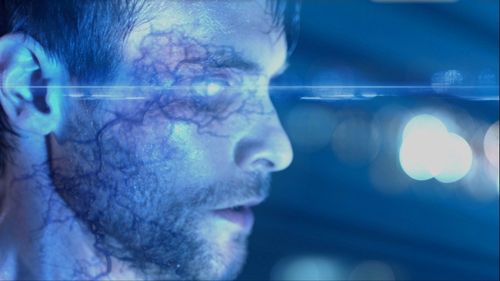 I suppose alien business is key here, with colossal motherships vacuuming up humans from the city streets like specks of dirt, and the vaguely vaginal-looking scout ships darting through the sky on the hunt for leftovers. Nothing’s particularly understood about the visitors outside of their technology and hunger for human brains, making their status as superior beings a little suspect if they came all the way to Earth just to Dyson up some gray matter. However, digging into the mystery here isn’t the point. The siblings seek to amaze with their budget bonanza, staging flaccid action as the aliens chase the humans around the complex every 15 minutes or so, offering cheap thrills sans excitement. The CG elements are satisfying in a SyFy Channel sort of way, but the pursuit is drab, again requiring these unappealing actors to sell the enormity of the effects. A sense of grand scale just isn’t there, and for a film like “Skyline,” reminding the viewer they’re watching a second-rate product isn’t the brightest idea.

A sequel is promised in the suspiciously gratuitous ending (looking as though it was tacked on to the film within the last week), which appears to be all the Brothers Strause were looking for with this cheapy, painfully uneventful snoozer in the first place: a quick meal ticket in an undemanding genre. Mission accomplished, boys. Now let someone else direct a new cast in the next one. 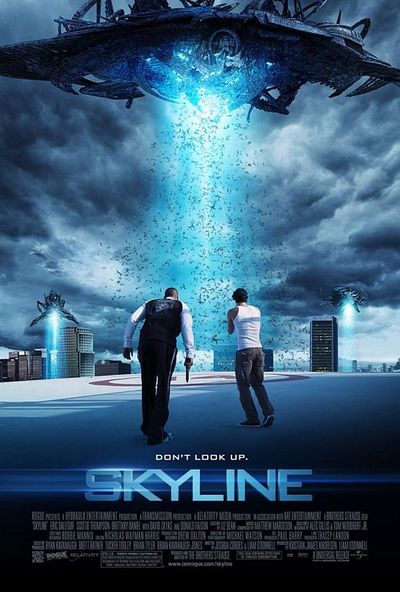 That was a little too harsh. I thought it was a pretty good sci-fi/action film, personally. Unique creatures and an interesting plot for its' genre; i don't find the actors too bad either. I feel like you aren't giving respect to some of the cheesier and more innovative aspects to a film of this sort, however, to each is their own. And I also do like seeing movies that are on a lower budget, it's refreshing. That's what I think of it, thanks for reading.
--Nick

This movie was horrible. YOu hit the nail on the coffin. So uneventful and the ending was CRAP! I was really looking forward to this movie too. How could they release such low-grade material, I mean c'mon, a fifth grader could have thought of a better ending than that weak sh&T. I want my money back!

Wow! Rude Much! You do this for a living! It's a good thing i do not pay attention to critics for the most part. Eric Balfour is a fine actor. He's done a wonderful job with his role on Haven. Scottie Thompson is not just a pretty face. She's a good actress. I do agree there could have been a better storyline. The effects were out of this world. The brothers Straus did a great job. It just seems that everybody wants to tear this movie down because they dared to be independent!

I was really excited to read the reviews for this movie and was shock to see all the bad ratings and comments.

It was a Great Movie, Great Plot, Storyline was actually good. Looking forward to Part 2 /Sequel. Who would have thought that humans will loose (For Now). Great Twist.

A big applause to The Strause Brothers.

Screw The Bad Ratings.
You have more people who loved it than dislikes.

I doubt if this movie was released by big shots companies, we might not see such bad ratings against independent companies.

Freakin AWFUL movie, chumps. I can't believe anyone would defend this piece of crap.

Shoddy, derivative effects. Laughable performances (you were too kind on Balfour). And that ending is just...mentally challenged.

Hated everything about this movie.

It all stinks. I couldn't care less what it cost to make. It still sucks.