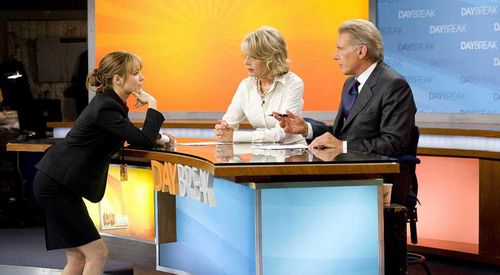 To see the screenwriting credit for “Morning Glory” go to Aline Brosh McKenna brings about immediate concern. The “Devil Wears Prada” and “27 Dresses” writer has a history of attaching troublesome romantic anchors to otherwise pleasingly combustible comedies. While she’s once again called in to ruin a perfectly good movie, her flavorless flirty antics only water down “Morning Glory” to a certain degree, with the rest of the picture showing unexpected comedic flair, led by a talented, enthusiastic ensemble.

Fired from her job producing morning television in New Jersey, Becky (Rachel McAdams) takes a network gig out of desperation, brought in as the executive producer of “Daybreak,” a fledgling talk and news program co-hosted by Colleen (Diane Keaton). Desperate to make a quick impression on her boss (Jeff Goldblum), Becky shakes up the staff with bold ideas, bringing in cantankerous newsman Mike (Harrison Ford) to provide a fresh face for the show. Trouble is, Mike wants nothing to do with “Daybreak” or Becky, forced to contractually endure his embarrassing hosting duties. Facing the demise of the show, Becky looks to chisel away years of televised routine with some sense of surprise and folly, while nursing a burgeoning relationship with a fellow producer (Patrick Wilson). 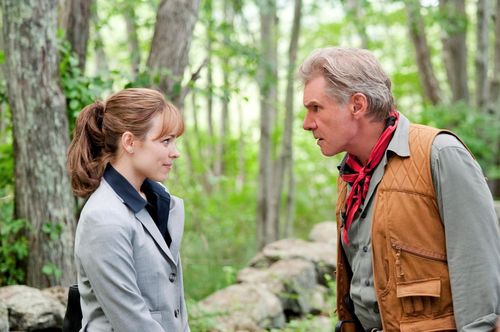 “Morning Glory” has a welcome spring in its step, supplied visually by director Roger Michell and cinematographer Alwin H. Kuchler, who shoot the stuffing out of the picture, lending the antics a wonderfully crisp appearance, peppered with careful composition that adds a certain whimsical feel needed to cut the acidic overtones of the script. It’s a beautiful, stylish film at times, generating a vital cinematic personality that pulls the picture away from its unappealing television movie inclinations.

Michell, last seen fluffing up Peter O’Toole’s sexuality in “Venus,” is faced with an unusual tonal challenge here. “Morning Glory” is part comedy, part romance, and sprinkled with some biting satire on the morning news biz -- think of it as the high-maintenance cousin to “Broadcast News.” It’s a tricky tenor to sustain and it’s amazing how well the director spins the plates for the first two acts of the film, bringing the audience into the bowels of the lowly IBS Network, where “Daybreak” dies a slow entertainment death every painful day. Becky is frantic, the staff is weary, and the stars of the show are impossible. Michell sinks his teeth into the comedy straightaway, playing broadly with tantrums and freak-outs, creating the needed waves of anxiety as Becky swims upstream to make her mark. “Morning Glory” doesn’t retain an especially sharp wit, but it’s usually on the prowl for laughs, taking its time with characters who hate one another, using that annoyance to coax out the jokes. 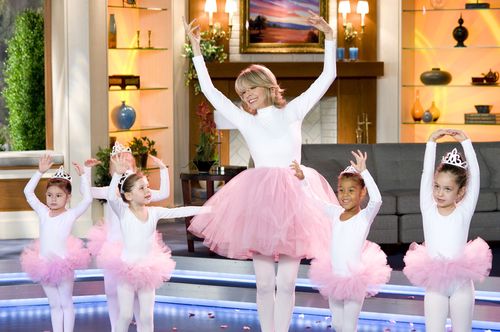 Selling the humor with tremendous frazzled timing is McAdams, who gives an atypically impassioned performance as the center of the producing storm. Registering fear, compassion, and Blackberry-engrossed distraction, the actress makes for believable television wrangler, using her diminutive size to reinforce the impossible task ahead. McAdams also makes an unlikely sparring partner with Ford, who turns his bewildering growl into a refined comedic instrument, portraying Mike as a pigheaded newsman facing a dire future of cooking segments and celebrity interviews, counting on booze and his acidic retorts to keep him comfy. Ford is exquisite in these itchy corners, creating a swell tug of war chemistry with McAdams and Keaton, who’s mostly pushed into the background as the submissive face of the morning talk show racket.

When “Morning Glory” catches a wave of satire and farce, it’s an engrossing, amusing feature, gifted superb comic flight by Michell. Once Becky decides to take a lover, the enterprise applies the brakes, stopping to soften itself, tending to a dud romance between Becky and a vanilla co-worker that bears little emotional fruit. More convincing are the young producer’s battles with Mike, working a subplot that slowly reveals a vulnerability to the veteran, tenderly paying off their bickering relationship. After all, this is a story of a cast and crew coming together to make digestible morning television. Who really cares what goes on in their bedrooms? 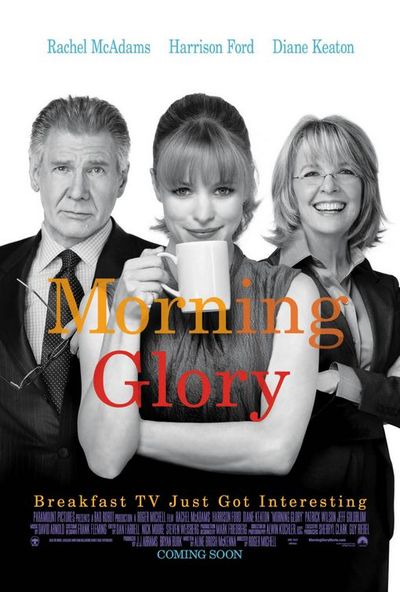