With this gifted cast and production team, it’s a crime that “Megamind” isn’t a funnier, livelier picture. A flaccid superhero satire fashioned with stunning animation, the picture feels like a runaway farce that barely wheezes out of the starting gate. The ingredients are there to make something uproarious, especially in the CG-animated realm where superhero business can assume an epic form, but there’s a distinctly deflated ambiance to the shenanigans, leaving the picture serious eye-candy on the prowl for bellylaughs it infuriatingly never finds.

An infant alien sent to Earth after his home world was destroyed, Megamind (voiced by Will Ferrell) was raised in the comfortable confines of prison, taught to loathe good and practice evil, using his massive intellect as a weapon. Growing up with Metro Man (Brad Pitt), a Superman-style hero who protects the adoring inhabitants of Metro City, Megamind has perfected the nemesis routine, often using reporter Roxanne (Tina Fey) as bait. However, when the hapless schemes of Megamind actually manage to kill Metro Man, the blue-skinned, bulbous-headed supervillian is left to live life without an equal. Finding depression and an evacuated city, Megamind turns to slob cameraman Hal (Jonah Hill) for help, using a formula to turn the schlub into a hero, thus restoring needed balance to the neurotic madman’s life.

The director of the blockbuster “Madagascar” films, Tom McGrath (who also voices one of the franchise’s penguin characters) heads in a slightly less frantic direction with “Megamind,” but his timing couldn’t be worse. Coming right on the heels of last summer’s similar “Despicable Me,” it appears 2010 is the year of the sympathetic supervillain, with the bad guys finding a heart of gold in the animated realm.

Co-produced by Ben Stiller, “Megamind” has a moderately more adult bite to it that’s initially intriguing, pushing a cast well known for their improvisational skills to lend the feature an accelerated sense of humor. The idea of letting the likes of Farrell, Fey, and Hill loose within this colorful playground is undeniably appealing, but the picture rarely clicks as smoothly as it should, caught between the slapstick demands of the genre and the exceedingly clever tongues of the cast. McGrath doesn’t sustain a welcome madness to the proceedings, clutching redemption clichés to provide a heart this movie didn’t need. Not that “Megamind” is swallowed by heavy drama; it’s a lighthearted film, but never steamrolls over the audience in a clever manner that would extensively energize the execution. Instead, the film volleys feebly between yuks and exposition, building a story I’m convinced most audiences will ignore, instead waiting patiently for a madcap tone to take command.

While the writing and pace are slack, “Megamind” does score mightily in the visual department. McGrath shows a terrific eye for towering citywide annihilation, highlighting the alien’s propensity for outlandish mechanics of destruction and his seizure of the city when Metro Man exits the picture. The 3D presentation doesn’t go hog wild, but the added dimension comes in handy when absorbing this scale of villainy. The picture is at its finest in the heat of the moment, watching as Megamind and his fish pal Minion (voiced by David Cross) prepare for battle, taking down most of the metropolis with them. The same awe holds for Metro Man as well, with McGrath hitting the swooping superhero notes comically, but effectively.

A few little improved lines from Fey deliver laughs, and an extended bit where Ferrell summons the ghost of Brando-as-Jor-El to effectively teach Hal the ways of caped heroism is amusing. Yet, overall, “Megamind” is a flat, route cartoon, though a handsomely mounted bit of mediocrity when it truly grasps the potential of the concept. 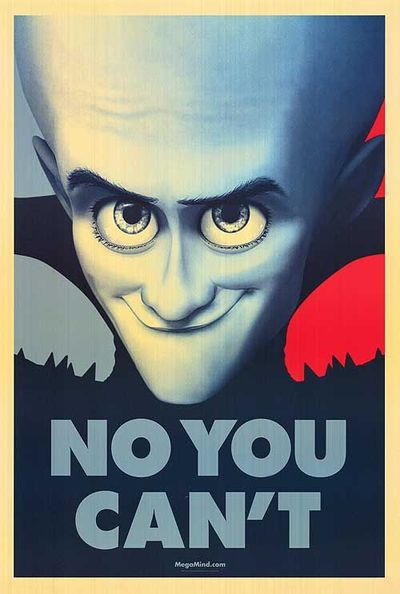 You're in a bad mood today :) ....Three out of four movies get bad reviews from you.

Anyway I like your reviews and certainly respect em.