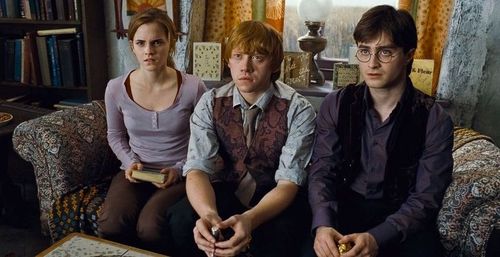 “Harry Potter and the Deathly Hallows” is at least 1/2 of a proper conclusion. The seventh book in author J.K. Rowling’s wizard phantasmagoria, “Deathly Hallows” has been chopped into two feature films to capture the full lung capacity of the material, and perhaps yank some additional box office coin along the way. But that’s cynicism, and there’s nothing cynical about this gorgeously crafted, perilous journey with three heroes who’ve grown up before our eyes over the last decade, iconically repelling evil with the support of a miraculous, focused production team. The first half of this final battle is a tonally unstoppable creature, blessed with a startling sense of stamina and grandeur to support the epic tale of a boy wizard facing a dire journey towards manhood.

Dumbledore is dead. Lord Voldemort (Ralph Fiennes) has grown in power, with his Death Eater army sent out into the world to eradicate all Muggles. With the Ministry of Magic in the Dark Lord’s pocket and Hogwarts without their influential leader, it appears all hope is lost. For Harry Potter (Daniel Radcliffe), the time has come to abandon the life he once knew and begin the hunt for special Horcruxes, pieces of Voldemort’s soul that, if destroyed, can end his heinous reign. Facing horrific threats from all sides, Harry takes off with friends Hermione (Emma Watson) and Ron (Rupert Grint) into the wilds of the world, armed with their Hogwarts training and special gifts from Dumbledore’s will, used to combat attacks from Voldemort’s minions, trackers, and the Horcruxes themselves, which extract dreadful thoughts out of anyone who possesses them. 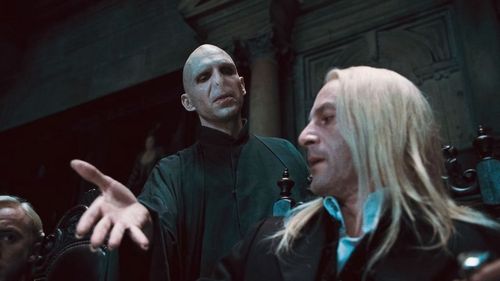 The crucial element at play here in “Deathly Hallows” is time. The rest of the “Harry Potter” cinematic saga has been racing against the clock since 2001, cleaving away entire subplots and characters to fit an average running time of 150 minutes. The snipped corners have been noticeable, but never problematic, with even the average fan who’s never picked up one of the books (a.k.a. yours truly) able to chart the dramatic progression of the story, following the characters as they mature, watching the tales erode from wizarding enchantment to doomsday horror. Instead of placing the vast narrative of “Deathly Hallows” into a snug three-hour shell, the two pictures provide roughly five hours of screentime to page through the quest, patiently absorbing the resplendent and harrowing details of the book, slowing down the entire effort in a marathon manner that might leave those weaned on the movies alone slightly disorientated.

With the tempo cooled, director David Yates (back for his third film) and screenwriter Steve Kloves pore over the nuances of character and environmental changes, delighting in the opportunity to kick the kids out of Hogwarts (nowhere to be seen in this installment) and into the treacherous Muggle world, staging much of the action in outdoor locations that open up the scope of the series. Instead of hallway antics, Harry, Ron, and Hermione are forced to trek through the forbidding coasts and forests of the countryside, shot with inhospitable magnificence by Eduardo Serra. The newfound texture of the film is a knockout punch, reinforcing this new reality for our heroes, off on a wintry adventure to confront the past and secure what’s left of their future, with the tenuous interplay between the trio making up the core of “Deathly Hallows.”

Now adults, the young wizards are struggling with a different evil during the picture, with Yates depicting a frighteningly violent realm of casualty and jealousy, upping the bloodletting and sexual unease to communicate mature fears, far removed from the endearing childish antics of the previous installments. “Deathly Hallows” earns its PG-13 rating with a swell of actual dramatic stakes, as characters are killed off unexpectedly to sustain the surprise and the triangle of pubescent wizardly valor engages in furious wand shoot-outs with assassins, including a spectacular “gunfight” inside a London café where Harry first learns there are no safe havens in which he can hide. Voldemort and the Ministry of Magic have summoned the world against the boy wizard, and this time they shoot to kill. Anyone that dares to stand in their way? Dead.

While there’s plenty of room to tell a bleak story of impending war, Yates and Kloves equally appreciate spots of silent reflection, permitting the characters opportunities to sit down and contemplate the journey ahead, with the passage of time emphasizing the doubt that’s developing within them. Any other compacted pass at “Deathly Hallows” would’ve jettisoned these preciously internalized moments without a second thought, but the extended adaptation here permits stillness to the movie that I trust aficionados will appreciate. After six motion pictures of breathless exposition, it’s refreshing to sit a spell with Harry, observing him coming to terms with his purpose, while offering unexpected acts of friendship (and impromptu dances) to his loved ones. The deliberation and general caution of the picture is a perfect way to say good-bye to this amazing run of feature films.

While the pace is slowed and the characterizations enjoy some challenging obstacles, “Deathly Hallows” remains a tremendously engaging fantasy film, with a few comedic beats from Grint that bring laughs, a showstopping midsection where the team infiltrates the Ministry of Magic (production designer Stuart Craig outdoes himself here) after downing some Polyjuice Potion, an animated sojourn that explains the origin of the titular elements, and a revival of romantic business with an appearance from Ginny Weasley (Bonnie Wright). In fact, a horde of famous faces from the franchise return here to fill out the community of wizards, villains, and ghouls, though nobody sticks around for too long. New additions Bill Nighy (as Rufus Scrimgeour) and Rhys Ifans (as Xenophilius Lovegood) pop in and out all too quickly, and there’s little room in the tale for darling Luna Lovegood (Evanna Lynch), Harry’s endearing classmate who brightened up the last few pictures with her daft charm. 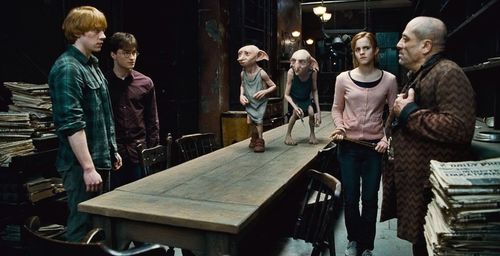 How much of a godsend has Yates been to this franchise? The most welcome presence in the picture is Dobby, the bothersome, screechy house-elf last seen in “Chamber of Secrets,” who returns here to protect his dear friends from harm. Now that’s some directorial magic.

“Deathly Hallows” doesn’t invest much in a whiz-bang cliffhanger, instead pausing the action as Voldemort attains a prized wand that will lead evil into battle…next July, at a multiplex near you. A deliberate, nervy sequel that wisely matures with the fanbase, perhaps it’s best “Deathly Hallows: Part 1” takes a few seasons off to settle into the system, building some delicious momentum before it returns with a furious final stand, soaking up every last moment of Potter minutiae along the way. 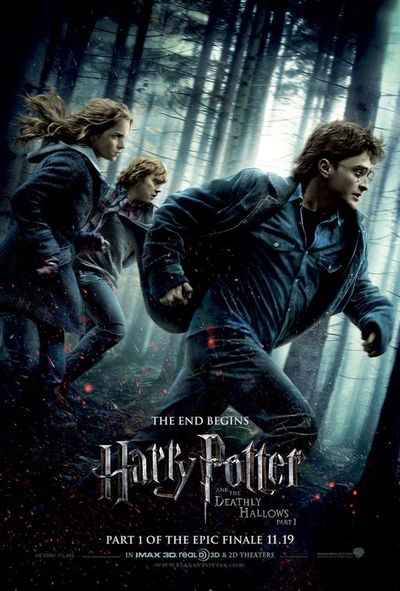 This is the review I've been waiting for...a critical analysis of the film from a critic who has only used the films as their guideline.

I have to know, because there aren't that many critics/bloggers who haven't read Rowling's saga, if all of this is making sense, from a plot and character perspective for you since movie 1.

Do you feel, now after watching Part 1, that you're getting everything? Does the film answer some questions you may have had that weren't answered from the previous films?