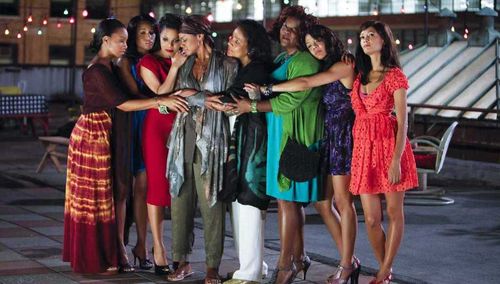 With “For Colored Girls,” Tyler Perry looks to mature as a filmmaker, ready to rip off the Madea costume and employ proven material that doesn’t exhibit the same arch DNA as his personal work, challenging the mogul to make a movie that doesn’t scream bloody murder. Well, Perry inches to the 50 yard line with this harrowing drama, but he can’t exactly give up on his favorite pastime: summoning cringing hysteria. “For Colored Girls” is monumentally erratic, but in terms of Tyler Perry’s career thus far, it’s a masterpiece, offering the filmmaker more to chew on than his own tongue for a change. A refreshing, splendidly bleak change of pace. Hallelujer.

In the city, nine women are forced to navigate the hell they call their lives. For Jo (Janet Jackson), a magazine publisher, the time has come to call out her husband on his cheating ways. Crystal (Kimberly Elise) is her assistant, wife to a combat veteran (Michael Ealy) who won’t stop his abuse. Living next door to Crystal is Gilda (Phylicia Rashad), a woman who hears the cries for help, but cannot manage to become directly involved. The bain of her existence is neighbor Tangie (Thandie Newton), a defiant floozy with severe emotional problems, brought on by the religiously blind ways of her scattered mother, Alice (Whoopi Goldberg). Nyla (Tessa Thompson) is Tangie’s teenaged sister, reluctantly seeking her sibling’s lethal advice when she finds herself pregnant. Yasmine (Anika Noni Rose) is Nyla’s dance teacher, facing her darkest hour when she’s date raped and offered little support from the police. And Juanita (Loretta Devine) is facing frustrating man troubles of her own while struggling to keep her women’s education center funded. 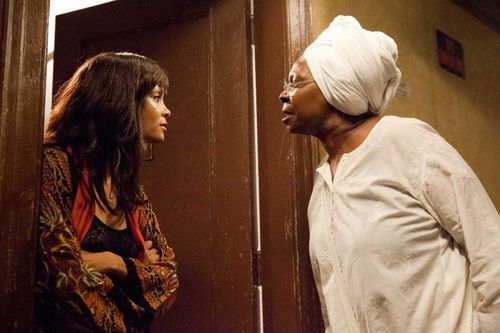 Deviating from his own playbook, Perry has come to adapt the 1975 play by Ntozake Shange with the original mile-long title, “For Colored Girls Who Have Considered Suicide When the Rainbow is Enuf.” Originally a collection of poems detailing ghastly occurrences in the lives of women, Perry has kneaded out the kinks in the material, shaping it to fit his filmmaking sensibilities. A war between the poetic and the melodramatic, “For Colored Girls” strikes a marvelous balance between the dueling aesthetics for the first hour, as Perry seems determined to avoid indulging his crass habits, hoping to prove to the world that he’s a filmmaker with something meaningful inside, stepping beyond his profitable banshee wail.

I’ll admit, “For Colored Girls” had me for the first half, digging into sickening emotional abuse and psychological disease without flinching (it’s the filmmaker’s first R-rated movie), suggesting Perry’s indefatigable care with the material. It’s a challenging feast of writing that delves into spastic, merciless acts of betrayal, yet remains calm enough to verbalize the agony in delicate verse, pushing the cast to explore the high drama and the performance art aspects of the script. “For Colored Girls” is unexpectedly frank with topics such as STDs, abortion, homosexuality, rape, and domestic abuse, yet Perry wades carefully into these confusing, disturbing areas, making time to address multiple psychological invasions while preserving the cathartic, theatrical yowl of the original text.

Showing visual ambition, corralling a cast of top-tier African-American actresses, and accelerating the instances of cruelty (making the nightmare of “Precious” look like “Follow that Bird” by comparison), Tyler Perry taps into a primal show of force that makes “For Colored Girls” tremble with a special fury. 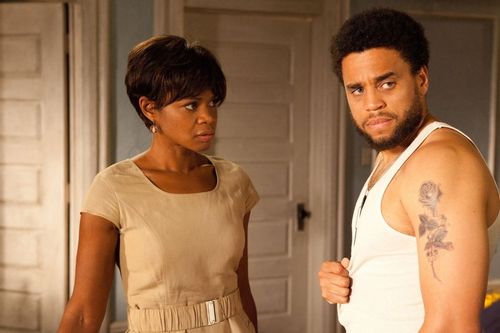 At the midway point, Crystal is faced with a dire emergency when her husband, in a fit of boozy rage, dangles their two children outside of an apartment window, threatening to drop the kids to the sidewalk below if his irrational demands aren’t met. With this scene, this agonizing moment, Perry switches from artistry to habit, turning on the strident melodramatic afterburners, which effectively transforms the rest of the film into hysterical mush. It’s as if the entire picture suddenly suffered a head injury, with the ambition to pander to Perry’s core demographic suddenly a top priority for the production. It’s a dispiriting switch, despite continued furious radiance from the ensemble, forcing the film into established footprints that suck the life out of the adaptation. Perhaps the source material’s eventual sway into poetic monologuing terrified the auteur, fearful that a dive into communicative posturing wouldn’t sit right with fans who’ve developed a taste for the wrestling match ambiance of Perry’s previous directorial efforts. The juiced up hysterics are exhausting and unyielding in their shrill tone, making a fool out of the original work, degrading sobering expressions of torment by turning the pain into Madea-slapped histrionics.

There are a few rays of sunlight on the horizon of “For Colored Girls,” offering a conclusion that collects what positive thoughts remain within these women as they confront their prison of shame. It’s a cathartic scream from a literal rooftop, well-earned, but a point rendered moot in the face of such stabbing melodramatics, Perry-approved misandry (only a single male character retains a modicum of decency), and overall dramatic perversion. 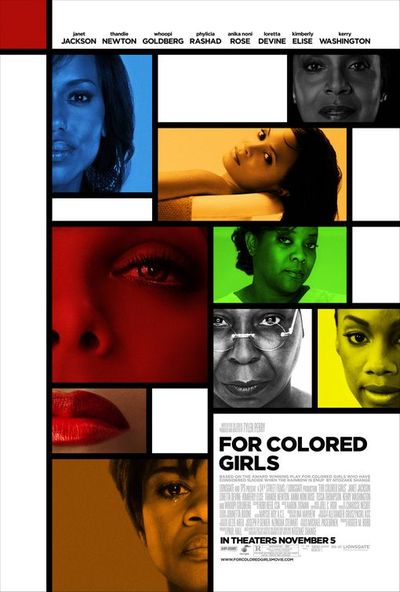 What film did you see? I thought it was brilliant. What of the performances? I mean, let's face it this wasn't going to be an after school special. I thought each of the actresses had moments where they shined and as for melodrama... How do you NOT have a bit of melodrama with all these subjects and yet keep it entertaining and "Hollywood"? I think Tyler Perry, unfortunately, has just been put into this bubble by critics - and no matter what he does they will find fault. I can't believe all the negative, warm watered reviews this film is getting. It is one of the best I have seen this year.

Im sick and tired of hearing white critics bash Tyler Perry. For colored girls was a great movie. Ive been to the movies all year and all Ive seen is stupid movies with no plot and tacky jokes and bad acting. And I havn't heard critics complain about them as much or be as harsh as their being to tyler perry. Does it have to do with the fact the movie was an all black cast. and they didnt have a white person to save the day in for colored girls, you critics need to get overyourselves