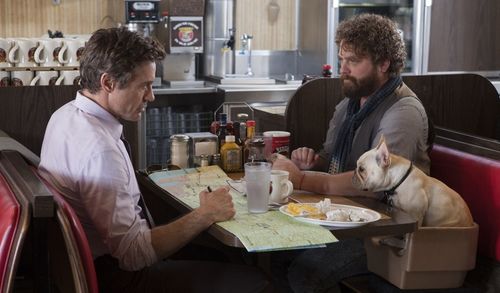 Writer/director Todd Phillips found ungodly success last year with his cheery slapstick smash, “The Hangover.” It was a return to form for Phillips, who found his goofball chi again after losing his way with the abysmal 2006 comedy, “School for Scoundrels.” His latest picture, “Due Date,” reminded me of “Scoundrels” to an unnerving degree, as once again the filmmaker blows his momentum on woeful miscasting and a script that mistakes rampant mean-spiritedness for a bong-sucking good time.

Attempting to board a flight home to Los Angeles from Atlanta to attend the birth of his child, uptight Peter (Robert Downey Jr.) meets aspiring actor Ethan (Zach Galifianakis) and his dog, Sunny. When Ethan’s brazen stupidity results in Peter’s arrest and placement on the national no-fly list, the pair is left without a plane, forced to share a rental car as they drive across America. Off to score drugs, deal with cremated ashes, and learn more about each other, the pair slips into all sorts of reckless shenanigans, with Peter growing increasingly irate with Ethan’s insanity, which consistently halts their progression. 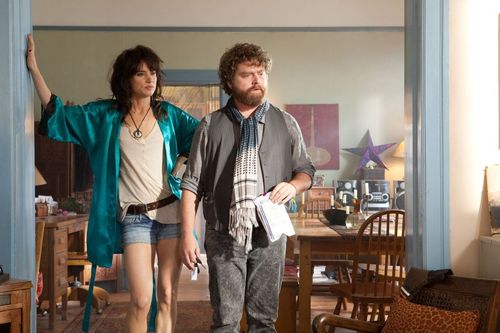 It appears Todd Phillips wanted a “Planes, Trains & Automobiles” to call his own. “Due Date” is the clenched fist version of the perennial 1987 John Hughes classic, observing a mismatched pair struggling to cross America with limited funds and deteriorating patience, encountering a vast amount of misfortune along the way. With Phillips in charge, all puffed up from his “Hangover” domination, dragging along Galifianakis and Downey Jr. for the ride, it would seem “Due Date” would have to commit an egregious sin to not register, at the very least, moderately amusing.

Defying the odds, Phillips tanks “Due Date” from the opening scene, delivering a leaden, ugly farce that’s unnaturally fixated on the rage that fuels Peter’s hostility toward Ethan. Phillips keeps “Due Date” in the shadows throughout, insisting shocking, negligent behavior from pathologically unbalanced characters is a Wonka golden ticket to a wonderland of laughs. The picture fumbles every opportunity to wake up and feel out the zaniness with a clearly pronounced sense of humor, unlike Hughes, who found inventive ways to extract unbearable road trip frustration without spoiling the fun. Phillip’s idea is to pair a bully with an idiot, leaning on his casting to make the performances meaningful. It’s an impossible challenge for Downey Jr., who’s forced to humanize a man who punches children, threatens strangers, and spits on dogs. Even the actor’s incredible command of incredulity can’t save the one-note mean machine, who spends the entirety of the film in a sourpuss state that’s unpleasant to watch. Worse is Galifianakis, who’s hopelessly lost in a shtick coma, hitting the exact same character beats that were assigned to him in “The Hangover.” While refreshing in limited supporting roles (or possibly dramatic ones, as found in last month’s “It’s Kind of a Funny Story’), Galifianakis can’t carry a film with his absurd sense of humor. Phillips and his screenwriting team turn Ethan into a catastrophic doofus who rocks a perm, likes to masturbate himself to sleep, and generally makes life a living hell for Peter, yet the actor doesn’t rise to the occasion with a fresh performance. Instead, Galifianakis does pretty much what he always does, only here it’s stretched to an interminable 90 minutes of screen time.

There’s no verve to “Due Date,” despite a frantic tone that finds the boys questioning the paternity of Peter’s baby with his flirtatious pal (Jamie Foxx) around, slipping into and escaping from Mexico, and making their way to the Grand Canyon to bid adieu to Ethan’s cremated father. Cars flip, dogs demonstrate their masturbation skills, and Peter is mangled in a myriad of ways, but it’s all a gloomy drag because Phillips keeps it pointlessly callous. It’s not deftly dark with a terrifically sinister edge, more the uninspired stuff that makes time with two actors playing jerks in a one-liner Mexican standoff feel like a profoundly unfunny eternity. 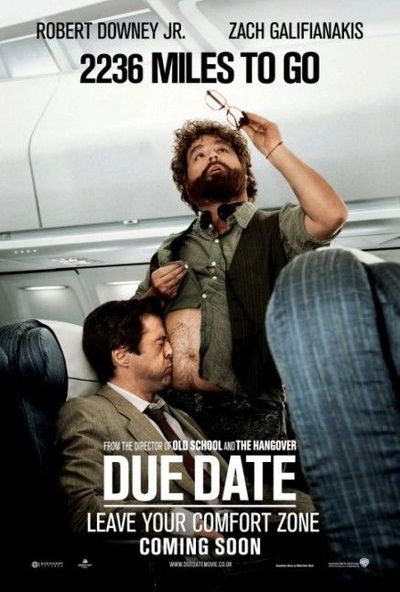 Wow. Let me first say I'm not going to read your entire review, not yet. I'm not going to see this film in the theaters, perhaps for some of the reasons you cite but also because I don't think it's a big screen kinda film. It's a simple film, basic concept, two not so buddies somehow find buddy-dom in the course of a road trip - O.K. I can buy that. The trailer is inviting if not funny but perhaps as you write (I did breeze through your review, not because it is bad, it is not, it is quite good) but as I mentioned I do want to see this one and will return to your review when I have.

I think you have a very direct and informed approach to your reviews and to be frank, that's refreshing. Thanks for the set-up with Writer/director Todd Phillips (and obviously The Hangover meant he was going to pretty much get to do whatever he wanted afterwards). I liked that Robert Downey Jr. was in this film (did you see Home For the Holidays with Holly Hunter? - solid film, funny, sentimental, reminiscent perhaps of just about everyone's holidays at one time or another) and I think Downey has never really capitalized on his innate comedic timing - o.k. I'm probably wrong there but still, the Pick-up artist and others were many moons ago. Still, I think Zack G. is wearing thin in the same way Jack Black was after he crashed into the forefront of a sleu of what amounted to lesser and lesser films - though I thought he was quite good in a more dramatic role in Margo at the Wedding. That being said, thanks for the thorough review, again clear plot points covered and a summary which sadly I did read most of and with the resounding D grade have definite reservations I wont fall directly inline with your assessment.

That being said, drop over to Above the Line when you have the time. Hey, that rhymes.
cheers->