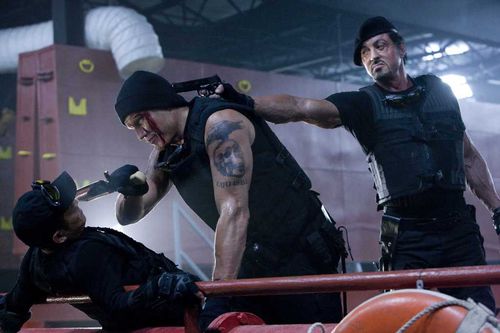 Led by Barney Ross (Sylvester Stallone), The Expendables are an elite group of mercenaries mulling over an offer from the shadowy Church (Bruce Willis) to head down to an isolated South American country and overthrow its dictator, who’s currently struggling with a rogue C.I.A operative, James Monroe (Eric Roberts). Inspired by a brave young woman (Giselle Itie) who’s chosen to stay and fight the evils of her homeland, The Expendables, including Lee Christmas (Jason Statham), Yin Yang (Jet Li), Toll Road (Randy Couture), and Hale Caesar (Terry Crews), suit up for battle, infiltrating the country armed to the teeth and ready to take down whatever stands in their way, including Monroe’s henchman Paine (Steve Austin) and a former Expendable, nutcase Gunner (Dolph Lundgren). 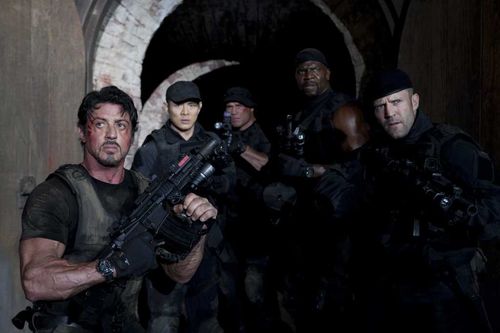 “The Expendables” is bonkers. There’s really no other way to describe what Stallone has assembled here. It’s not a tribute to the action bonanzas of yesteryear, but a reawakening of hard-charging heroic principals and room-clearing offensive tactics. Perhaps not the most rounded, elegant example of cinematic achievement, “The Expendables” nevertheless realizes the precise tone it’s chasing, making it one of more accomplished directorial feats I’ve seen this year. Stallone set out to burn the multiplex to the ground with this one, and he provides an absolute knockout punch of a film.

Of course, this grizzled, hobbling feature is not perfect. Stallone has a terrific sense of excess, but not always the best eye to convey the adrenaline rush. The cinematography is hopelessly reliant on shaky-cam to create a sensation of movement, turning sections of the film into abstract beat-downs, forgoing focus to center itself in a tornado of grunts and slashes. The screenplay also lacks a definitive wit to keep the banter awake, with much of the broheim interplay on the flaccid side, robbing “The Expendables” of memorable speeches and amusing exchanges. For a film about a bicep-bopping brotherhood, these guys don’t have much to say to one another. A few small quibbles don’t weigh down the experience of “The Expendables,” which is a stunningly violent free-for-all, continuing Stallone’s interest in feral combat scenarios, as viewed in his stellar 2008 sequel, “Rambo.” As a filmmaker, Stallone shows interest in team dynamics and sweltering locations, bringing a faint sense of story to the picture, though one of unfortunate silliness when all is said and done. At least there’s an attempt to ground the film in themes of courage and combat guilt (Mickey Rourke enjoys a few weird scenes as an ex-Expendable tattoo artist carrying around agonizing memories) before it becomes a theme park stunt show, with Stallone feeling around his script for scenes of confession and vulnerability (Christmas and his female troubles is as close to a “Sex and the City” moment as this film gets). It’s a scattered piece of screenwriting, but it holds more ambition than anyone could’ve expected, finding the filmmaker endlessly curious about these brawny men and their craving for conflict.

Blessed with a few amazing shootouts and some crunchy fisticuffs (offered a sense of humor, best sold by Jet Li and his amusing insecurities about size), “The Expendables” saves the big boom for the grand finale, where the boys storm a government compound, reducing everything to rubble and corpses. It’s not enough for Stallone to stage some exceptional fight scenes and rain bullets everywhere, but these guys even throw bombs around. That’s how tough The Expendables are. It’s a rowdy, obscenely violent conclusion to the film, but Stallone never pushes the extreme events into camp. Instead, he encourages a pure bath of brutality, sans winks. It’s up to the viewer to decide if this is all disgusting overkill or the cinematic equivalent of a firm erection. 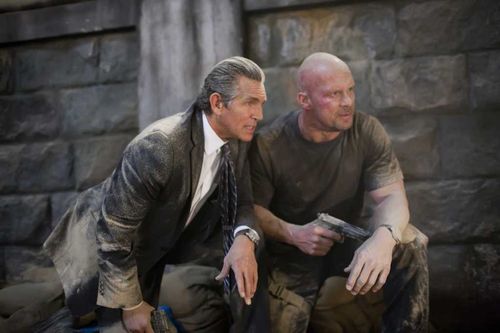 The AVC encoded image (2.35:1 aspect ratio) sticks closely to the dark, with much of the action taking place in the evening or in low-light scenarios. Shadow detail is strong, pulling textures out of costumes and weaponry, permitting a comfortable view of the action without an overly contrasted look. Colors are in good shape, coming into full view during jungle segments, with a full push of greens and browns to sell the environment, while city sequences and tattoo parlor interludes really push an evocative hot-red neon mood. Skintones are natural, with plenty of close-ups to inspect gruesome facial detail, serving the tension of the picture well. The CG bloodletting is easy to spot on BD, lessening the gore factor some, but the image here is crisp, successfully conveying the mayhem Stallone is selling.

The DTS-HD 7.1 sound mix is a hard-charging beast for sure. For a film that highlights all types of weaponry, the disc gives the listener a front row seat to the chaos, with a swirling audio track that brings about incredible directional movement, with bullets and bad guys flying everywhere, not to mention assorted explosions and grunts that fill out the dimension perfectly. While crammed with all sorts of sound effects, soundtrack cuts, and accents, the dialogue is delivered cleanly, allowed a frontal presence to help the listener along. The exchanges are rarely swallowed, remaining in play while the whole shebang goes up in flames. Low-end is delightful, rumbling along tirelessly as the violence mounts. “Expendables” is an assaultive movie, but the track separates and explores the sonic whirlwind superbly. A French mix is also available. The feature-length audio commentary with Sylvester Stallone is a charming stream-of-consciousness conversation from the co-writer/director/star of the picture. Commenting skillfully on the action at hand, Stallone delights in explaining his artistic choices, working through casting and scripting ideas that would give a special life to the final product. Philosophical, comedic, and insightful (with only a few dead spots), Stallone is a terrific guide.

“Inferno: The Making of ‘The Expendables’” (91:42) is a pure gift of a documentary. No connected featurettes, no talking heads, and no promotional filler. Just a feature-length excursion into the construction of this action spectacular. Actually, the piece sticks close to Stallone, who narrates the doc and acts as its focal point, observing the iconic star moving from pre-production to filming, taking on the Herculean task of making a colossal movie in a relatively short amount of time. We see the frustration, toil, bodily damage, and the camaraderie shared throughout the cast and crew. We also see Stallone work his army through exotic locations, dealing with weather and crew issues, capturing the strain of direction, especially from an established star reluctant to abandon his family to make a movie. The direction and editing of this documentary can’t be beat, shaping the moviemaking events in an operatic fashion that matches the tone of “The Expendables” perfectly. This is wonderfully entertaining and informative material, placing the viewer into the thick of Hollywood creation. It’s divine.

“From the Ashes” (26:36) extends “Inferno” to the frantic post-production experience, covering the trials of editing, test screenings, scoring (with Brian Tyler), sound effects and mixing, ADR, and promotion (with a tease for a possible sequel). Gorgeously crafted and illuminating, this featurette delivers further insight into the filmmaking process and Stallone’s role of leadership.

“Comic-Con Panel” (45:29) spotlights Stallone’s efforts to rally the geek nation at the world famous convention. Bringing out the cast for a few questions and stories, the charisma flows mightily, while screams from the crowd fuel the celebratory mood. Try to ignore the fact that Harry Knowles is moderating (who drones on with an interminable, unfunny intro), and it’s a riotous good time.

“Deleted Scene” (:45) restores some Dolph Lundgren to the movie’s opening, who shows up to tell a joke and kick off the gore.

“Gag Reel” (5:03) is a collection of mix-em-ups, with an emphasis on flubbed lines and giggle fits from this bad dude line-up.

A Poster Gallery with three pieces of art is included.

A Theatrical Trailer and two T.V. Spots are offered. 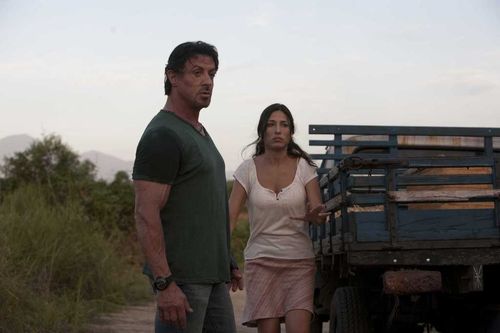 While rough around the edges, “The Expendables” is a gas, creating a marvelous swirl of visceral entertainment that truly delivers the basics of bruiser moviemaking. It’s one thing to appreciate a return to the glory days of action blockbusters, but it’s a treat to watch Stallone figure out a fresh way to deafen a new generation unaccustomed to such free-flowing testosterone.