This past summer, I had the rare opportunity to view the original “Highlander” on the big screen with a crowd of superfans and the elderly. There I was reminded just how magnificently oddball the 1986 feature is, mixing emotional fantasy escapism with rough acts of swordsmanship and villainy, moving through time and across the Earth to tell a distinctive story of immortality, backed by hyper-stylized direction from Russell Mulcahy and the heavenly sounds of Queen, who breathed romantic life into the picture with their soundtrack. It’s a splendid film filled with a fractured sense of sci-fi poetry, blessed with an ending that delivered refreshing finality.

Or so I thought.

In the 2024, the ozone layer has been replaced by a worldwide energy shield, originally meant to protect Earth from destruction, only to become a prison for those less economically fortunate. The architect of the shield, Connor MacLeod (Christopher Lambert), has grown to become a weary old man, long removed from his former immortal glory, patiently awaiting his death. From the past comes General Katana (Michael Ironside, chewing the scenery), a Kurgan-like terror who’s come to kill MacLeod and assume control of the planet. Teaming up with Louise (Virginia Madsen), an environmental crusader, and old pal Ramirez (Sean Connery), MacLeod, having retained his immortal status, seeks to thwart Katana’s plan and disarm the shield, thus restoring life to Earth.

While flawed in many ways, “Highlander” enjoyed a unity of spirit and imagination that kept it on task. It didn’t provide all the answers, but there was an ambiguity at play that felt organic, creating an engrossing legend built around everlasting life, beheadings, and love affairs spread out through the centuries. “Highlander 2” is a tragically misbegotten slab of confusion and unintentional hilarity -- it’s a bona fide disaster of a motion picture, riding off the rails in an operatic fashion that’s made it a cult classic. Almost everything that was pure and exhilarating about “Highlander” has been removed from the sequel. However, if you believe the behind-the-scenes tales of the film’s besieged, abortive shoot, it’s clear this is the best motion picture to emerge from such a disastrous journey to the screen.

In short, “Highlander 2” ran out of money during its chaotic principal photography shoot in Argentina, pulled away from returning director Mulcahy before he had a chance to finish it. Released in 1991 to universal disdain as “Highlander II: The Quickening,” the film died at the box office, laughed out of theaters. Interest was renewed in the sequel on home video, where controversial producers William Panzer (who died in 2007) and Peter S. Davis reworked the film numerous times, pulling out subplots, fixing special effects, and placing a few band-aids on the narrative. The efforts are appreciable (one sequence was shot four years after the film originally shut down), but the result is pretty much the same lump of failure. “Highlander 2” makes no sense, despite the obvious patches affixed to the picture over the years. It’s an amusingly baffling feature that doesn’t know what it wants for itself or the audience, spending a great deal of time replicating moments from the original film just to get by.

“Highlander 2” is a mess. Nevertheless, damn it, it’s a gorgeous mess.

Feeling the wind in his hair, Mulcahy imprints the film with a special rock video vibe, shooting the bejesus out of his colossal sets with an assortment of cranes and lighting tricks, constructing a fantasy widescreen mood that cannot be beat. The special effects are a jumble of professional efforts, but the core appearance of the movie, with its ornate architecture and lush sense of location, is amazing to behold, best served with a finger firmly pressed on the “mute” button, lest the cross-eyed dialogue and complete disregard for continuity get in the way. I’ve sat through “Highlander 2” on several occasions and I’m always knocked out by the look of the film -- that unmistakable magnificence of practical sets and effects that’s lost in today’s greenscreen environments. At lot of sweat and tears went into the photography of this picture, and, for the most part, the toil is evident.

This being the, I think, third incarnation of the film, with all the Planet Zeist (the home for the immortals in the theatrical cut) material stripped from the feature (making the alien visuals even more baffling), “Highlander 2” should be reasonably comfortable. Yet, the film remains hopelessly lame, wounded from the tinkering and the general anarchy of the production woes. If “Highlander” is a bloody, battered waltz through time, “Highlander 2” is a headbanging session that’s gone on too long.

The AVC encoded image (2.35:1 aspect ratio) presentation is a real mixed bag. Perhaps due to the film’s tempestuous editorial and resolution history, picture quality ranges from scene to scene, with most of the film gifted a clear look, with light grain preserving the details of the humongous sets and the intricate make-up work on Lambert. The rest is a shimmery eyesore, resembling an upscaled DVD at times. It’s somewhat distracting, especially when extended scenes are broken up by a low quality image. Some print damage was detected as well. Colors are generally good, with a vigorous sense of blue to sell the futuristic look of the picture.

The 7.1 DTS-HD sound mix is incredibly active, jumping around the room with the characters as they clash with swords and dodge bullets. Directionals are enormous, finding plenty of inspired moments to tornado around the room, though some of the most evocative sound effects are found with the crackling Quickening scenes. Low-end is forceful, rumbling along without fear, giving weight to the large-scale action sequences. Assorted sci-fi business is also propped up satisfactorily, immersing the listener in the proper mood. Dialogue is firm, though some sequences are overwhelmed by the bustle emerging from every corner. Scoring sounds suitably ethereal, while soundtrack cuts find their place in the mix.

“Seduced by Argentina” (50:05) is the official making-of documentary, walking through the troubled production step-by-step, collecting interviews with most of the key cast and crew. Whatever could go wrong went wrong during the shoot, leaving the producers vulnerable to all types of trouble, corruption, and fatigue in South America. It’s an amazing story to hear, told with a great degree of honesty, passion, and BTS footage. It’s hard to stay mad at “Highlander 2” after watching this.

“The Redemption of ‘Highlander II’” (13:46) looks into the effort to restore the film back to its original intention, through the assistance of CGI tools that weren’t around in 1990. Visual FX designer Sam Nicholson takes the lead here, walking the viewer through various stages of digital rebirth.

“The Music” (9:05) talks to Stewart Copeland, who composed the music for the film. The man has a big sense of humor, which helps to keep matters on task as he explores his musical inspirations.

“The Fabric” (10:07) sits down with costume designer Deborah Everton, who gives viewers a greater idea of the clothing choices made for the feature.

“Shadows & Darkness: The Cinematography” (5:51) greets Phil Meheux on the set of the film, discussing the intricate lighting scheme of the picture.

“Deleted Scenes” (5:48) is really more of a grab bag of moments. There’s nothing significant here, but a brief moment with that Planet Zeist nonsense is offered to remind viewers what was originally conceived. Also, there’s a ridiculous alternate ending featuring MacLeod and Louise rising up to Zeist, kissing amongst the stars.

“Original Cannes Promotional Reel” (9:29) is an extended trailer used to sell the film while in production.

The bright spot about “Highlander 2” is that, compared to the knuckleheaded sequels that followed in the bleak Panzer/Davis teat-squeezin’ years, it’s a divinely designed jumble of a film. It’s incoherent, but a joy to stare at for 105 minutes, watching as a franchise is epically flushed down the toilet. 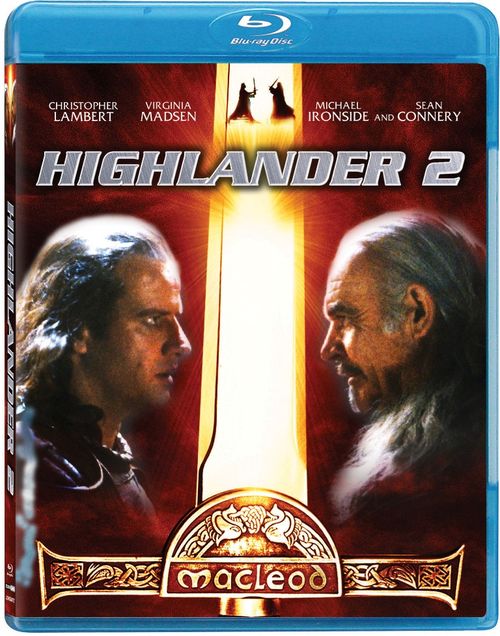