A shriveled, angular miser, Ebenezer Scrooge (voiced by Jim Carrey), has allowed his heart to harden over the years, shutting out the affections of his nephew, Fred (Colin Firth), and making life difficult for sole employee, Bob Cratchit (Gary Oldman). To help mend his miserable ways, the spirit of old business partner Jacob Marley (Oldman) warns Scrooge that he will be visited by three ghosts: Christmas Past (Carrey), Christmas Present (Carrey), and Christmas Yet to Come. Sweeping Scrooge up into the sky, the spirits show the vile man the error of his ways, detailing a life of misery if he continues down a path of bitterness.

Zemeckis first toyed with mo-cap on 2004’s holiday extravaganza, “The Polar Express.” It was an experimental triumph, showing off a dynamic range of animation and performances, allowed free digital range to make it all come to sparkling life. 2007’s “Beowulf” divided audiences, but nevertheless proved again that mo-cap permitted Zemeckis to seek out new avenues of artistic release, indulging grand visions of camera fluidity and thespian dexterity. Certainly his live-action work is missed, but Zemeckis has found a singular inspiration with mo-cap that’s heartening to behold.

“A Christmas Carol” submits a unique challenge for Zemeckis and the mo-cap aesthetic. It’s a legendary story, immortalized in a thousand different forms. The repetition urges the filmmaker to challenge the staleness of the tale, working the mo-cap buttons and levers to reimagine a Dickensian world with stunning 360-degree detail live-action can’t quite accomplish on a sensible budget. It goes beyond chipped cobblestones and apple cheeks to the otherworldly tangents of the source material, depicting three ghosts with mysterious, unsettling powers of persuasion that have the sort of silver screen dynamism Zemeckis loves to fiddle with.

The animation in “Carol” is constantly spectacular, reworking known elements into graphic, riveting extremes. Scrooge isn’t simply a man of meager soul, but a near-reptilian creature folding at the waist, excited only by money and cruelty. The CG work enjoys the challenge of representation, merging the features of the actors with the exaggeration of the characters. While Scrooge is nicely crusted and skeletal (losing Carrey’s distinct Carreyisms in the process), the rest of the roles find a happy medium between literary homage and modern star power, with little recognizable patches of Oldman and Firth (along with Robin Wright Penn and Bob Hoskins in various supporting roles) fed into the plump, Victorian spirit.

Behind the animated flamboyance are performances that tunnel deep into the dramatic possibilities of the material. It should be noted that this “Carol” is perhaps the least emotionally gluey version in quite some time, with Zemeckis utilizing great passages of silence and discombobulating psychedelics to articulate Scrooge’s illuminating interaction with the three ghosts. The film is cold to the touch, but not easily written off. Jim Carrey’s lead performance contains heady passages of pathos within a remarkable piece of acting that not only burrows into Scrooge’s panic, but also his disorientation near the phantoms, who offer the miserable man passage to a bleak future. It’s a vocal fantasia for Carrey, creatively working through the multiple roles, with only animation flourishes giving him away.

While sticking close to Dickens, Zemeckis runs off to play with a few choice moments of action. The best features Scrooge shrunk down to the size of a pencil by the Ghost of Christmas Yet to Come, scurrying through sewers and nervously riding bottles as he avoids future’s wrath. Yielding to this sort of tomfoolery is understandable, considering the stillness of the film and the stark depiction of doomsday decision making, which helps the movie to an intense PG rating. Zemeckis staging elaborate leaps, smashes, and scares is always wonderful thing, allowing for a “Carol” that stays within a boundary of reverential behavior, yet prepared to blast off when the mood strikes.

The AVC encoded image (2.35:1 aspect ratio) handles the mo-cap look of the film splendidly, exploring the digital artistry with enormous confidence. Blacks are pure and supportive, with a clear hold on the delicate sense of darkness employed by the director to reinforce Scrooge’s doom. Colors are radiant, with bold hues that keep the holiday essence alive, but also wade into the fantasy elements eagerly, with golds and greens showing a resplendency that maintains their dramatic purpose. Detail is excellent throughout, feasting on the varied animated textures provided by the production. Scrooge alone is a pause-worthy creature, with every divot and fold carefully sustained. Flying sequences and general street information (snow is incredibly convincing) is equally as gritty and clear.

The 5.1 DTS-HD sound mix is a hearty aural experience that tracks every single sound effect carefully, with a directional effort that punches up the dramatics, enveloping the listener with a gorgeously clear sense of the impossible and the heartbreaking. Atmospherics are pronounced, with Dickensian city life a particular highlight, supplying a sense of movement and community for Scrooge to stomp right through. Character nuances and dialogue exchanges are clean and spread around the track, reinforcing the sour tonality of the early scenes. Scoring is confident, kept in play beautifully to evoke the holiday mood. DVS, French, and Spanish tracks are also available.

“Behind the Carol: The Full Motion-Capture Experience” is an extraordinary supplement, offering the viewer an opportunity to view the entire feature film in its raw, unfinished state. Showcasing the work of the actors in the “Volume” (a white, empty warehouse-type structure), the viewing experience (offered PIP or full screen) provides a remarkable overview of the filmmaking event, watching as the cast works in black bodysuits with reference dots all over their faces, emoting up a storm to impart the eventual animated polish with a sense of life. It’s positively hypnotic at times, especially watching Carrey scrounge up several performances for a single scene, gamely working the format for every angle imaginable.

Helping along the “Behind the Carol” viewing experience is a feature-length audio commentary from writer/director Bob Zemeckis. While it’s a treat to have the filmmaker present to explore the genesis of the script and his artistic inspirations, Zemeckis mostly reinforces the efforts of the cast, pointing out their labor whenever he can, like a proud parent. His comments are welcome but repetitive, especially when he digs into the intricacies of the Volume and its atypical filmmaking demands.

“Capturing Dickens: A Novel Retelling” (14:43) is a promotional featurette hosted by supporting actress Jacquie Barnbrook, spotlighting interviews with cast and crew who spend quite a large amount of time justifying this latest incarnation of Dickens’s beloved novel. Talk of mo-cap (and the dreaded “T-Pose”) fills out the rest of the mini-doc, surveying the production effort in the Volume, which allowed the cast to play creatively.

“Countdown to Christmas Interactive Calendar” is the very definition of supplemental filler, gifting the BD owner their very own advent calendar. Here are 25 days of cheap little animations and little payoff. It provides mood, but it’s frivolous.

“On Set with Sammi” (1:52) meets up with pre-teen actress Sammi Hanratty, who gives the viewer a tour of make-up rooms and the Volume.

“Deleted Scenes” (8:39) are unfinished nuggets of character that flesh out Scrooge’s misery and surreal adventures with his ghostly journey. Nothing’s significant here, but they’re worth a look to see the rough stages of animation, where Volume footage is pasted on blocky pre-vis sketches.

“Carol” isn’t a warm, comforting hug of a feature film. Its sympathies are projected subtlety, assembling a moody picture of extraordinary technical achievement, not a glazed retelling of holiday reform. The distance is unavoidable, but my hope is that viewers take the opportunity to drink in the astonishing craftsmanship of the film and welcome its unsettling atmosphere. Robert Zemeckis may not have you reaching for the tissues by the end of the picture, but “A Christmas Carol” should drop a few jaws with its sterling animated achievements. 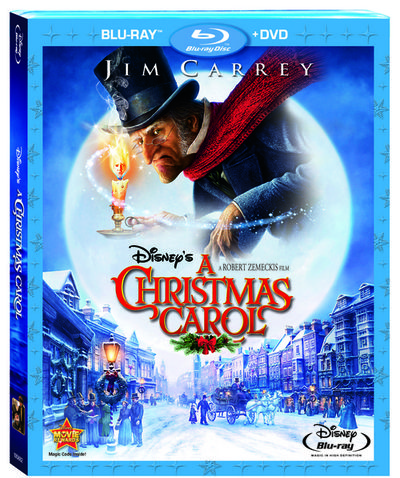