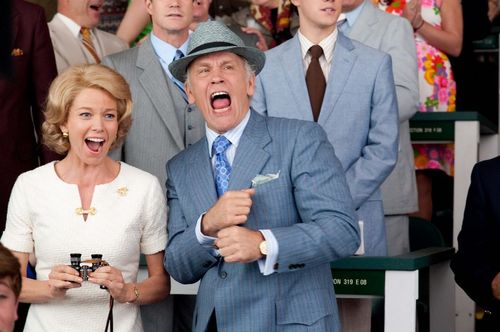 “Secretariat” has a challenging journey ahead of it, released relatively soon after the 2003 legendary racehorse picture, “Seabiscuit.” Without much in the way of controversial elements or a suspenseful conclusion, “Secretariat” feels like a nonstarter, though it’s handsomely mounted by director Randall Wallace. It’s simply a slice of cinematic apple pie for autumn, handed a firm inspirational Disney scrubbing and sent out void of a personality. I can’t fault a film for comfort food aspirations, but this tale of horseracing’s greatest champion doesn’t breathe enough fire to make a lasting impression.

After the death of her mother, Penny Chenery (Diane Lane) returns to the family horse farm in Virginia looking to visit her infirmed father (Scott Glenn). While seeking emotional closure, Penny instead finds the estate near ruin, and takes on the responsibility of restoring the family name through a prized colt nicknamed Big Red. Slowly turning away from her domestic commitments to raise a thoroughbred, Penny is faced with troublesome disapproval from her husband (Dylan Walsh), while trainer Lucien Laurin (John Malkovich) offers unique bluster to keep everyone on edge. No matter the storm around her, Penny remains committed to Big Red, who joins the racing circuit as “Secretariat,” taking the sport by storm with his amazing speed and heart. 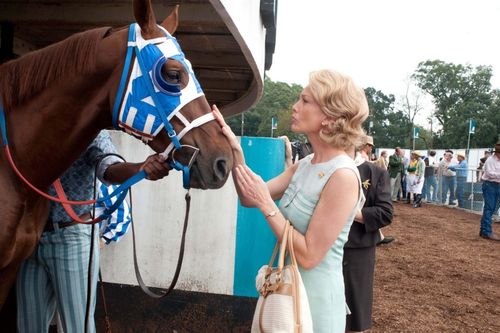 “Secretariat” is obviously constructed to be a crowd-pleaser, and I won’t begrudge its quest for broadness when dealing with the subject of an underdog horse and its underappreciated owner. These are time-tested elements, put to good use by Wallace, who assembles a brisk sporting film worthy of a few cheers and laughs. “Secretariat” has a select number of highlights worth savoring, most tied to the efforts of the cast, who bring to life a story that primarily takes place inside the head and heart of a horse. The humans are merely melodramatic asides, but they make it work, with special attention paid to Lane, who instills Penny with a mighty brawn in the face of reflexive gender discrimination, selling the stuffing out of chewy lines handed to her by screenwriter Mike Rich, a veteran of the genre, previously scripting “Radio” and “The Rookie.”

Passion isn’t a problem for “Secretariat,” but dimension is. Ostensibly a tale of Penny’s efforts to turn Big Red into a major force on the scene as a way to pay tribute to her family, the screenplay shortchanges the character, sprinting away from the true price of her commitment the first chance it gets. The way the film is assembled now, Penny all but abandons her clan to chase the horse dream, but little is explored during this time, outside of a few huffy-puffy moments from her husband and some growing pains from the kids. Wallace doesn’t manage the passing of time, and it hurts the film the further Penny steps away from her suburban obligation. Had there been more of an effort to explore the character’s struggle with gender politics of the 1960s and ‘70s, Penny’s growing isolation might’ve made some sense. As it plays in the movie, sympathies remain with the family, who pay a very unnerving price for Penny’s determination. Sure, she’s smashing a few gender barriers, but ignoring her household in the process shows aloofness I’m sure the script never intended to create. 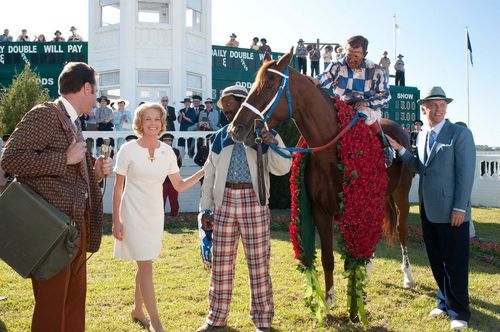 Also of some annoyance is the cinematography, which captures a period film with smeary HD cameras, cracking the historical veneer. Wallace pushes his luck further when Secretariat hits the track, busting out a crude commercial-grade camera to seize some type of “horse sense.” It’s a superfluous, gimmicky visual mistake that dials down the suspense of the racing sequences, attempting to find a naturalistic oneness with the horse in a film that doesn’t need the intimacy.

“Secretariat” is good-natured enough, but far from substantial, spending far too much time playing up the horse’s mystique (cue slow motion and thunderclaps), and not enough on the gritty particulars of the human characters. It’s rarely dull, but consistently baffling. 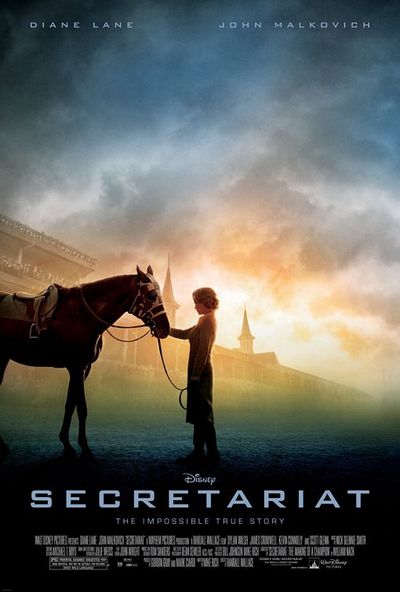