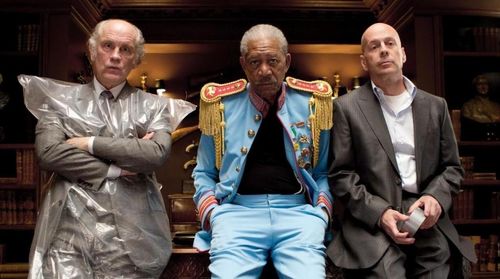 “Red” is like boarding a sinfully designed roller coaster that keeps breaking down during the frantic ride. It’s a blazing actioner with a marvelous cast, but it retains a woeful sense of kinetic movement, jutting back and forth between static dialogue scenes and hyper-stylized confrontations. It’s enough to make a viewer seasick, or perhaps a little bored between the sprays of bullets. But that’s where the old-fashioned shine of star power comes in the save the day, keeping the picture partially awake as director Robert Schwentke plots out his meticulous plan of attack.

A retired black-ops C.I.A. agent, Frank Moses (Bruce Willis) has assumed a mundane existence in Ohio, maintaining a phone relationship with Sarah (a superbly unappealing Mary-Louise Parker), a daydreaming government employee. When a hit squad attempts to take him out, Frank realizes something sneaky is afoot, soon slipping back into neck-snapping action, picking up Sarah along the way to protect her. After discovering a special list that’s targeted him for death, Frank hits up old pals Joe (Morgan Freeman), Victoria (Helen Mirren), and paranoid Marvin (John Malkovich, firmly in his element) for assistance in cracking the mystery. On their trail is Cooper (Karl Urban), a meticulous C.I.A. agent who brazenly engages Frank before learning of his critical RED status, or “Retired, Extremely Dangerous.” 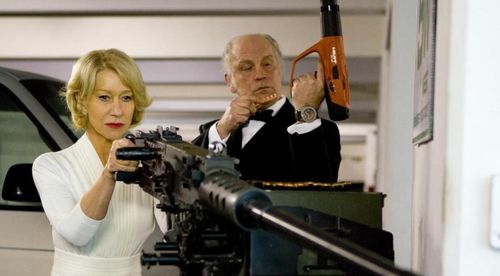 Based on a comic book series created by Warren Ellis, “Red” contains an unusually complicated story concerning betrayals, conspiracies, and assassinations, which appears to confuse Schwentke. The helmer of “Flightplan” and “The Time Traveler’s Wife” has arrived to raise holy hell, but there’s this clunky, poorly folded story to tend to before the bloodshed can commence. “Red” is a film torn between two directions: action and intrigue, but the feature wants to have it all. Unfortunately, the screenplay isn’t limber enough to juggle as furiously as Schwentke would like, leaving a picture with incredible concentration to surface details, but a turgid bore in the suspense realm.

With a full arsenal of CG-enhanced tricks to tinker with, the director dives headfirst into “Red,” manufacturing an action film that fetishizes firearm discharges and near misses, pushing the cast through a few frantic encounters that play into the bold comic book nature of the picture. Schwentke’s eye is fantastic and his sense of humor remains intact while managing ungodly destruction, leaving the exaggerated cinematic exploits of the film a joy to behold. When it wants to be, “Red” is immense fun, slamming around with Frank and the gang as they attempt to remain one-step ahead of the bad guys, exercising their old survival instincts with palpable glee. 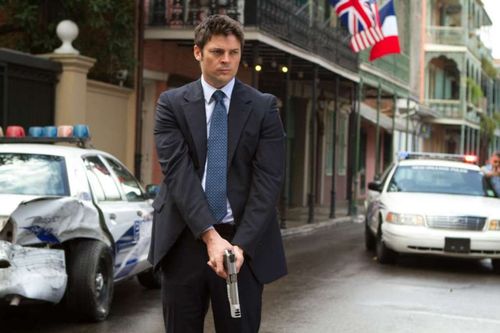 Having a cast with this type of wattage certainly gets Schwentke out of a few jams. Though Morgan Freeman is regulated to more of a cameo role, the rest of the gang digs into the stylized mood comfortably, with Helen Mirren nearly stealing the film. As the dainty domestic queen with a penchant for machine guns, Mirren latches onto the wicked tone of the picture, gracefully communicating the contrast between the mundane routine of retired life and the ecstasy of urban warfare, helped in part by a flirtation with an old Russian suitor (Brian Cox). Also enjoyable is Karl Urban as Cooper, gamely taking all the hits as the character attempts to track Frank and the gang down. Urban matches Willis well in the blue steel department, leading to a bruising mid-movie showdown where the two opponents beat the stuffing out of each other inside the C.I.A. headquarters.

While bodies are hurled through the air with skill and the blow-em-ups are cared for quite nicely, “Red” must eventually tend to the iffy plot. Criminally, Schwentke keeps returning to the conspiracy between action beats, creating potholes in the pace that grow more abyssal as the film wears on. “Red” is an amusing picture, but it’s an odd case where actual storytelling gets in the way of the movie’s excellence. 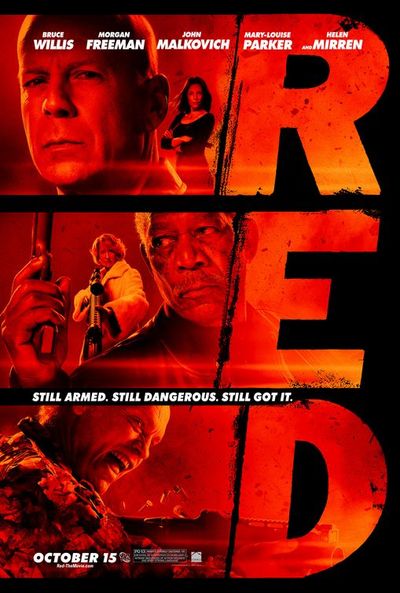