“Chain Letter” isn’t a motion picture, it’s a cry for help. The horror genre is chock full of determined young men stepping up with their own visions for splattery cinematic dread, but Deon Taylor is a special threat. An exceptionally clueless filmmaker, Taylor takes full command of “Chain Letter,” hoping to kick off his own bloody slasher franchise that also makes time to warn the world at large about the dangers of technology. A severely muddled, amateur offering, the film is a complete waste of time. There’s almost pride in the manner the feature highlights Taylor as arguably the most inept director of 2010.

In a quiet California suburb (supposedly the “communication industry capital,” but the film doesn’t offer much proof), a group of high school pals receives a demonic chain letter through their e-mail, promising death to anyone that deletes the message without forwarding to five friends. As expected, everyone blows it off, but soon a faceless monster has come to make good on the murderous promise. He’s a hulk with a taste for thick metal chains (I’ll call him “Dick Chainy”), taking out the teens one by one, while clueless cop Crenshaw (Keith David) stumbles around for clues, tracking the origin of a special link. Using her online skills, teenager Jessie (Nikki Reed) takes up her own detecting, hoping to save her friends before Dick Chainy enforces the rules of the letter further.

“Chain Letter” is an old-fashioned moviemaking mess; Ed Wood meets Uwe Boll, but lacking the sweet release of high camp. It’s a constipated feature film, crammed with so much ambition to submit a grisly slasher experience, but lacks a clear filmmaking vision that could marry some intelligence to the mundane massacre. Here’s a film that corrals a cast of rotten young actors, appears edited with a fire axe, and even has trouble remaining in focus on occasion. Though it took three people to write the screenplay, there’s not a single character arc that trips past the starting line, with Jessie looking about as upset with the death of her dear friends as she would with a spilled can of Red Bull. Surely if there was a killing spree going on in my backyard, I would be an emotional raw nerve. To pull at that thread a little more: if I were a cop with a killing spree going on in my backyard, I would call for backup before entering a clearly marked lair of doom.

It’s futile to take “Chain Letter” to task for dramatic inertia, but Taylor could’ve put forth some effort. Instead, the film is all about neutered gore shots, where Dick Chainy bashes, smashes, and harpoons his victims, for reasons never truly understood. To keep the film topical (though the movie was shot three years ago, hence all the flip phones and use of MySpace), the screenplay is injected with a particularly insistent message on media ubiquity -- how the loss of privacy through communication devices is the greatest threat facing the nation. Commendable? Eh. At least not in this hogwash, which torches all sense of social importance by lacking even a morsel of sense. Dick Chainy is actually a beastly tool for “apocalyptic luddites” who want to reclaim the world of information, and that’s about all I could comprehend from this woeful movie between the idiotic kills. The rest is a blur of crummy acting, crap indie band promotion, and total directorial ineptitude.

To make matters even more puzzling, “Chain Letter” doesn’t have an ending. It just stops cold, perhaps expecting to pick up the action in a sequel that will never see the light of day. If the rest of the picture offered some hope, I would be furious with the bewildering climax. However, after 80 minutes of insulting stupidity, I was relieved the movie was finally over. 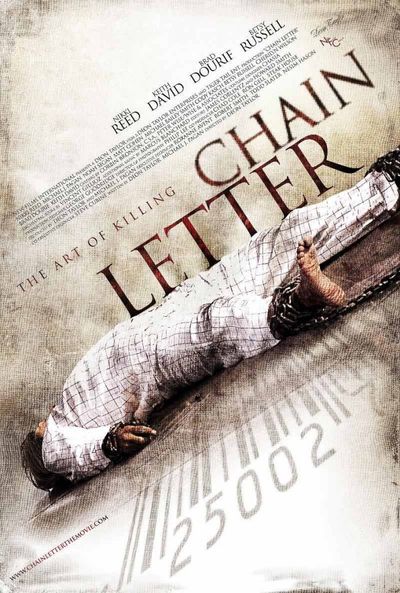 hey, don't be too harsh. the movie may have had a few cheesy lines here and there, but the gory scenes were pretty hardcore don't you think? i think the movie did well in that sense.