Blu-ray Review - Disneynature's The Crimson Wing: The Mystery of the Flamingo 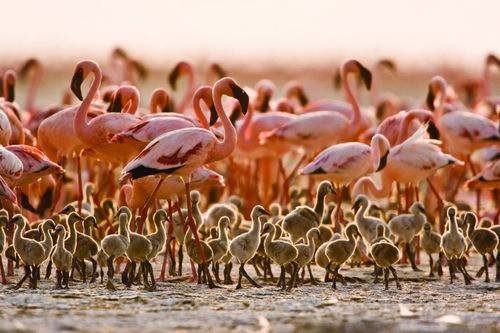 Reduced to front lawn kitsch or John Waters-approved tomfoolery, achieving legitimacy has been a difficult journey for the pink flamingo. “The Crimson Wing” is a charming Disneynature documentary looking to restore some regality back to species, capturing a year in the life of the African lesser flamingo as it rises from egg to adult, fighting to avoid horrific threats from nature’s various predators along the way.

Directors Matthew Aeberhard and Leander Ward take their cameras to Lake Natron, located in southern Tanzania. With water rich in sodium carbonate, the lake hosts a community of lesser flamingos every year, who swoop in to sate their instincts, taking over the landscape in a mass orchestration of breeding. Raising little ones in a harsh, boiling environment, the filmmakers capture the essential stages of flamingo life, observing these odd-looking creatures prepare for survival. However, there’s always trouble afoot, with various enemies out to halt maturation, feasting on those who cannot keep up with the gang.

With “Earth” and “Oceans,” Disneynature was searching for the bigger picture. Hunting for a way to address the world’s beauty and ills, the documentaries bent over backwards to provide a sweeping global viewpoint. “Crimson Wing” remains intimate only with the flamingos, slimming down epic scope to capture the pink birds as they fight for life throughout the year, with the younger members of the society struggling to live long enough to see their own flying feathers grow. The sharper focus helps the film out immensely, cautiously shadowing a throng of flamingos as they instinctually figure out a way to protect themselves when everything in the land would benefit from their death. 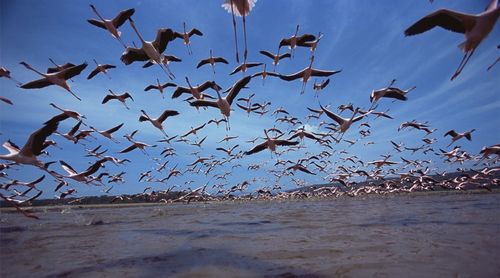 While the majority of the feature is standard animal documentary fixings, I was impressed with the film’s eagerness to display flamingo mortality. It’s a bold “circle of life” choice from the filmmakers to reinforce the sacrifice made by the few to protect the many, as little baby chicks are picked off by storks and hyenas in a stark manner that keeps the threat of predators vivid throughout the film. Nature gets in a few licks too, with the supreme salt content of Lake Natron occasionally locking young flamingo feet in sodium shackles, paralyzing the birds. Death is a major component of “Crimson Wing,” with a refreshing matter-of-fact depiction that brings about a genuine feeling of shock. Being a Disneynature production, I kept waiting for the eventual cutaway, but the documentary rarely flinches, showing exactly how outside forces slip in and feast on the weaker flamingos. It’s ghastly, but hey, that’s nature.

The AVC encoded image (1.85:1 aspect ratio) is a flawless representation of the feature film. With gorgeous HD cinematography, the BD digs right into the inherent beauty of the land, hitting viewers with an amazing pitch of hues to feel out the grandeur of the Lake Natron area. With pinks and oranges popping right on out, the presentation holds a special clarity. Detail is superb all around, gifting the viewer a chance to study the birds and, in some cases, the ghoulish details of death. Salty locales also offer a unique visual opportunity. Shadow detail is crisp and expressive, while the natural wonder of the land shines on through, absent any digital hiccups.

Inherently modest in design, the 5.1 DTS-HD sound mix is a welcome experience that emphasizes the naturalistic sounds of the flamingos and the surrounding area. Thunderclaps provides a swell low-end jolt, while the rest of the track sticks with the cacophony of flamingo calls and grunts, filling the surrounds with a merry directional appeal that keeps the listener in the thick of this bird gathering. Scoring cues are very modest but aurally purposeful, winding gently around the mix, buttressing the on-screen antics marvelously. Feelings of flight and pursuit are strongly represented, keeping the suspense at top speed. English DVS, French, Spanish, Portuguese, Italian, and Dutch tracks are also available. 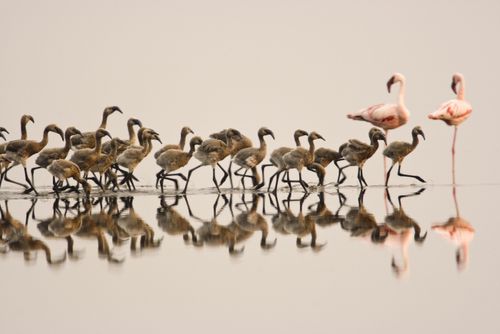 “Living Planet” takes the viewer to an interactive globe, offering locations to click that contain facts and featurettes about conservation and wildlife.

“Filmmaker Annotation” is a trivia track that runs with the picture, offering featurettes and notes to help understand the stars of the film and the moviemaking process. Of special interest is to hear how the picture was conceived: scripted out beforehand, leaving the directors to go out and “collect” shots that could be formed into a narrative.

“Lake Natron Diaries” (19:42) is a collection of featurettes that cover the making of the film, with a welcome display of BTS footage showing how it was all accomplished. Interviews with the crew are enlightening, exploring how all this work captured under a cruel sun was collected into the feature film.

The brutality is only a small portion of the film, with more time devoted to the serenity of flight and the remarkable vistas surrounding Lake Natron, detailing the magnitude of the area before a final reveal of ecological damage. Honestly, the flamingo is an odd choice to topline a nature documentary, yet “Crimson Wing” strikes a compelling tone as it investigates a frequently misunderstood bird, soaking up the beauty of their temporary realm, watching as they move from tiny curious creatures to eye-catching adults with a most urgent of purpose. 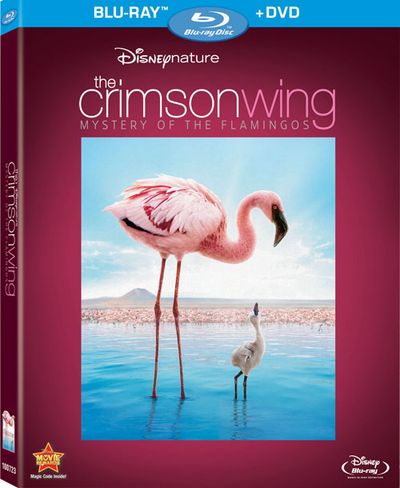