In August of 2009, James Cameron devised a unique way to promote his upcoming movie. The event was called “Avatar Day,” offering the curious and the faithful an opportunity to view 16 minutes of exclusive footage at a nearby IMAX theater, helping to increase awareness of the blockbuster-to-be, while also revealing a substantial look at the 3D artistry of the film, which, up until that point, was mostly a mystery outside of a few trailer sneak peeks. The experience was short, but very sweet, doing its part to build “Avatar” into the box office behemoth it eventually became.

If it worked once, why not again?

With “Tron: Legacy,” Disney is taking an incredible financial gamble on a sequel to a film that only did middling business…in 1982. Decades have passed since the original “Tron” hobbled onto the movie scene, leaving the studio in a scramble to position this ambitious follow-up in way that appeals to the substantial fan base that’s developed for the film and the unsure family audience looking for a little pizzazz this holiday moviegoing season. Thus, “Tron Night” was born, presenting 23 minutes of 2D/3D footage from the sequel to help ease the rabid and the reluctant back into the electronic mindset.

The footage was divided into three general movements. Part one was the set-up, showing how spoiled twentysomething troublemaker Sam Flynn (Garrett Hedlund) is offered clues from Alan Bradley (Bruce Boxleitner, making a welcome appearance) concerning the whereabouts of his missing father, Kevin (Jeff Bridges). Riding off to the iconic Flynn’s Arcade, Sam enters the dusty, abandoned shop (Journey is still on the jukebox) looking for any trace of his dad, instead finding a hidden back room workspace with a familiar laser resting in the dark, ready for orders. Zapped into the world of the Grid, Sam comes to the quick realization that everything his father ranted about long ago was true.

Part two was devoted to the spectacle of “Tron: Legacy,” showing off not only the impressive 3D work on the film, but the sheer size of what director Joseph Kosinski has dreamed up for this continuation. With towering Recognizers and vast glowing vistas filling the frame, the sequel immediately steps light years beyond the original picture’s visual achievements (not a criticism, as the 1982 movie remains perfect eye-candy), submitting a distinctly epic feel of an energy world at work, pulling in assorted characters from the fringes of Kevin’s imagination to compete in the vicious games that entertain the growing populace. For Sam, this means enduring a rather seductive ritual where he’s fitted for a bodysuit and armor from four model-type Siren programs clad in skintight white costumes, and presented with his identity disc -- the signature Frisbee prop from the previous film handed a sleek redesign. With that, Sam is sent into combat, pushed into a furious Disc Wars tournament where he learns the chilling derezzing price for a wrong move. 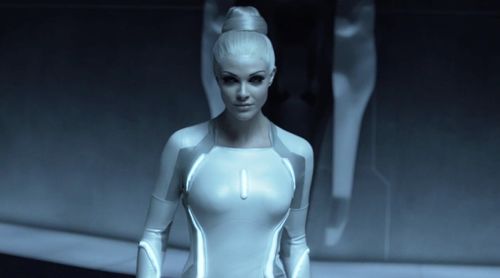 Part three returns to the intimacy of character, with Sam meeting Quorra (Olivia Wilde), a spunky sidekick who possesses outstanding driving abilities (oh yes, the light cycles return, much to the fist-pumping delight of the crowd I viewed the footage with) and mysterious secrets of her own. Finally, Sam is faced with his father, Kevin, who can hardly believe his son has followed him into his computer madness. I wasn’t expecting the footage to cover anything from Jeff Bridges, but I’m thrilled this reunion scene was stuffed into the mix, communicating an unexpected emotional core to “Tron: Legacy.” Tears are stifled and hugs are awkward, but it’s a gentle moment between a spaced-out father and his tentative son -- a tender pit stop before the action heats up again. 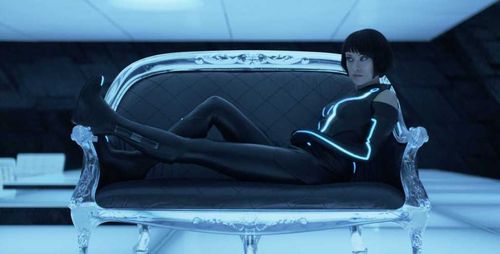 Closing with a modified trailer for the film, “Tron Night” was over just as it was getting going. Ah, the agony of the pullout method.

Being a fan of “Tron” and generally supportive of sequels with an incredible divide of time to conquer, I’ve allowed myself the death sentence of high expectations. It’s true that Garrett Hedlund is an enormously limited actor (he’s yet to give a worthwhile performance in anything he’s appeared in), and the footage here reinforces his lack of skill, but the scale of the production is mesmerizing, glazed with a deliriously fitting electro score from Daft Punk. Can’t forget Jeff Bridges either, who looks amazing as the aged Kevin, looking out over a sea of light that’s possibly slipped out his control. For 23 minutes, “Tron: Legacy” had me. I can only pray the rest shapes up to be as spectacular. 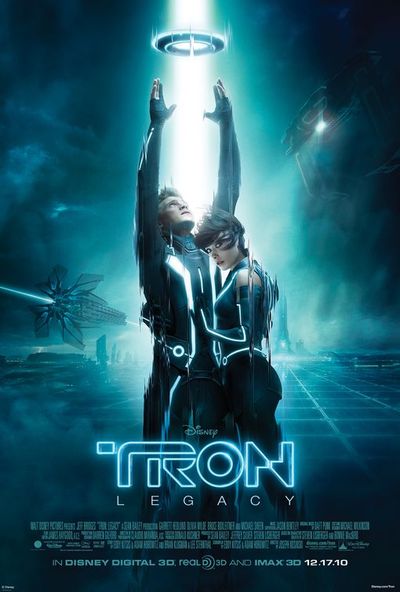 Ok, great. But why are all the characters wearing rubber motorcycle suits with four pieces of reflective tape on them? Clearly the art direction has ditched the original's clunky, high-tech feel for a bland, Matrix style. Yawn on that. I'm afraid all the trailers I've seen make it look like a Revlon mascara commercial from 10 years ago. I'm psyched to see the ultimate scale of the thing, but I'm afraid the picture lacks the touch of a true visionary. Fuckin' Disney.