Home Archives Profile Subscribe
Sunday in the Park with Brian - Islands of Adventure
Trailer Tuesday - U2: Rattle and Hum (1988)

A Visit to the Family Feud 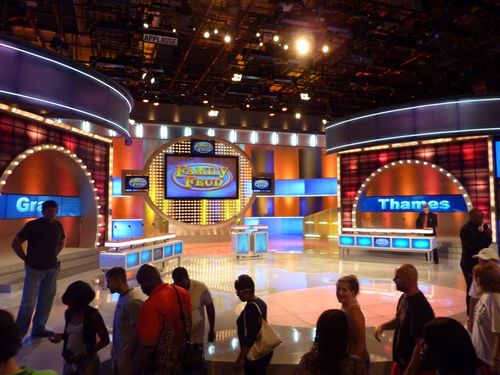 Years ago, I did some P.A. work on a game show set inside the vast home of Midwestern capitalism, Mall of America. I spent roughly four weeks dinking around the set doing menial work while filling my pockets with craft service Twizzlers, but during this magical time I was allowed access to the world of game show production, observing how they’re cast, assembled, and, well, faked. Not “Quiz Show” faked, but enhanced through retakes and intense coaching to make cash and prizes feel like CASH AND PRIZES! The disillusionment was substantial.

I was aware that a rebirth of the “Family Feud” was taping nearby this summer at Universal Studios Orlando, but I could never make the timing work. However, with the final week coming up quick, I couldn’t put it off any longer. I’m no game show junkie, but I was curious to wade back into the television production waters, trusting that my previous experience with behind-the-scenes chicanery was an anomaly. After all, new host Steve Harvey is a good Christian man. He would never allow such mischief to sully his reign as the beaming face of a 34-year-old television franchise. 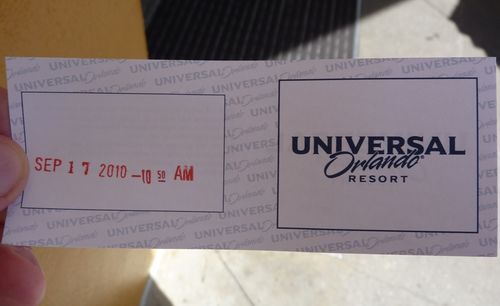 While the promise of seeing “Family Feud” in motion was the ultimate goal for the afternoon, there was also the intriguing opportunity to waltz around the normally verboten production area at Universal. Obviously, the soundstages are pretty much dormant these days (TNA Wrestling shows up every few months, and I believe a chunk of “The Final Destination” took over some prime Universal real estate last year), so there wasn’t much to spy. Still, there was a cheap thrill with this backstage stroll, despite the complete lack of production activity. “Family Feud” had the entire joint to themselves.

Being a member of a game show studio audience requires patience. Gobs of it. The posted schedule demanded two hours of bathroom-free time to tape two episodes, which didn’t seem like such an outrageous burden. After all, my experience on the MOA game show was fraught with cast and crew members dicking around for reasons unknown, perhaps locked in a sinister wager to see who could make the tedious workday last the longest. Two hours seemed like a breeze compared to the dawn-to-dusk slog I endured before. 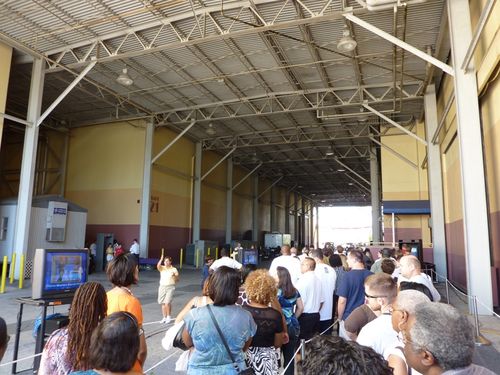 To keep energy up before the show begins, hip-hop and rap tunes are blared at top volume throughout the glowing studio. It’s Jerry’s mission to sustain the energy of the music while the professionals take their places and audience instruction (clap!) is solidified -- typically, a 10-20 minute job. This time, Jerry had to fill a solid hour. That’s a solid hour of smiling, clapping, and feigning excitement when a new Black Eyed Peas tune hit the speakers. I felt bad for Jerry, at least for a while. Then I grew to resent Jerry, as he made the audience stand up and dance in place, fearful that any break in the action would torpedo the crowd’s ability to cheer on crappy answers to creepily sexualized questions (oh, it’s a whole new “Feud” this year). If Jerry spies one yawn, Jerry fails. Jerry doesn’t like to fail. 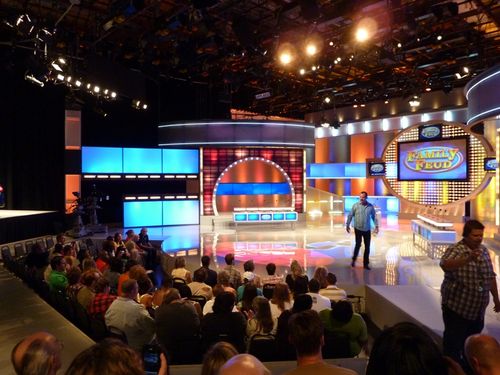 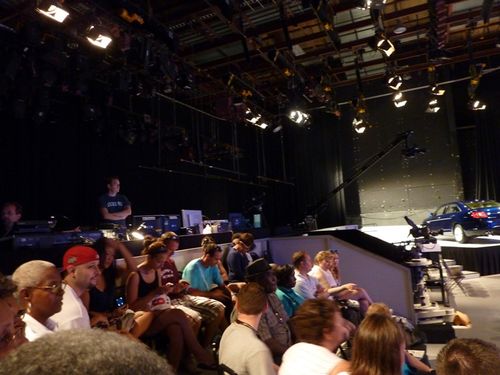 Imagine a group of tourists, locals, and Universal Marketing stooges trying on some elementary body moves. Not pretty. It was like a particularly resistant bout of senior aerobics. While some of the more camera-ready contingent caught the boogie flu, most (myself included) participated out of fear of being singled out by Jerry, who was looking for any reason to slap the spotlight off him. One man can only amp up a bewildered crowd for so long before he runs out of activities. I lost faith in our fearless leader once he started listing all the things he bought with his “Family Feud” paycheck. Jerry sure could dance, but I couldn’t applaud his lousy sense of tact.

After an hour of bizarre improv from Jerry and an entire box set of bass-heavy hits, Harvey finally decided to show up. Finally, the “Feud” could flow.

Steve Harvey is a funny man, capable of generating a good zinger when pushed up against the wall. His leisurely personality isn’t for everyone, but his work on “Family Feud” is genuinely goofy and swift, working well with the reaction format of the show. He’s a confident host, making the two episodes entertaining to watch, taking my mind off my increasingly battered hands, cruelly ordered into battle whenever somebody blinked on stage. Enough with the clapping already! During “commercial breaks,” Harvey would stroll over and converse with the crowd, answering questions and absorbing fandom, launching into stories that would turn a two-minute pause in the action into a 10-minute monologue. The man’s an outstanding raconteur, but when the action slipped over into the three-hour mark, I just wanted Harvey to zip it and play the goddamn feud. 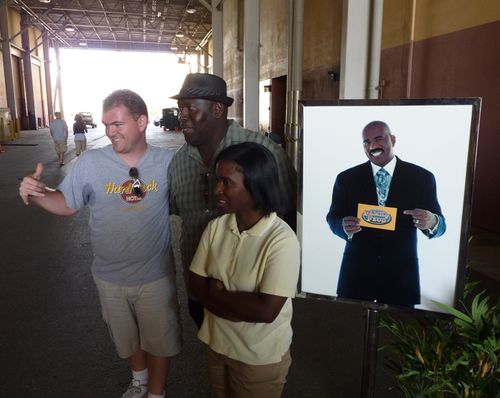 There’s isn’t much overt hustle to “Family Feud” that lessens the game. Unlike the MOA program, where the producers would order multiple takes of contestants winning money until they hit the precise pitch of “realism,” the “Feud” only stopped the action once to correct a particularly dingbat contestant. The rest of the show is highly rehearsed (the competing families are instructed to ham it up nonstop), but rarely faked. Though one moment, where a family was instructed where to stand and how to explode with delight after winning a car, before they actually won one, struck me as a little…let’s say, peculiar.

Two hours stretched to nearly four when all was said and done. After the last show, Jerry pushed everyone out the studio doors, ready to welcome the next round of unsuspecting visitors and their pink, soft, virginal hands. Oh, how I envied those folk. My slappers were numb for a few hours afterwards, leaving me with a stinging reminder of the afternoon I spent engaging in unconditional support for obnoxious strangers, on the hunt for prizes they may have already won before the taping began. 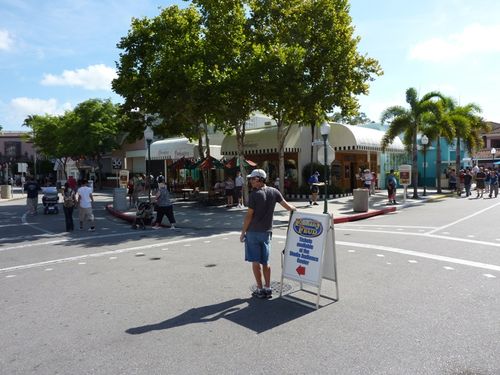 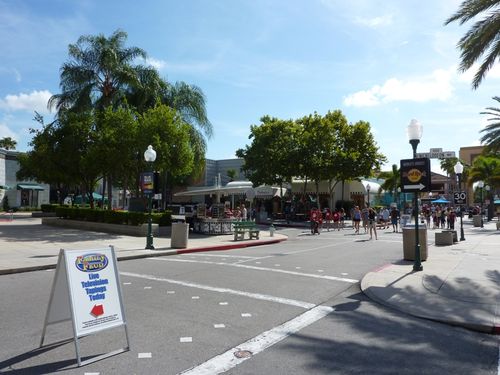 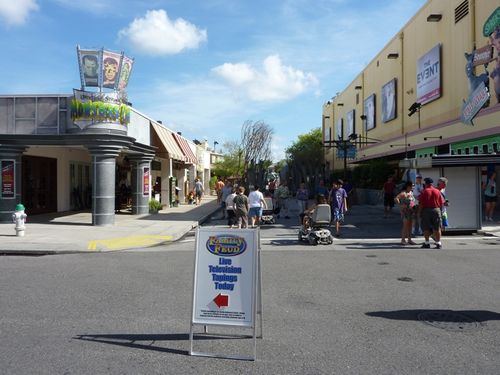 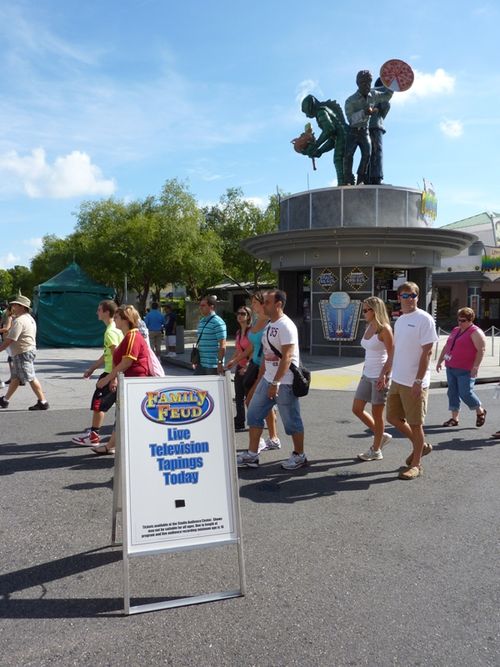 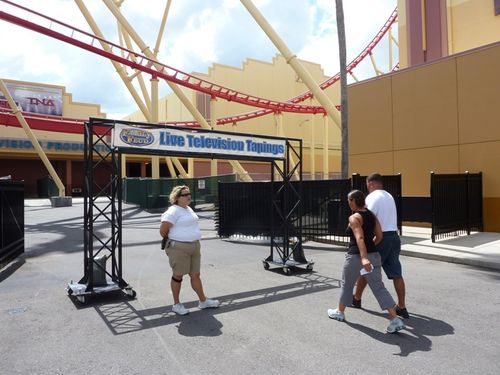 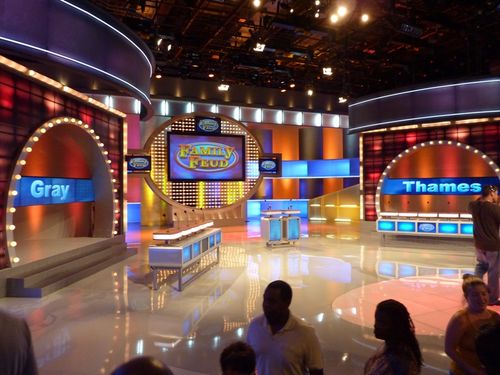 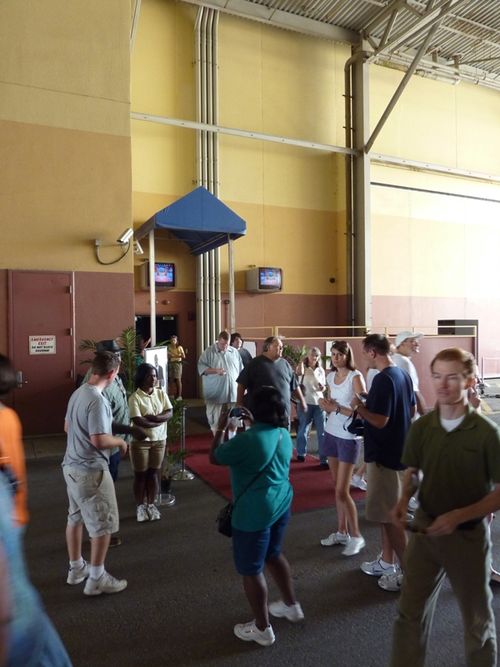