In the last six years, aliens have established themselves on Earth, taking over northern Mexico territories, situated right under the American border. Struggling to fend off the threat, armed forces have made few inroads, quarantining the area while life around the alien nation carries on. Photojournalist Andrew (Scoot McNairy) is handed a mission in Central America, ordered to retrieve Samantha (Whitney Able), his boss’s wounded daughter, and return her to America. On the road to the border of the infected zone, Andrew and Samantha linger and confess, knowing full well that a wedding is in the young woman’s near future. When mistakes cost them easy access to home, the duo buys their way into the alien hot zone, crossing through troubled land as they attempt to enter the U.S. without proper documentation.

“Monsters” isn’t particularly subtle about its subtext, but the film supplies a marvelous introduction for Edwards, a special effects wizard moving into the directorial game. A modestly mounted production, the feature isn’t the picture many will imagine it to be. Instead of “Cloverfield” destruction or “District 9” conflict, “Monsters” steps back, endeavoring to create realism that supports a human connection the script is much more interested in. The lack of screen ferocity is a bit of a letdown, since Edwards has such a great command of mood, filling the film with an unnerving sense of casual catastrophe as Mexico and America go about their business building around the alien impact zone, fruitlessly attempting to eradicate the Lovecraftian creatures with all manner of military might.

However, “Monsters” isn’t about the creatures, it’s about the couple. Damn it.

Limited performers to begin with, McNairy and Able are the focal points for the script, which tracks their relationship from tentative partnership to googly eyes -- a transition fueled by Mexican tequila and sloppy screenwriting. Lacking chemistry and organic steps toward mutual attraction, the subplot feels underdeveloped, especially when Edwards continually returns to the duo’s alleged passion, which feels about as genuine as the CGI on display. It’s a stronger film with Andrew and Samantha in nervous tourist mode, crossing a dangerous land as reserved partners. I applaud Edwards for at least attempting to create some sensitivity to a potentially chilly sci-fi affair, but the effort lacks a real combustibility, rendering long stretches of the feature tedious as the twosome bond through banal conversation. 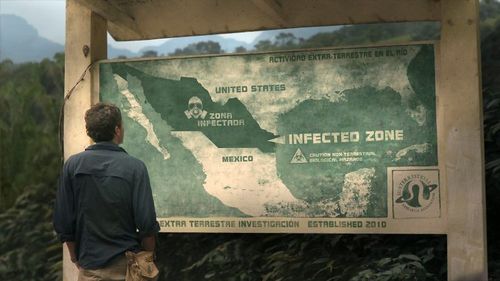 Aliens are here, but rarely explored beyond background figures. Edwards plays with the meaning of the title some, revealing the beasts to be protective parents while the military blasts away indiscriminately. The creatures are executed solidly, creating intergalactic mystery on a tiny budget (studio hype says $15,000, but I don’t believe it), but the most striking images are saved for the desolate landscapes and intriguing production design, which creates a terrain of warnings and threats for our protagonists to wade through, skittishly wandering through devastation caused by overzealous aggression.

“Monsters” might’ve found a more comfortable presentation as a short film, allowing Edwards to trim the fat and intensify his message. It’s a drifting picture, but sporadically gripping and agreeably mysterious -- at least enigmatic enough to help digest a love story that contains zero significance and even less emotional payoff. 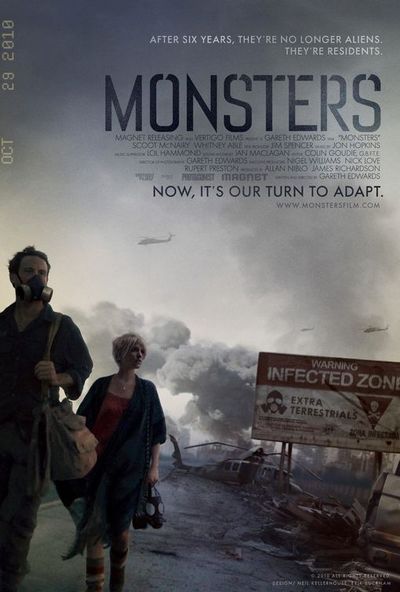