In New Mexico during the winter of 1983, young Owen (Kodi Smit-McPhee, “The Road”) is a bullied boy who lives a solitary life in a bleak apartment complex, taking solace in voyeurism and violent fantasies. Into the community comes Abby (Chloe Moretz, “Kick Ass”), a strange pre-teen who drags around an older man (Richard Jenkins), who outsiders assume is her father. Meeting up during the snowy nights, Abby and Owen forge a tentative relationship, with the boy excited to finally engage someone after his home life has been destroyed by divorce. When people start to go missing in the neighborhood, a detective (Elias Koteas) begins to piece together the few clues left behind, while the two kids gradually open up to each other, with Abby’s dark secrets testing Owen’s excitable loyalty. 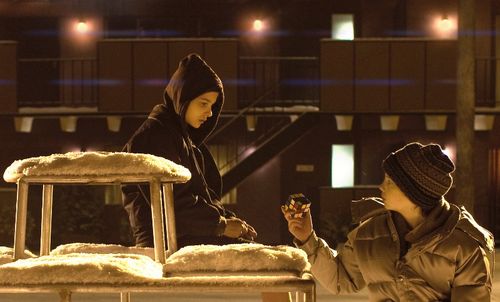 Nitpicking “Let Me In” to death would be a futile endeavor, and one that would lead to great personal heartache. “Cloverfield” director Matt Reeves makes a passionate pass at adapting John Ajvide Lindqvist’s novel to the screen for a second time, shaping a film that has obvious affection for the source material, but remains saddled with a shallow American sensibilities. Reeves submits a metered, overly cautious effort, but he’s facing a tremendous uphill battle trying to bring a tale of underage sensuality, cagey gender discussion, and ultraviolence to suburban multiplexes.

“Let Me In” paints an evocative picture, with the production bending over backwards to sustain a melancholy pitch of snowbound gloom, with dreary New Mexico locales serving as a backdrop to a ghoulish story of monster interaction. Gorgeous lensing from Greig Fraser is a film highlight, with characterizations serviced beautifully by the compositions, spotlighting Reeves’s commitment to constructing a remake with a visual identity of its own, demonstrated through a few bravura camera shots. “Let Me In” isn’t a lazy reheat of the original film, taking its own wintry path to anxiety, delivered with a secure production polish. 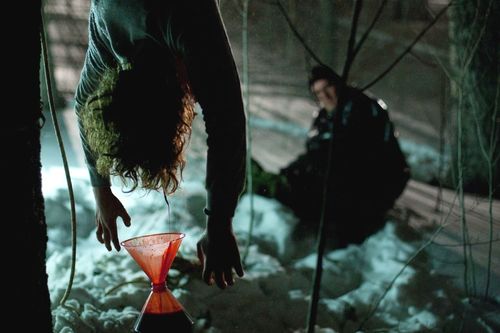 While “Let Me In” is sufficient eye candy, it’s lacking a critical sense of seduction and benevolence, while trying to forge its own fingerprint by reshaping Owen’s community; more reliant on tone than articulation, Reeves does away with most of the peripheral faces of the story. While this keeps all eyes on Owen and Abby, it drains the threat out of the film, with several of the attack sequences rendered as meaningless violence simply to make a beast out of Abby as quickly as possible, losing the crucial steps of suspense to play closer to comfortable genre formula. Moretz and Smit-McPhee are serviceable in the lead roles, but the screenplay undercuts their tension by rushing the relationship, making the interplay less about chilling, enigmatic reveals and more about a blunt partnership, losing the sinister seductive qualities that formed the genius of the 2008 picture. Abby isn’t an alluring question mark to be explored over two hours, she’s an animal from the get-go, robbing the picture of its exquisite sense of alarm, with most story points unreasonably underlined by an intrusive musical score from Michael Giacchino.

As with any remake, those coming to “Let Me In” without a full understanding of the Swedish film won’t understand what they’re missing. It’s a striking picture to study, but a blunt, condensed take on the source material, sacrificing an unsettling sense of macabre harmony to keep elements blocky enough so they might be appreciated by a wide, profitable audience. 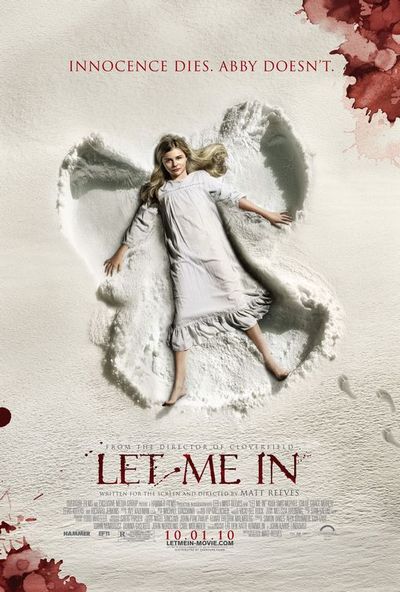