A young, impressionable owl, Soren (voiced by Jim Sturgess) is enraptured by tales of the Guardians of Ga’Hoole, a band of warrior owls who fight protect the innocent, hoping one day to join their ranks. When Soren and brother Kludd (Ryan Kwanten) slip outside of their home one night, they’re promptly kidnapped and brought before the evil queen Nyra (Helen Mirren), who’s building a doomsday weapon with powerful metal flecks, using hypnotized young owls as slave labor. While Kludd finds honor in the wicked “Pure Ones” army, Soren escapes with young pal Gylfie (Emily Barclay), soon meeting up with screwball navigators Twilight (Anthony LaPaglia) and Digger (David Wenham) to help find the Guardians and request assistance. Upon arrival, Soren meets his hero, Ezylryb (Geoffrey Rush), a scarred, elderly Guardian who teaches the impassioned owl his noble warrior ways.

Adapted from the first three books in Kathryn Lasky’s extensive “Guardians of Ga’Hoole” series, the picture does a spectacular job reordering an entire mythology for its feature-film debut. The screenplay by John Orloff and Emil Stern has to juggle a mass of characters and locations, not to mention build a plausible way for an audience to get behind the dreams and concerns of owls. It’s a lovely piece of writing, rooted in traditional hero’s journey ornamentation, but deeply felt, with colorful characterizations that cleanly separate the similarities between the owls. Snyder and the animators bestow each role an individualistic shape to help with comprehension and intensity of threat, but the boldly scripted personalities and flavorful voices inflate the feature with a true sense of soul and genre accomplishment. I was amazed how easy it was to invest myself in the plight of these fierce, neurotic birds of prey.

Known primarily for his visual buffets, Snyder is afforded another level of screen immersion with “Guardians,” using CG-animation from the Animal Logic studio (“Happy Feet’) to the fullest extent. The details of the owls are flabbergasting, but so is the entire film, wrapped up tight with the sort of textures and expression that rivals, even bests, the top studios of the industry. This is a gorgeously crafted feature film, taking challenges of flight and combat seriously, using 3D enhancement to take the audience on a breathtaking ride, soaring into the sky and visiting foreboding lands of danger, with a steady deployment of dimension to open the screen up further. Staging conflicts with his trusty slow-mo at his side, Snyder captures the concentration of the animation, but also its splendor, permitting a lasting look at the action and the antics, presented with patient, stately cinematography. It’s eye-candy on a major scale.

Also stimulating is the Shakespearean plot, which welcomes a winning PG-rated darkness to the picture, highlighting Soren’s struggle with his traitorous brother, along with the destructive plans of Allomere (Sam Neill), a Guardian in cahoots with Nyra and the Pure Ones leader, Metal Beak (Joel Edgerton). Far from violent, “Guardians” nevertheless finds a generous pitch of suspense, taking the war between the bird nations seriously, offering a small body count and immaculately executed skirmishes to emphasize the stakes. There’s impressive weight to the “Guardian” turmoil, keeping the suspense buzzing. However, never fear, Snyder injects some humor into the picture, most centered on antics from Twilight, who desires to chronicle the adventure through song, but lacks needed musical skill.

Speaking of lacking musical skill, the only disastrous misstep the picture makes is found in a training montage, scored to a cringing emo tune from music industry wet blanket, Owl City. “Guardians” is buttressed with a noble fantasy film score from composer David Hirschfelder, teeming with ethereal choral accompaniment befitting a mighty epic. And then Snyder drops in a bewilderingly Raffi-like tune at the very moment the picture requires a lightning strike anthem. It’s goosebump deflation on a major scale.

“Legend of the Guardians” is a sweeping, grand explosion of animated entertainment, skillfully assembled by Snyder and his crew to extract a riveting amount of exhilaration, forging unusual new ground in the genre. It’s a tremendously engaging, inspired movie, and should not be overlooked by family audiences hungry for a rousing change of pace. 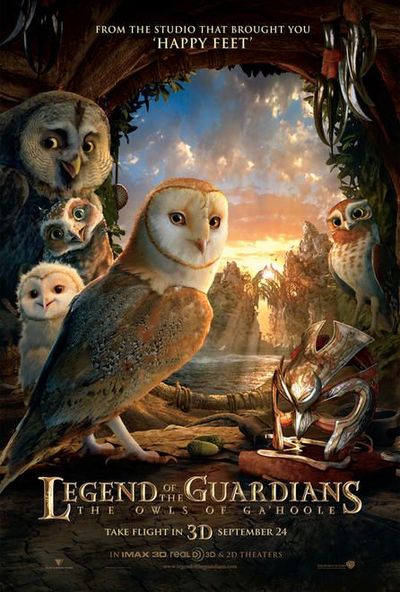 The fuck? Owl City? To quote Sean Penn, "Those guys are fags!"