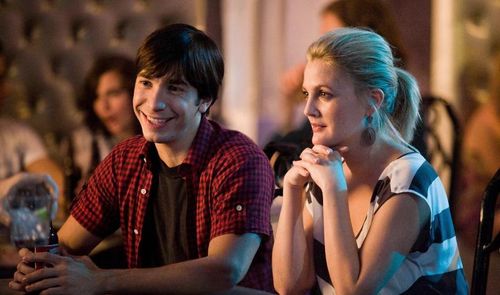 It’s funny, I was just remarking to a friend the other day that more romantic comedies should make Hitler/Zyklon B references. “Going the Distance,” GET OUT OF MY HEAD! Of course, it’s a brief joke in a film of eternal stupidity, but the fact that the director decided to leave in the improvised line speaks to the tenor of comedy this unlikable pile of junk is chasing. I’m sure there were heaps of Darfur and Hurricane Katrina jokes on the cutting room floor.

In New York City finishing off a newspaper internship, Erin (Drew Barrymore) is preparing to return home to San Francisco. With six weeks to go until her flight, Erin meets Garrett (Justin Long), a floundering record label lackey with a special deadpan way. The two spark up a relationship, knowing full well they will separate in just over a month. Like soon becomes love, and while they return to their coastal homes, the couple decides to give a long-distance relationship a shot, despite calls of doubt emerging from Erin’s sister (Christina Applegate) and Garrett’s slacker bros (Jason Sudeikis and Charlie Day). Days turn into months, and while the couple maintains a connection through texts, webcams, and visits, real life choices need to be made, forcing the pair to confront a lonely future apart. 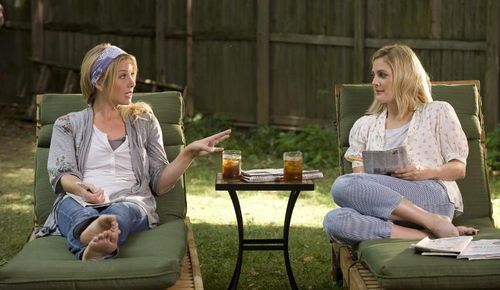 My main concern with “Going the Distance” isn’t its shallow romantic comedy ways, but how the script by Geoff LaTulippe has the nerve to dish up numbskullery for 100 minutes without ever attempting to stay ahead of the audience. All the problems facing Erin and Garrett could be solved with a hearty 10 minutes of genuine communication, but that doesn’t make for thrilling cinema. Instead, the screenplay drags out clichés and strained emotional roadblocks to pad the film up like a peewee hockey goalie, creating an insufferable motion picture that elects to take the longest possible route for everyday couple nonsense. In the end, I was rooting for Erin and Garrett to be close, real close. So I could bang their heads together Stooges-style.

Director Nanette Burstein (she of the sham documentary, “American Teen”) dials up the cutesy behavior with “Going the Distance,” taking a flat sitcom approach to self-absorbed relationship woes. It’s a sluggish directorial effort, with much of the film stuck in improvisational paralysis (Day and Sudeikis are especially grating as the wisecracking, unshowered BFFs, one of which enjoys defecating with the bathroom door open), while Burstein keeps the film unnervingly blue, with a torrent of crude material and salty language to bruise up the picture, mimicking the old Farrelly Brothers playbook. I wouldn’t describe “Going the Distance” as sweet when the script feels like it was handed a polish by Katt Williams. 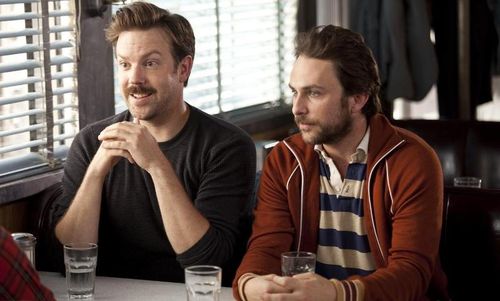 The film is aggressive, hoping to attract more of a male audience by keeping matters blunt, but it’s a forced idea, decimating any chance the picture had at attaining a perfect gooey core. Burstein doesn’t have the skills to pull off vulgarity in a winning manner.

Much of “Going the Distance” is placed into the hands of the cast, which backfires on the production in a major way. While the supporting crew is peppered with obnoxious jesters, the big show is supported by Long and Barrymore. Frankly, they don’t have much chemistry, at least comedically. Long spends the movie fighting hoary set pieces (brace yourself for a wacky tanning booth encounter) with his detached persona, while Barrymore pours on the slack-jawed, wet-tongued Barrymoreness to an irritating degree, making Erin into a nauseating Tweedledum character with mere flashes of relationship clarity. The actress sweats hard to come across cute, but it reads more as brain-dead, rendering the twosome as poor casting, not a pairing to cheer on -- a fact made all the more grating when the film halts in the third act to take the couple’s fears seriously.

Going the Distance” had the opportunity to be sweet and silly, addressing a real-world relationship obstacle in a friendly manner, easily maneuvering through giggles and tears. Instead, we get F-bombs and Hitler jokes. Ain’t love grand? 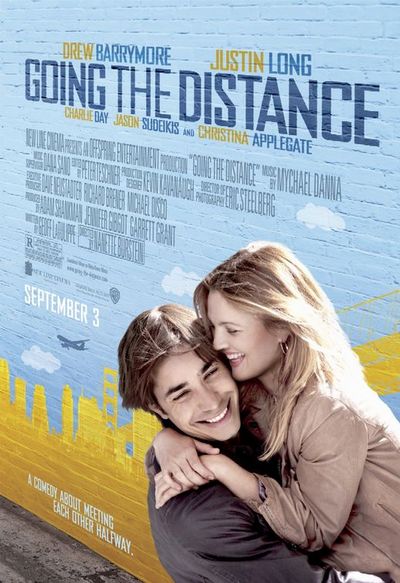