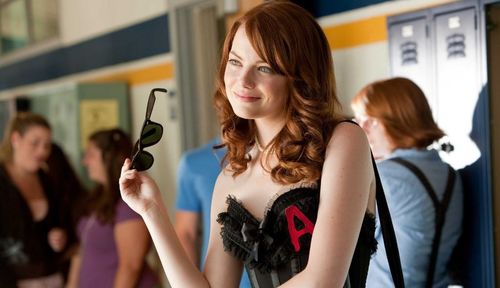 I have little doubt that one day Emma Stone will be a mighty force in the entertainment industry. She’s a hearty, likable, sly actress with a genuine sense of humor, approachable sex appeal, and great command of sarcasm. In sea of CW-bred mannequins, Stone’s real, and her ability to project intelligence is a rare gift. Her brightness is wasted on “Easy A,” a so-called “teen comedy” that feels as though it was written by a fading Gen-Xer projecting his Hughesian daydreams onto a high school comedy of his own. It’s unfunny, glib, and woefully confused. However, it does retain the fresh services of Stone, but she can only carry this nonsense on her back for so long before the weight crushes her moxie.

Olive (Emma Stone) is a gifted student with a sharp tongue, but suffers from a lack of male interest. Lying to her BFF (Aly Michalka) about a sexual conquest to cover for her dull life, Olive finds the story burning through the rumor rounds at her school, creating interest that was never there before. Sensing a power emerging from the fibs, Olive encourages more stories, helping gay and overweight students with their low self-esteem issues, while riding a wave of unexpected popularity. Of course, it doesn’t take long for Olive to feel the downside of her unsavory reputation, with Christian classmate Marianne (Amanda Bynes) kickstarting some trouble that spills over to the faculty (including Thomas Haden Church and Lisa Kudrow).

Director Will Gluck made his debut last year with the cheerleader romp, “Fired Up!,” a disastrous comedy that highlighted the filmmaker’s overanxious attitude, while emphasizing a moldy sense of humor. “Easy A” rivals “Fired Up!” for laughs, spinning through a minefield of caricatures, rumor-mongering, and teen sassmouth without landing a single successful joke. Not a one. It’s a wet blanket of a farce peeled from the Diablo Cody screenwriting school of acerbic fixation, with writer Bert V. Royal expelling more energy lubing up his forked tongue than arranging a sophisticated, throttled dive into the horrors of high school judgment.

Royal wears his John Hughes fandom on his sleeve, envisioning Olive as a self-assured 17-year-old girl who craves a life patterned after the great teen hits of the 1980s. It’s a loose-fitting tribute to say the least, considering how Royal doesn’t actually understand what he’s referencing (pointing out Ferris Bueller’s parade-hijacking burst of joy as a “random dance number,” and proclaiming Bender’s triumphant fist pump at the climax of “The Breakfast Club” as a celebration of his romantic conquest). Royal’s script doesn’t come close to the generosity or insight of Hughes’s dazzling writing, portioning out half-witted encounters for Olive that never gel into a convincing whole, while the rest of the film is trapped in improvisational hell, with every actor lunging to be the sarcastic highlight, treating their screentime as an “SNL” audition tape.

The worst offenders are Patricia Clarkson and Stanley Tucci, who encourage nothing but eye-rolls and urges to walk out of the theater as Olive’s intolerably shticky, uninvolved parents, spending all of their screen time spitting up limp one-liners like a pair of amateur stand-ups. It’s insufferable.

“Easy A” is not an incisive picture, and while Royal is convinced tracing along “The Scarlet Letter” for inspiration (Olive sews a red A on her clothes to own her reputation) is an act of cleverness, there’s so much here that’s only marginally realized, leaving the picture to wander around blindly. Stone is game and paddles around her personality with aplomb, but Gluck doesn’t know what to do with her, pushing the actress to fill the empty spaces in the screenplay with her embryonic comic timing. Yes, even Stone begins to grate once the story applies the brakes in the second act, left to banter with Bynes, make sense of the film’s absurd invasion of product placement, and drum up some googly eyes with a sleepy Penn Badgley, here as Olive’s object of desire. I think. The film doesn’t allow much time for the characters to bond, making their pairing unappealing and insignificant. 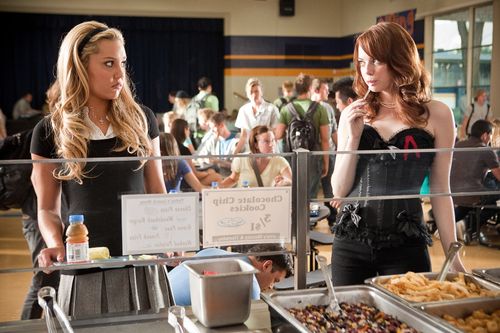 Somehow, Gluck and Royal feel the need to sober the picture up in the mid-section, hauling Chlamydia into “Easy A” as a very real-world spoiler, ruining Olive’s reign as class whore (brought about by two adult characters barely tackled in the story). Chlamydia. You know, just like in “Sixteen Candles.” Now that’s hilarious. Bringing on tears and a mild rape attempt sustains the ugly mood, though Gluck is convinced he’s making quite a profound statement about the sensitivity of the teen heart.

“Easy A” is a rather smug picture, despite Stone’s efforts to keep the mood breezy and cutting. She’ll survive it, but I’d like to see Gluck and Royal actually study what John Hughes achieved during his short stint in teen cinema before they attempt to piss all over his grave a second time around. 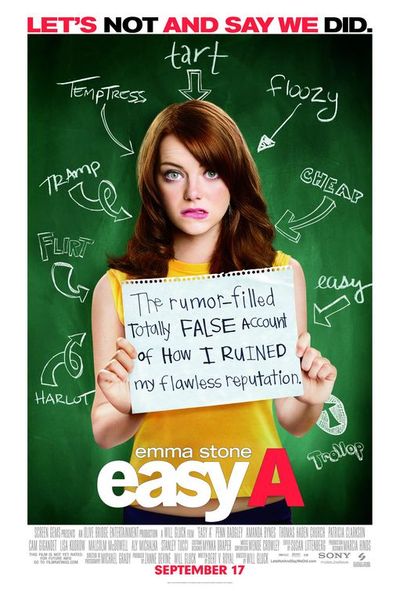 Extremely well written and on target review ... Stone will move on to better things, for sure.

Damn....that was an extremely brutal review
of a movie yours apart I ain't heard a bad word
said about! But I certainly agree, the talented
Emma Stone will be a force in the movie world
in years to come - look forward to catching this
one soon - :)