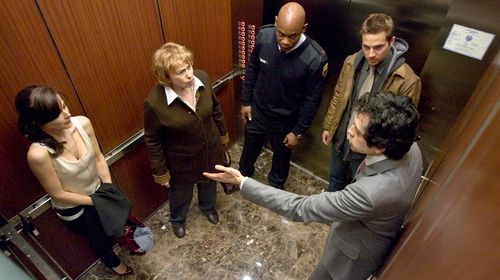 It’s been a rough year for filmmaker M. Night Shyamalan. If it wasn’t bad enough that his monster-budgeted adaptation of “The Last Airbender” was met with a collective raspberry from audiences last summer (thus killing what was left of his reputation), “Devil,” the first film from his “Night Chronicles” horror label, was the subject of immense derision during its recent marketing push, and now Universal Pictures has decided to dump it into theaters without showing it to critics -- a sure sign of studio panic and often a great indication of odious quality. It’s not very often that a film goes from trumpeted to trampled so quickly, but “Devil” is a special case.

A mechanic (Logan Marshall-Green), an old woman (Jenny O’Hara), a temp security guard (Bokeem Woodbine), a mattress salesman (Geoffrey Arend), and a troubled soul (Bojnan Novakovic) have boarded an office elevator in Philadelphia. As the car comes to a stop mid-journey, the group of strangers grows uneasy, finding it difficult to trust one another. As the power fades in and out, it’s clear something is inside the elevator with them, inflicting violence to stir them up, soon taking lives one by one. On the outside monitoring the situation through CCTV is Detective Bowden (Chris Messina), a recovering alcoholic consumed with freeing the group, soon coming to the realization that it’s not ugly human nature that’s killing these people, but Satan itself, who’s brought these strangers together for reasons not immediately clear. 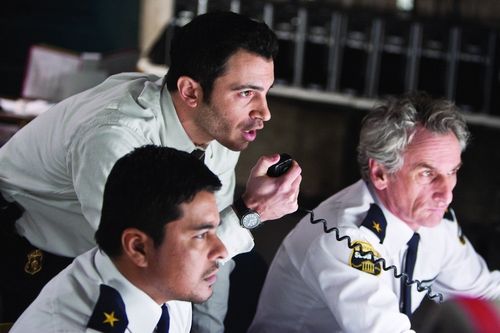 Despite the stink coming off the picture due to Shyamalan’s participation, “Devil” was actually directed by John Erick and Drew Dowdle, the filmmaking team behind the crummy 2008 horror remake, “Quarantine.” To their credit, the Dowdles are prepared to visually combat the tight confines of the elevator setting, milking their low budget to the best of their ability, somehow burning through 75 minutes of alleged tension, scripted with “Twilight Zone” flair by Brian Nelson. The premise (hatched by Shyamalan) is more of a mystery novel concoction than an overt horror experience, leaving all involved at a loss on how to proceed, putting pressure on the Dowdles to keep the movie zooming forward without ever revealing that “Devil” isn’t actually trying to scare anyone.

Though Shyamalan doesn’t take a directing or scripting credit on the picture, his fingerprints stain every frame. It’s one of his delayed reaction screenplays, with a host of actors slowly coming to grips with the trouble at hand, awkwardly talking their way through every step of the nightmare. The story splits into two areas of focus: observing the body count and the mounting paranoia in the elevator, and following Bowden as he pieces together the possibly religious event occurring before his eyes. The mix is surprisingly sleepy, with the concept too profound to make much of a cinematic impression in just 75 minutes, while the Dowdles fight to make the standoff spooky, taking the picture into pure darkness for the Devil encounters, relying on tinny sound effects to preserve their PG-13 rating. I can respect the attempt to feed into the viewer’s imagination when it comes to depicting unholy evil, but the filmmakers keep returning to the safety of a blank screen, deflating the tension of the piece along the way. It soon becomes clear off-camera screams are all the picture has to offer. 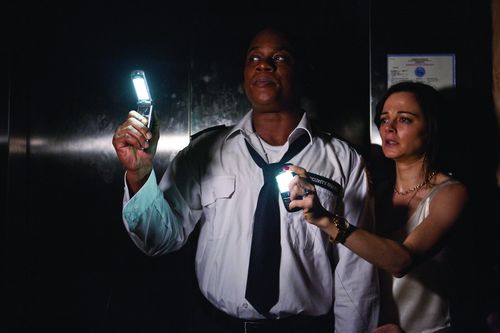 Keeping the film moving along is the score from Fernando Velazquez, who provides some needed orchestral thunder, kicking the film off with a mighty sound. Also effective is the performance from Messina, who receives the feature’s most developed arc as a faithless man confronted with supernatural occurrences that thwart his professional doggedness and alter his view on the afterlife.

Oh, there’s a twist and some heavy misdirection. This being a Shyamalan production, it shouldn’t come as a surprise to find the film attempting to outsmart its audience. I suppose that’s why “Devil” is such a drag at times. Instead of using his name and influence to push something truly maddening and claustrophobic through the Hollywood system, Shyamalan has instead indulged his moldy sense of protracted mischief, providing pedestrian thrills to fans who’ll see every turn of this feature coming a mile away. 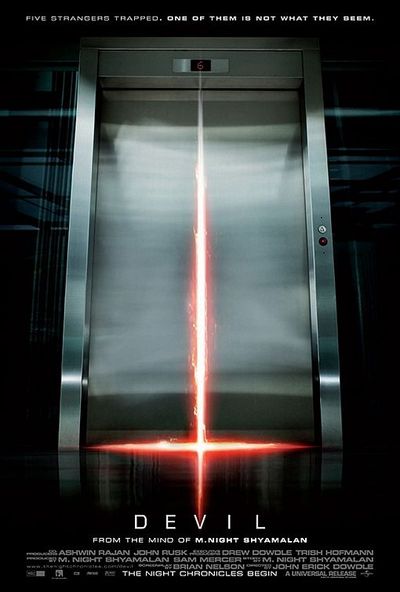 Obviously not a Shyamalan fan -
must admit to being a fond reader
of your website and find your reviews
to be full of life & exciteable - DEVIL
was no exception - I was expecting more
than a C- though but still I look forward
to sampling this movie myself...

It sucks this movie isn't good, considering how nice the art direction has been on the advertising.