It was the film that broke Disney, both in spirit and in the savings account. After nearly 50 years of industry highlights, astounding audiences with storytelling perfection, The Walt Disney Feature Animation Studio ran into a brick wall with “The Black Cauldron,” almost in slow motion. It was a massive box office whiff from a studio used to hitting triples and home runs, brought about great professional misery for the animators working on the film, and essentially killed off the “Nine Old Men” era of Disney Animation, a business that would soon be reborn in the light of the Katzenberg/Eisner dawn. By all accounts, “Cauldron” was a disaster for everyone involved.

Yet, as these stories typically tend to turn, it’s really not such a catastrophic moviemaking effort.

A young farm boy, Taran (voiced by Grant Bardsley) works in the care of enchanter Dallben (Freddie Jones), a flighty old man concerned about a special pig named Hen Wen. A sow with special oracular powers, Hen Wen knows the location of the dreaded Black Cauldron, a magical weapon that could be used to destroy the world if placed into the wrong hands. After the Cauldron is the wicked Horned King (John Hurt), who’s eager to bring about a legion of undead warriors, known as “The Cauldron Born.” When Hen Wen is kidnapped by dark forces, Taran sets out to retrieve his pal, teaming up with the sweet Princess Eilonwy (Susan Sheridan), a daft balladeer named Fflewddur Fflam (Nigel Hawthorne), and Gurgi (John Byner), a mischievous, clumsy creature with a strong preference for apples.

“The Black Cauldron” was adapted from Lloyd Alexander’s book series, “The Chronicles of Prydain,” which spread the struggles of Taran over five hearty young adult novels. The Disney movie runs roughly 75 minutes. Now, that’s not the most generous amount of time permitted to bringing such vast material to the screen, but whatever the picture lacks in lucidity, it certainly makes up for in widescreen ambition.

Gulping down a flagon of thick J.R.R. Tolkien mead, “Cauldron” traces uncomfortably close to “The Lord of the Rings” saga, putting forth a similar tale of fragile heroism, a path of doom spotlighting multiple characters, and an all-powerful object used to control the world. The mirror effect is a bit disconcerting at first glance, but it doesn’t take long for Disney traditions to assume control of the narrative, injecting a cartoon mindset into the picture, thought the shadows still remain.

That heightened sense of evil is perhaps why “Cauldron” failed to come alive during its initial theatrical release in 1985, scaring off the Disney loyal as the company indulged a more sinister tale of villainy. There’s a bleakness to the picture that’s intriguing, but ultimately too unwieldy for directors Ted Berman and Richard Rich, who struggle to maintain the sword and sorcery grit of the source material while enduring studio demand. It leaves the film patchy and inhibited, a feeling engorged by the rickety screenplay, which leaps around blindly to introduce as many characters as it can. The effect is unsettling, torching any potentially ripping pace to pay attention to conflicts with witches, flying elves, and other creatures. Taran isn’t truly much of a hero, but more a submissive tour guide for this land of capricious adventure, stumbling through the story. There isn’t much tension to the picture, and despite some colorful flights of fancy with traditional Disney Animation characterizations, the film is hopelessly stuck in neutral for most of its running time.

Where “Cauldron” shines brightest is in the animation, which eschews a cheery, lyrical tone of Disney fantasy to head into the darkness, with the production seeking out a slightly more modern method of filmmaking. Though I know animation purists cringe at the thought of such a comparison, “The Black Cauldron” comes across like a Ralph Bakshi production at times, with a surreal, menacing quality to the images that create more of a threat than anything found in the writing. The Horned King is a brave step forward for the Mouse House, submitting a villain with ghoulish skeletal features, creating an arresting figure of death. Matters retain more of a bounce when dealing with the likes of Gurgi and his mandated efforts to brighten the picture, but the film retains a beautifully ominous mood, accentuated by a sinister animation effort that deserved a more focused script.

Brought back to life for this anniversary DVD, the anamorphic widescreen (2.35:1 aspect ratio) presentation benefits from a tremendously clean print, free of any damage, making the feature look as striking as it did when it originally debuted. The DVD is crisp and gorgeous, offering a rich, textured look at the film, with animation triumphs and deficiencies easy to spot, adding to the movie’s appeal. Colors are bold and properly separated, with backgrounds showing off a wide assortment of hues and techniques -- the “Cauldron Born” sequence alone is a stunner of green mist and macabre threat. In the age of Blu-ray, the limitations of DVD are present, but the disc as a whole is a remarkable presentation of the film, which has never looked better on home video.

The 5.1 Dolby Digital sound mix on the “Cauldron” DVD is quite healthy for a 25-year-old feature, preserving the film’s echoed intent with a vocal track that pushes away from a frontal position to feel out a more encircling appeal. The dialogue is easy to understand, crisply providing the wide range of voices without any disturbance. Action and environments feed into the surrounds comfortably, with directionals active for magic incidents and villainous efforts, sustaining a threatening low-end when the Horned King finds himself especially worked up. Scoring is pronounced and triumphant, blended well with sound effects and assorted animated touches. French and Spanish tracks are also available.

“Still Gallery” takes the viewer into the development of the picture, along with peeks at the marketing effort for the film and its castle display at Tokyo Disneyland.

“Quest for the Black Cauldron” is a trivia game sending the player on a journey of movie-related questions in an effort to thwart the Horned King’s quest for the titular prize.

“The Witches’ Challenge” is a bartering game, with the player asked to solve riddles to find Taran’s magical sword.

“The Black Cauldron” has been beaten down throughout the years as the picture that choked out Disney Animation, forcing them to reorganize the studio and intensify their efforts. It’s a flawed jumble of a film, but a picture of immense artistic accomplishment and dedication to atypical faces of wickedness. Despite its tattered reputation and sleepy execution, there’s still so much to admire about this red-headed stepchild of a film. 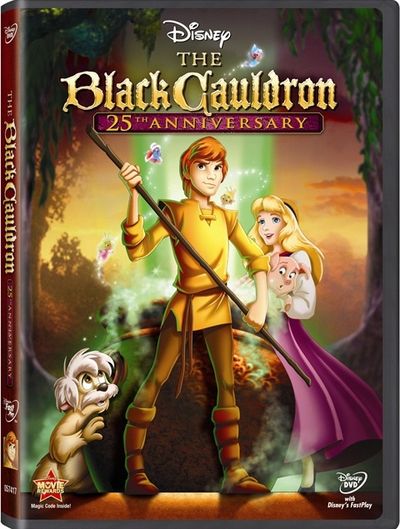 It's a pleasure reading your reviews. Your word choice it always excellent and your descriptions of the film are dead on. I agree with your review. Even though Black Cauldron is one of my sentimental Disney favorites since I saw it in Radio City when I was a kid, it's not as good as it could've been. Your point about it highlighting the evil aspect of the characters such as the Horned King is so true. That's one of the reasons why I love this film, because it has the balls to have a bad side unlike a lot of other Disney fare. It just seems to me that this was before its time as far as children's movies go. Nowadays with all the sorcery and Harry Potter inspired stuff out there, kids probably would more into it if it hit theaters in the near future. The animation is definitely superb as well.