Enticed to an Eastern European forest for an epic game of professional paintball, a team of strangers have arrived blindfolded, armed, and ready for some fun. Once set loose in the endless woods, the team finds themselves under fire from an unknown opponent, who’s using real ammunition to pick off the squad one by one. Panicked, the group flees off the trail, searching for a way to safety while a masked hunter stalks them slowly, offering items of survival to toy with his prey as the game goes on into the night.

A Spanish production from helmer Daniel Benmayor, “Paintball” doesn’t submit a revolutionary cinematic idea for suspense, yet, for a directorial debut, the picture shows some scare zone ability beyond the dreary norm. The story is simple: strangers of all temperaments and battlefield ability hit the game floor, find the rules have cruelly changed, and we watch as they turn on one another as the murderous mood explodes. It’s another variation on “The Most Dangerous Game,” only handed a modern twist of sorts with the paintball setting, playing on the tenuous bravado of gamers handed their survivalist realism wish

Far from a sociological experiment, “Paintball” is primarily a chiller, tracking the escalating panic of the team as they attempt to deduce the threat. Benmayor uses the charged energy of the hunt to work on his camera moves, trying on several one-take showoff shots to summarize the chaos of moment. Of course, anything involving tension is worked over with some brutal shaky-cam nonsense, but a few moments shine, and I enjoyed the use of thermal-vision cameras for the hunter’s POV, which enhances the creepiness of the kills, but also provides unique images of bloodshed, with ultraviolence dialed all the way up to take full advantage of the colorless gore.

Acting isn’t the strongest point of “Paintball,” as most of the cast has a maddening tendency to wail obnoxiously as they near the cold kiss of death. Benmayor could’ve toned down the acting-school histrionics considerably and still achieve the same sense of despair.

The anamorphic widescreen (2.35:1 aspect ratio) presentation is generally clean and open, with the near-monochromatic color palette coming through forcefully, holding the film’s suspenseful mood comfortably. Black levels are solid, with only the more extremely low-light sequences looking a bit on the muddy side. It’s a very limited film visually, electing tension over flash. The image quality here reflects that intent without any distracting digital hiccups.

The 5.1 Dolby Digital sound mix is rich with directional activity, with bullets whizzing around the surrounds, creating an involving circular hold to help goose the thrills. Dialogue is hearty, with a nice echoed quality to reflect outdoor presentation. Scoring cues offer a low-end rumble, but never jump to life.

“Making Of” (26:10) is a basic promotional piece, highlighting interviews with cast and crew (conducted on-set) who explore the film shoot, character motivation, and technical challenges. Some BTS footage is offered, but nothing digs too deeply into the production.

A Theatrical Trailer and two Teaser Trailers are included.

The revelation of the killer is unfortunately more “Hostel” than hostile, with the finale a limply staged extended chase missing the shock of the opening act. “Paintball” runs out of steam long before it ends, but a few striking sequences lend it some personality. Maybe not enough to recommend it entirely, but enough to suggest Benmayor could improve greatly as a director over time. 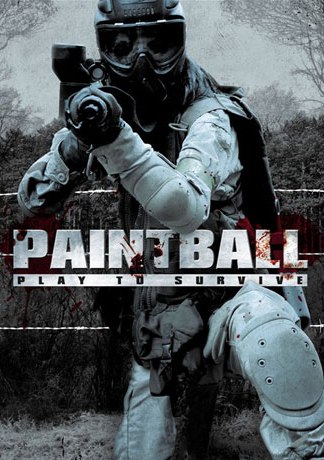