When clichés are put into the right hands, spun with the proper velocity, they turn into Christmas presents. “The Peacemaker” is not a considerate, measured look at global terrorism or Eastern European woes. It’s an action movie, first and foremost, using a certain jig of political awareness to provide a fitting backdrop for breathless chase sequences and wrecking ball heroics. Though it hides under the guise of global commentary, the picture is best approached as a rocket sled experience, diligently pulling together mayhem while tiptoeing around sensitive cultural issues.

When a collection of nuclear warheads is stolen in rural Russia, the U.S. Government takes careful notice of the situation, putting nuclear expert Dr. Julia Kelly (Nicole Kidman) on the case, despite her limited field experience. Anchoring her knowledge is Lt. Col. Thomas Devoe (George Clooney), a military bloodhound who knows exactly how to hunt for such a missing item in Eastern Europe. Chasing clues while putting their lives on the line, Devoe and Kelly make their way to the destructive plans of Dusan (Marcel Lures), a Yugoslav terrorist who wants to make a cataclysmic point in America to avenge the senseless murder of his wife and daughter.

Perhaps best known for being the first film from the newly minted Dreamworks Studio, “The Peacemaker” faced impossible expectations when it was released in 1997. A mild box office performer, the sheer power of the picture was lost to catty industry gossip, with media types reporting more on the studio itself than the nifty thriller they produced for their debut.

I won’t pretend “The Peacemaker” is an intelligent discussion of global terrorism. It’s a few one-liners short of a Schwarzenegger classic, slickly crafted by director Mimi Leder to sprint as furiously as possible while our heroes impossibly dodge bullets and booming explosions. The beauty of the film is its pace, which only stops to take a few breaths before it’s on to the next set-piece, pushing Clooney and Kidman to remain in a state of distress for nearly two full hours. They aren’t the most precise of performances (Clooney was still in his bobblehead acting phase at the time), but the stars summon a sublime sense of distress as the nuclear situation spirals out of control.

“The Peacemaker” is also something of a brave motion picture, taking 17 minutes before anything resembling a Hollywood A-lister or even the English language shows up to assume control. Opening with a stark locomotive hijack sequence, the picture announces itself straight away as an unpredictable mainstream distraction, electing to engage viewers early with unsettling theatrics over marquee glamour.

Once the stars do arrive, the picture tears off after the bombs, following Devoe and Kelly as they violently interrogate baddies, study maps and evidence, and, in the film’s best sequence, engage in a little demolition derby with villains in the middle of an Austrian town square. There’s a strong militaristic slant to the screenplay, but it consists mostly of the John Wayne variety, as Devoe hurls himself into trouble spots in an effort to protect America from harm. Though it requires a relaxation of the brain, Leder supplies an electric rush of filmmaking, only tripped up by a few moments of outdated-even-for-1997 sexual politics. The script kills the fun by making Kelly a bowl of Jell-O instead of a commanding bulldog.

The AVC encoded image (2.35:1 aspect ratio) presentation is mixed bag, only supplying extravagant BD opulence when the action remains in brightly lit areas of engagement. The shadow detail here is generally muddy, creating some informational roadblocks when it comes to evening sequences, or especially hair and fabrics. The opening nighttime hijacking is a prime example of the disc’s limitations, providing a clotted view of the action. Colors are hearty and pronounced, with military green and outdoor yellows making a substantial impression. Facial detail doesn’t always shine through as desired, but the general worry and grime of combat is readily available for survey.

The 5.1 DTS-HD sound mix is a boisterous affair, allowing for wonderfully heavy moments of conflicts, with gunshots and explosion kicking up welcome low-end rumble, carrying through the entirety of the mix as trouble worsens. Scoring (from Hans Zimmer) also remains immense, gifting the surrounds a needed ethereal hold that’s blended well with all the weapon discharges and military atmospherics. A mid-movie helicopter assault also presses on the listener superbly, conjuring the proper hold of airborne confusion. Dialogue does sound tinny at times due to the intensity of the action, but nothing is swallowed. French, Spanish, and Portuguese tracks are included.

“From the Cutting Room Floor” (3:01) is a gag featurette, showcasing the goofball antics of Kidman and Clooney as they blow lines and bond over mistakes.

Though “The Peacemaker” is a cracking ride for most of the picture, Leder somehow kicks the film into overdrive for a grand finale set in New York City, bringing the nuke hunt home. The 2010 me felt a little uncomfortable watching a terrorist casually stroll through the city with a nuclear bomb stashed inside of a backpack, but the post-9/11 icks are fleeting, as Leder keeps the action Hollywood enough to enjoy as escapism while the chills slowly crawl up the back of your neck. Sure, television has assume command of the fingernail-chewing political thriller genre over the last decade, yet “The Peacemaker” is a critical reminder that nothing’s quite as dynamic as fully bloomed, gung ho, widescreen descent into possible worldwide destruction. 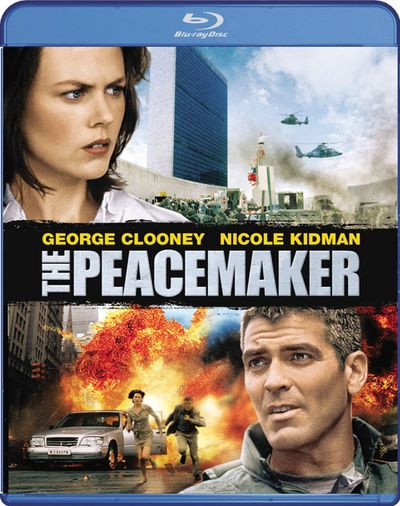