“The Experiment” is a film of immense movie stupidity. It’s an illogical suspense picture with ties to sociological history, but the filmmakers don’t even bother to bring some actual sense to the screenplay. Tiresome and poorly acted, the picture insists it’s a meaningful creation able to reflect the world’s woes, summoning brutality to make a point about callous human nature. Unfortunately, the feature misses a lasting significance by a country mile, stumbling around while attempting to pat itself on the back.

A pacifist with a heart of gold, Travis (Adrien Brody) has just met Bay (Maggie Grace), the love of his life, at the very moment she’s off to visit India for a spiritual awakening. Needing quick cash to fund a trip, Travis signs up for a special experiment that pays handsomely for 14 days of study, joining a group that includes timid Barris (Forest Whitaker), redneck brawler Chase (Cam Gigandet), and graphic novelist Benjy (Ethan Cohn). Sent inside an empty prison to simulate life behind bars, the group is divided between inmates and guards, handed a set of rules to follow as a series of cameras monitor their every move. After a day spent settling in, it becomes clear that Barris takes his law enforcement position seriously, turning the prison into a nightmare of violence and humiliation to maintain his upper hand.

“The Experiment” is ultimately a remake, updating the 2001 German film, “Das Experiment,” while maintaining ties to the infamous Stanford Prison Experiment, which constructed the same civilian vs. civilian psychological standoff in 1971. Obviously, it’s a premise ripe for serious moral and ethical reflection, handing the fragile framework of human interaction over to those unprepared for such responsibility, with many taking the opportunity to indulge their own sadistic tendencies as the cameras watched in silence.

For the 2010 reworking, “The Experiment” has been boiled down to a crummy acting exercise, with writer/director Paul Scheuring (creator of “Prison Break”) cleaving away story to allow the cast ample room to broadly articulate madness, treating the prison floor as professional wrestling, populated with heroes, villains, wimps, and traitors. These are men to cheer and jeer, not accept as complex individuals. While their primary motivation is money, little else is revealed about the participants outside of Crayola-stained backstory moments, infusing the film with cartoonish insight, not a full-bodied understanding of impulses. Instead of a chilling exploration of abuse, we’re offered caricatures, and nonsensical ones to boot -- Half-Mexican actor Clifton Collins, Jr. pops up here as a heavily tattooed white supremacist, making his gang the most accommodating Nazis I’ve ever heard of.

As mentioned earlier, logic is not a friend to “The Experiment,” which spirals into a frustratingly bland routine of guards abusing inmates. In the original experiment, the prisoners accepted the mistreatment as a form of psychological submission, but this feature isn’t the original experiment. This is a motion picture with little time for character nuance, making the transgressions impossible to accept, especially when the film establishes early on that violence from the guards will have consequences. Instead of immediate questioning, the prisoners take the abuse without any reason given as to why they would allow such a clear contractual violation. It takes time for the meek to make a fist, with Schuering pushing the film further off course by basing Barris and Chase’s rage in sexuality, thus robbing the brutal twosome of a richly complex depiction of corruption.

While contained almost entirely to a single setting, the AVC encoded image (2.40:1 aspect ratio) presentation is excellent, with a crisp, cool read on the brutal mood of the picture. Shadow detail is marvelous, gracefully supporting the action through darker circumstances, while colors are stable and sharply separated, with flashes of bolder hues making a sharp impact during the run of the film, with special attention to reds and darker blues. Facial detail is superb, allowing for a full inspection of reactions and medical complications.

The 5.1 DTS-HD sound mix retains a considerable amount of character, with the production using a wide range of aural tricks to keep the listener involved with the action. Directionals are extensive, best served with echoy bursts of prison floor violence. Scoring cues are spare, but also dimensional, blended acceptably with the claustrophobic incidents. Dialogue is always within reach, pushed up front for maximum clarity, with comfortable separation.

Though handed defective characterizations, the performances head in the wrong direction, going broad with madness, with Whitaker chewing the scenery as the boner-popping alpha guard. It’s a dreadful bit of acting, with the film seeking to match his flail in the final act, where the picture goes from taunts and thwacks to a full-scale riot, erasing whatever social discussion there was left to enjoy. Scheuring does summon the energy to end the picture with a “The More You Know” closer, but it’s a laughable period at the end of a baffling sentence. 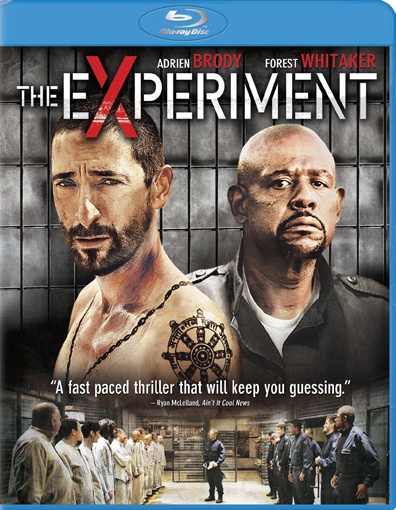 I must admit that I have not seen the prior film Das Experiment. Had I seen that, it could have affected my opinion of this movie because I could see what it did or did not live up to. That aside, by no means did I find this to be a great movie, but I didn't find it to be that bad at all; rather, it was pretty interesting.

I'll start with two things that didn't make sense to me. First, I didn't understand why the prisoners wouldn't clean their plates once that rule was understood. (I'm serious.) If you're going to be paid $14K for following the rules, you should be willing to force yourself to eat food that doesn't taste good. I mean there's Fear Factor and the taboo of what you are eating on top of the grossness. Yet, the prisoners wouldn't eat crappy tasting beans. Second, the guard who is beaten and becomes a prisoner is bloodied. Wouldn't the "social scientists" monitoring the experiment find this as circumstantial evidence that the "no violence" rule was violated when it was picked up by the camera? Either "no," or that wasn't the point of the experiment.

The ending wasn't confusing to me. SPOILER ALERT. The "it's over" and humanity kicking in I suppose made sense. There was no more need for violence, everyone could walk home. But I really felt the murderous rage of the prisoners and wanted the guards dead just like they did. I would have been more satisfied if they said "f*#k it" and murdered them anyways.

The room without cameras I'm sure was part of the grand design of the experiment. Even assuming otherwise, it was plausible that the rules could be violated in there. And the hitting of the prisoner who hit Barris (I believe), could be be seen as something other than "violence" on the guard's part. Well, the red light didn't go on in any case. (I say this with some sarcasm.)

I wasn't taken aback by the fact that little was revealed about the characters. I took the movie as a collective look at most of the characters and didn't really want to know much more than was revealed in their paperwork and interviews. I think it would drag on or lose focus if it did. And sure, money was the sole or primary motivation (typically), but near the end you see consciousness rapidly change as things really escalate and get out of hand.

I don't see how Forest Whitaker bombed this role. You see his inner tension as he "steps up to the plate." There are psychological contradictions and you can see it in his facial expressions. He ultimately sacrifices his humanity. And you can see the remorse at the end when he gets it back. I find nothing shallow or one-dimensional about this performance. Power dynamics play out in his mind and around him simultaneously.

Some people would say the red light symbolizes god, but I think that is looking into things too much. To me this is just a movie that aimed to be both psychological and sociological and for that I was satisfied with the ride. Either way. Maybe what I got out of it was different than what was intended. It seems like The Experiment was striving to make a big statement about human nature in its most debased form, how we're "just animals" ("but maybe more?"). Yes, homo sapien sapiens are animals. But I don't care to suppose human nature is ultimately one way or another. I think the society we live in (or whatever environment we're in) can bring out our best or worst qualities.

It seems like nearly every sentence of Brian's review is filled with utter disdain for this movie. I mean calling Adrien Brody's character a "pacifist with a heart of gold." It's like "oh snap, he gonna change and go against his values." Come on.

And the abuse was not necessarily a contractual violation, at least at first. (There was the warning that Civil Rights may be violated.) I mean, if the rules were strict then when Travis patted Barris early on in the experiment that would have been a violation because the prisoners were not to touch the guards. The form of abuse seemed to hinge on "what is violence?" You could say that denying insulin shots was violence. At the same time, there was not supposed to be anything coming in from the outside. (It also seemed implied that upholding order took priority and could mitigate violations through retribution.)

The government testing through the "corporation" was primarily psychological and aimed at finding peoples' breaking point. It is not that far-fetched to see the experiment as furthering some malevolent government interest in finding ways to prop up the system of private profit and assert global dominance.

I enjoyed seeing people change and decide it's not worth it. Barris tried to hold on the longest.

Well I don't need to comment. Chas said it all. To sum up I loved the movie and this would have been a really great movie to watch in a theater had there been a smooth transition until they got into the real experiment.