An archer in King Richard the Lionheart’s crusade army, Robin Longstride (Russell Crowe) has decided to end his duty, escaping into the forests with Will Scarlett (Scott Grimes), Little John (Kevin Durand), and Allan A’Dayle (Alan Doyle). After witnessing the treachery of Godfrey (Mark Strong), a trusted English henchman working clandestinely for the French empire, Robin assumes the identity of a fallen soldier, returning to Nottingham to send word of Lionheart’s death to powermad Prince John (Oscar Isaac). There, Robin is taken in by the dead man’s blind father, Walter Loxley (a spirited Max von Sydow), and introduced to his widow, Marion (Cate Blanchett), convinced to continue the charade to keep peace as Godfrey tears up the countryside in a mad plan of profit and murder. Finding the war for England’s future at their doorstep, Robin and the fallen territories team up to take down Godfrey and push away encroaching French forces.

In many ways, “Robin Hood” could be classified as a prequel, which isn’t perhaps the most cinematically challenging route of scripting (credited here to Brian Helgeland), but, at the very least, it gives the film something to do other than detail banal do-goodery and the hollering antics of the Merry Men. By taking matters back to the beginning, the script allows Scott an opportunity to organize his own order of business within the ancient tale, using Robin’s path of identity to position the usual “Hood” suspects, a motley crew that also includes a bee-keeping Friar Tuck (Mark Addy) and the Sheriff of Nottingham (Matthew Macfayden). The storytelling effort isn’t irresistibly volatile, but Scott pumps some rousing agitation into the production, which has fun playing directly into the colorful legend while stripping down “Hood” to the bitter basics.

Scott’s become a real connoisseur of these battle epics, with “Gladiator” and “Kingdom of Heaven” acting as a proper primer for the spectacle in “Robin Hood.” Due to the drain of the crusade years, the bloodbaths are kept to an enjoyable minimum, as Scott reduces the number of soldiers but increases of chaos to a pleasing blur of swooshing arrows, clanging swords, and yowling death. While Scott can’t let go of his visual crutches to communicate admittedly stale sequences of warfare, the elements remain effective, due to the straining cast and the pounding score from Marc Streitenfeld. Indeed, the film resembles countless other period war films, but the difference here is the birth of an outlaw, cleanly displaying the character’s disenchantment with royal leadership, finding his conscience to be a more rewarding moral compass.

Hoisting “Robin Hood” to the heights it reaches is the ensemble, which covers a delightful collection of faces and screen temperaments. In fact, there’s so much thespian might swung about, Robin Hood has some trouble holding the attention of his own film. The screenplay lurches around striving to build a new framework for Robin and his ascension into selfless heroism, stuffing the picture with a host of characters developing their essential motivation. The bustle of names and places brings around confusion at times, especially to anyone not up on their Robin Hood fundamentals. It’s not a particular irritant, but the film does wander away from its core ingredients on occasion to play a few rounds of Risk, satisfying history junkies.

Holding down the fort wonderfully are Crowe and Blanchett, who share tender chemistry as the couple thrown together by chance. Crowe is expectedly brawny as Robin, but it’s not a rabid performance, showing more introspection than I was aware Scott was capable of allowing, tracing that man’s alarm as his chance encounter with the Loxley family uncovers a distant past of daddy issues and riddles of steel. Blanchett is generously fierce as Marion, balancing the requirements of rural hardship with a flicker of faith as she comes around to Robin’s heartfelt intentions. The duo works well together with limited screentime, saving the greatest stretch of the Robin/Marion love story for a potential sequel, which immediately registers as a colossal disappointment, yet gives hope that a return trip to Sherwood Forest might hit a perfectly melodious note of affection for this iconic pair.

“Robin Hood” is presented in two versions on this BD: a Theatrical Cut (140:26) and an Unrated Director’s Cut (155:48). The Director’s Cut is clearly the richer, more substantial film to watch, greatly improving characterization through extended interactions between Robin and Marion, additional violence, clarity in storytelling, and, most importantly, a restoration of the “Runaways of Sherwood” subplot -- a team of feral children who factor into the desolation of Nottingham, along with preserving its fiercely heroic heart. The group dynamic is baffling in the Theatrical Cut, making the clarification a sweet revelation.

Scott shoots for an earthy, candlelit look to the picture, but the AVC encoded image (2.40:1 aspect ratio) handles the difficult challenge quite well, putting forth a textured, moody presentation that befits the mythical temper of the film. Detail is abundant, capturing the finer points of the costuming, locations, and facial reactions marvelously, with a nice film-like fine grain to lend the frame some life. Colors are subdued, but useful, with an extended push of amber and green used to convey the rural nature of the screenplay. Blood red also makes quite an impression, kicking through the palette. Shadow detail holds steady through some impossible evening sequences, preserving information that helps feel out the dangers of the dark. No print damage was detected.

The 5.1 DTS-HD sound mix is a seriously directional event, with a impressive swirl of arrows and violence (even bees) to keep the listener invested in the adventure at hand. Atmospherics are equally encouraged, with forest and beach locations providing a marvelous position in the story. Dialogue is frontal, but reliably clear, hacking through some wild accents to find a comforting middle ground for the rest of the action to shoot from. Skirmishes provide a mighty clang, with horses and armies sustaining a healthy, active low-end. Scoring is a touch too tinny, but never distractingly so. DVS, French, and Spanish tracks are included.

“Director’s Notebook” is a pop-up feature that runs during the picture, stopping to showcase production featurettes, stills, storyboards, “Ridleygrams,” and general filmmaking effort. Considering the rest of the BD’s arrangement of supplementary features, this elongated informational journey isn’t convincing, perhaps best saved for those who prefer a stroll to a sprint when it comes to a Hollywood production exploration.

”Rise and Rise Again” (62:41) is a magnificently extensive take on the production of the movie, offering painstaking attention to the elements of filmmaking, with cast and crew interviews covering most departmental efforts. It’s a blessedly honest (there’s talk of the original “Nottingham” script, and Crowe is in rare form here) snapshot of the epic as it moves from planning to shooting to post-production, stopping along the way to clarify the effort it took to put together a fresh take on “Robin Hood.” This documentary is marvelous.

”Deleted Scenes” (13:06) cover clarification and further development of Robin’s moral center, some extra tomfoolery with the Merry Men, and includes a brilliant moment of communication between Marion and Walter. A few extended moments are offered as well, embellishing implied moments in the finished film. They can be viewed with or without useful commentary by editor Pietro Scalia.

“The Art of Nottingham” offers viewers a snapshot of the pre-vis/storyboard effort, productions design, costuming, and a gallery of behind-the-scenes photos. The collection of pictures and video offered here is highly detailed, covering these specialized fields of interest with exhaustive attention to detail.

“Robin Hood” is unkempt and frayed around the edges, but the fortitude of the film is surprisingly sincere. It doesn’t frolic like Flynn, delight like Disney, or careen like Costner, but this rewiring of the Robin Hood fable splatters around the muck agreeably, hitting soaring points of romance, villainy, and daredevil archery, sold with atypical vigor from the traditionally sleepy Ridley Scott. 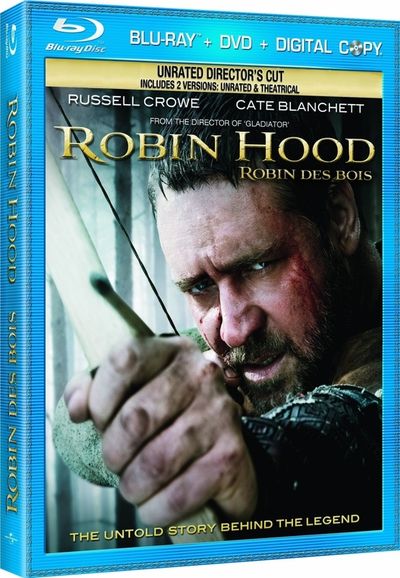