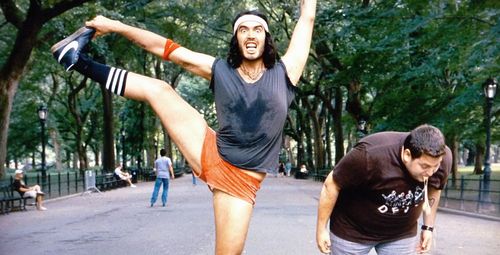 A lackey at Pinnacle Records, Aaron Green (Jonah Hill) dreams up a grand idea to return rocker Aldous Snow (Russell Brand) to the stage for a special anniversary concert after years of partying, a tumultuous relationship with girlfriend Jackie Q (a shockingly silly Rose Byrne), and various misguided musical efforts have tarnished his legacy. Exciting his boss Sergio (Sean Combs, who kills here), Aaron is sent off to London to retrieve Aldous, bringing him to New York City for a television appearance, and then off to Los Angeles for a triumphant concert at the legendary Greek Theater. However, in the company of a known hedonistic monster, Aaron is dragged along on a wild adventure that involves raucous parties, tempestuous family reunions, and a vast reservoir of paranoia.

Continuing on from his “Marshall” directing duties is Nicholas Stoller (who also scripts), designing a “My Favorite Year” odyssey for poor, hapless Aaron; it’s a festival atmosphere that highlights the young go-getter attempting to tame a well-documented rock rapscallion on the way to a stage redemption he hasn’t exactly earned. The formula is familiar, yet the results are often startlingly hilarious, bouncing between sly industry gags and drippy, winningly awful gross-out humor. The mix is volatile, but that’s exactly what electrifies “Greek” beyond its ho-hum origins, handing off these ripe, drug-fueled comedic situations to the capable cast, who improv and shuffle their way around the frame while Stoller captures the throttled silliness.

Brand is ideal for this type of material, possibly pulling from his own life experiences to articulate Aldous’s endless prodding personality and penchant for chemical excess. He’s a more sideswiped character than the one introduced in “Marshall,” with the rocker down on his luck, looking for some form of salvation, finding a white knight of sorts in his easily manipulated handler, Aaron. Brand is a scream, bouncing off Hill beautifully as the script gently accelerates the nonsense while introducing some sensitivity as Aldous deals with the various domestic issues (daddy, baby, lady) that weigh him down. Returning to the motor-mouthed, spit-slicked persona that’s served him well, Brand sustains the picture’s sense of humor, best played when Aldous guides Aaron through some heinous acts of overindulgence. In what amounts to the straight man role, Hill supplies the disbelief and gluttonous imbibing with ace timing, perfectly embodying a humble, whipped man blasted in the face by waves of music industry excess. 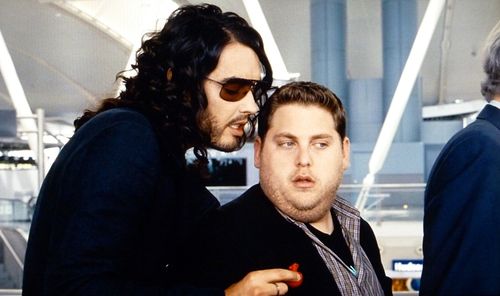 “Get Him to the Greek” is presented in two forms: the Theatrical Cut (109:11) and the Unrated Cut (113:51). As with any Judd Apatow BD experience, the longer cut merely adds some fat in the form of gags, a few involving the snorting a cocaine and…well, ants. Funny stuff, but any first viewing of the film should stick with the leaner cut, just to be safe.

The AVC encoded image (1.85:1 aspect ratio) presentation is marvelous, with some light grain adding a film-like texture to the image, providing excellent detail to the bizarre happenings. The picture enjoys quite a large amount of visual information, with the action heading to the wilds of the urban jungle, supplying bright neon and dense outdoor environments, which encourage the colors to an ideal degree. Reds and blues explode, sustaining the party mood, with extravagant costuming is a disc highlight. Skintones are accurate and expressive, while shadow detail is supportive, keeping the energy up in low-light locations. Especially during the more hedonistic scenes, there’s plenty of clean, crisp action to observe, nicely served up on this BD.

The 5.1 DTS-HD sound mix maintains the film’s frantic atmosphere with a happily directional effort that keeps the madcap all around the listener. Dialogue is extremely pronounced and eager, even keeping Brand’s more mumbly antics in perfect harmony. Soundtrack selections enjoy sharp, dimensional fidelity, with a hearty low-end rumble to encourage the rock sensations. Performance scenes retain a warmly echoed sensation, with full atmospherics for crowd responses and club interiors. Scoring is light, but effective. Spanish, French, and DVS tracks are also included.

The feature-length audio commentary with director Nicholas Stoller, producer Rodney Rothman, and actors Russell Brand, Jonah Hill, Rose Byrne, and Elisabeth Moss is expectedly jovial and humorous, but it’s also a little chaotic. Moss and Rothman participate by phone, while Brand shows up late to the event, leading to a slightly rambling listening experience, though it keeps moving along at a good clip, providing more jokey interaction than hardcore commentary information. Stoller seems a bit reticent to actually dig into production minutiae, but he makes for a competent leader, keeping the group in a chatty mood. It’s entertaining, but only marginally helpful, best appreciated for location discussions and joke assignments.

“Getting to ‘Get Him to the Greek’” (32:07) is the official making-of featurette for the film, covering conception to the actual shoot. Interviews with cast and crew offer platitudes, but the BTS footage is generous and amusing. The featurette is made to sell the picture, but the little chunks of behavior are fun to watch. Some of the camera tricks employed to enhance the movie’s nonsense are revealed as well.

“Getting in Tune with the Greek” (13:47) focuses on the music angle of the picture, which pushed Brand to provide something of a singing effort, while a team of songwriters and performers assisted in the construction of a faux rock star. Recording studio footage is entertaining, watching how some of these filthy tunes were brought to life.

“The Making of ‘African Child’” (6:26) is an in-character documentary from Aldous Snow, observing the creation of his most spectacular career misfire. Sparing no expense or opportunity for self-promotion, Snow reached for the brass ring with this single and accompanying music video.

“Karaoke” offers a chance to sing along with the film’s performance sequences and videos, along with “Dracula’s Lament” from “Forgetting Sarah Marshall.”

“Gag Reel” (10:18) is a standard collection of mix-em-ups, with a special cameo from an earthquake, which interrupts a take and sends Jonah Hill into a mild panic.

“Line-O-Rama” (9:12) spotlights the improvisational efforts from the cast, as they run through endless variations of filthy one-liners. Everyone in the cast gets in on the action.

“Deleted Scenes” (18:20) return some amusing interactions between Aaron and Aldous, along with a hilarious bit of failed intimacy with Aaron’s girlfriend, Daphne (Moss). Also included is a funny cameo from Alanis Morissette, some philosophy from Sergio, and the eternal question: did black people steal rap from pirates?

“Alternate Intro: The Castle” (5:53) presents an early look at Aldous’s discontent, observing his troubled domestic life and his swan dive into alcoholism.

“Blind Medicine” (2:31) is a peek at a medical sitcom starring Sarah Marshall, viewed briefly in the film.

“Interviews” (18:02) collects all the interrogation sequences from the film, showing off Aldous is various states of disrepair.

And a Theatrical Trailer has not been included.

While “Marshall” employed the nightmarish qualities of an emotional breakdown to cradle the laughs, “Get Him to the Greek” is more of an impulsive, slapstick creation, leaning on the snappy one-liner skills of the two leads, while Stoller dutifully sets the dominoes. It’s broad, playfully bizarre moviegoing experience, sure to be one of the most agreeable comedies of the year. 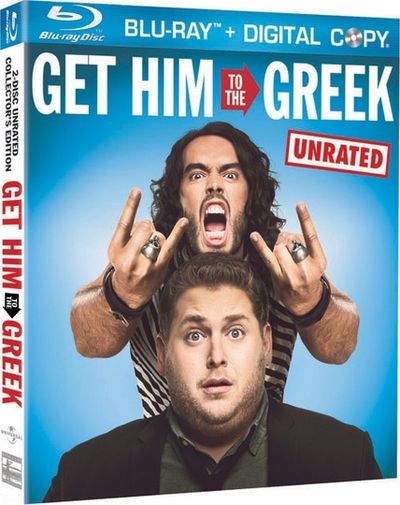